Cape Point could be next for Cape Town ‘laaitjie’ Cameron Bellamy, who spoke to SABBEX about his 56-hour Caribbean crossing from Barbados to St Lucia

1) You survived – but only just. How are you feeling now?

The first two days in hospital were quite bad and it’s been a slow road to recovery now. My lips, two weeks later, still bleed every once in a while.

2) Has your tongue returned to normal size? (that sounded scary)

My tongue was back to normal after a week, although I still can’t taste anything. 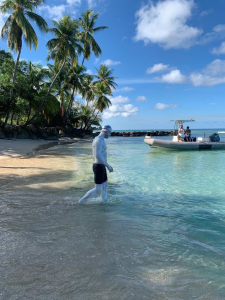 3) How did you come up with the idea of this particular crossing? Was it years of planning or spur-of-the-moment?

I had originally planned to swim from Cuba to Florida, but three weeks before the event the US government denied our application to go to Cuba. This was a great plan B. I’ll still do Cuba one day.

4) How difficult is it to organise something like this? Do you need lots of authorisation, or is it just jump in and swim for it?

Logistically it is very difficult, especially in only three weeks. Lucky I have Kristina and a great team around me.

5) Talk us through the 56 hours: were you feeling strong in the beginning?

I felt OK the first day. The 2nd day was very hard, the water was about 32 degrees C forcing me to swim very slowly. The final day cooled a bit and I pushed it quite hard to finish the swim.

6) At what point did you start regretting it?

I never regretted it. It was amazing being out there in the open ocean. 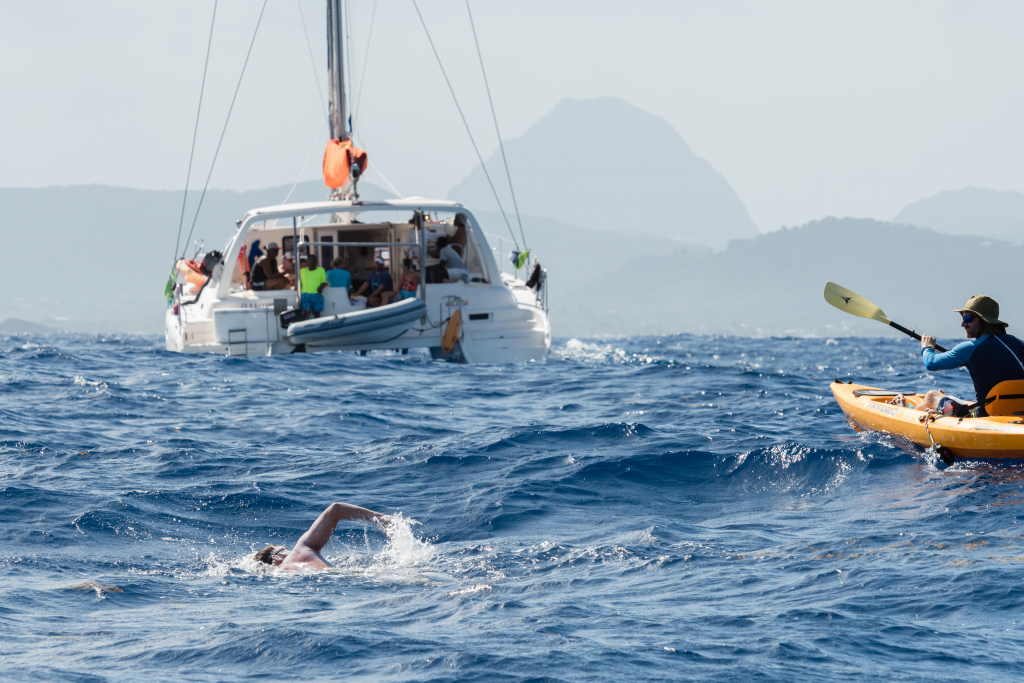 Yes, at 30 hours, when it was at its hottest, I had doubts. But as soon as I got through the hottest part of the day and started feeling better I knew I’d make it.

8) How does it work with the support team? How do they feed you etc?

I drink every 30 minutes and eat every hour. I swim to the back of the boat and they pass me food/drink. I’m not allowed to touch anyone or the boat.

9) Are they motivating you along the way? Pep talks?  How important is all of that?

Yes, to an extent they encourage me, but they know how motivated I am and what I’m capable of. I don’t think they ever doubted I would make it.

10) How often do you rest? Presumably floating on your back?

11) Did you plan a period of calm seas? What were the conditions like?

It was very smooth for the first two days. The last night and day the wind and swell picked up considerably. Yes, we actually bought the swim forward two days to make the most of the good weather. 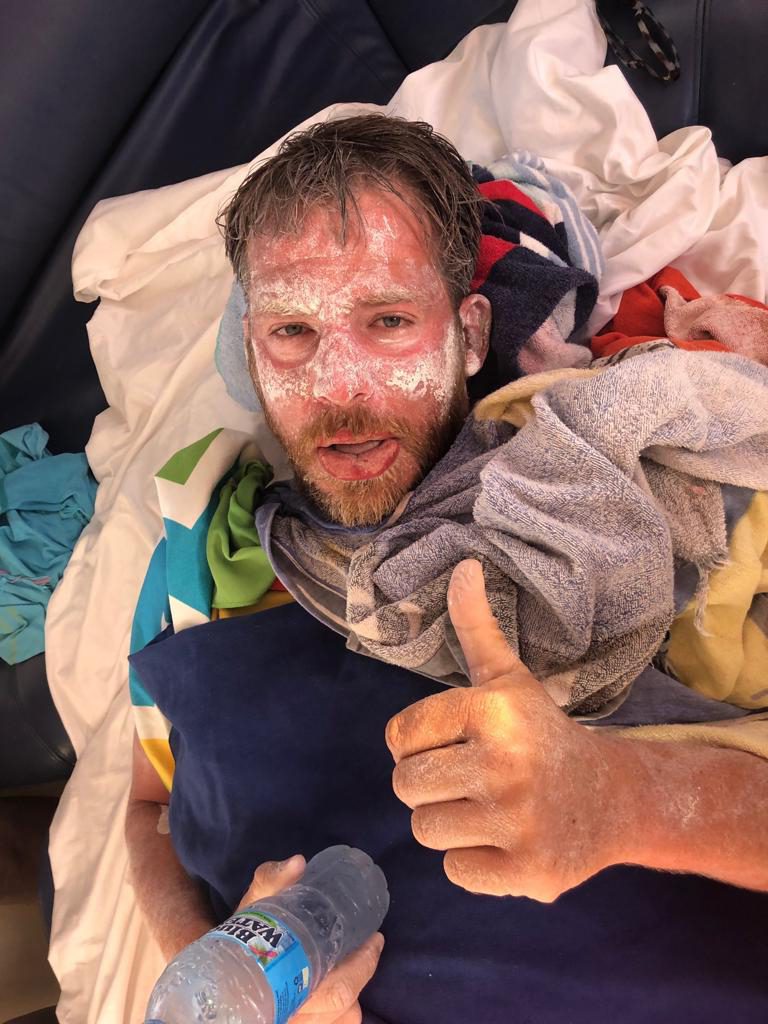 12) Apparently the current was against you for the last mile or so..? Otherwise were you swimming with it?

There was no current for the first two days then the current picked up in my favor. The last couple of hours the current was against me.

13) Do you see anything around you or below while you swim? Or is it quite a lonely experience? What about marine traffic?

You don’t see much. At times I wish a shark would swim by.

14) 56 hours is a crazy long time to take a dip.  Did you do sleep deprivation training beforehand? How difficult was that aspect?

It’s extremely difficult but your adrenaline keeps you going and I also take a lot of caffeine during the night time.

I don’t do any sleep deprivation training beforehand, although I do 24-hr training swims.

15) Was that the most difficult aspect, or was there something else even more awful? The ‘Salt Mouth’?

Yes the salt mouth (extremely painful) and heat were the hardest, I was also stung by a Portuguese man-o-war during the first night which was very painful.

16) You are an entrepreneur in San Francisco. What do you do when you aren’t trying to kill yourself?

I work for the company I started, in cybersecurity and compliance, and also run my charity, the Ubunye Challenge, which focuses on Early Childhood Development Projects in the Eastern Cape of South Africa and Zimbabwe. 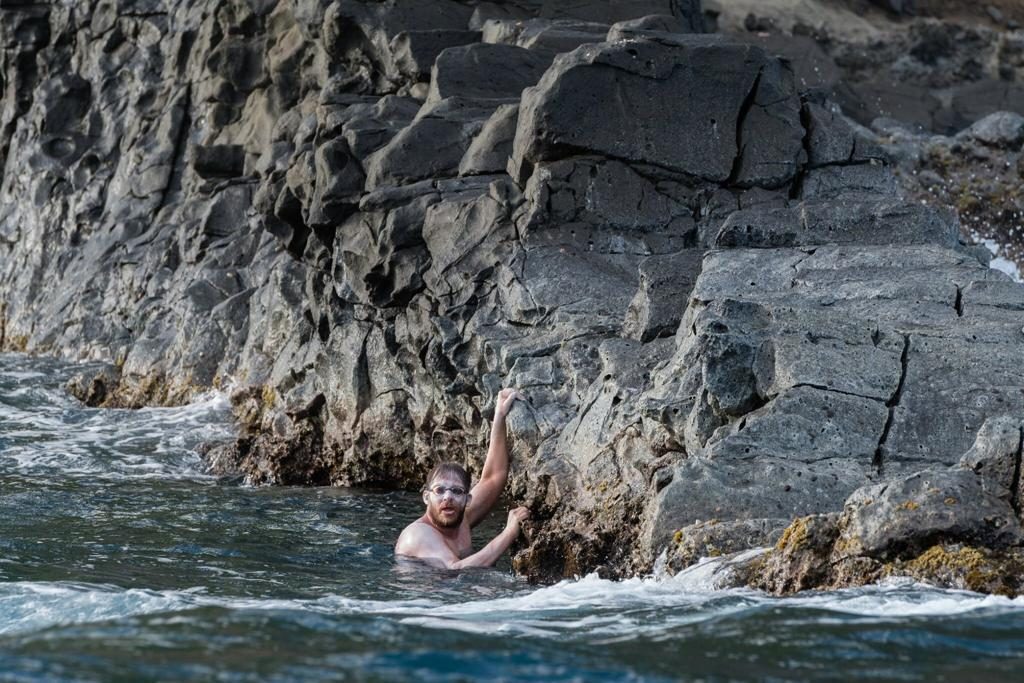 17) What is your fundamental motivation? The charity work or the adventure / personal challenge / breaking records?  Or elements of all of these?

All of these, but in particular I really enjoy the training and doing the actual events, the uncertainty around them and the pure adventure aspects really motivates me.

18) Is there an environmental awareness aspect to what you do? Sea pollution?

As a charity I support education in rural areas. As everyone is probably aware, education and conservation are very closely linked. As such, as a charity, we support environmental awareness through supporting education.

19) What’s next? Swim across the ocean? Or will you go back to rowing?

My next project will be a rowing one, very soon, however I can’t announce the details just yet.

20) What about coming back to swim around Cape Point. We don’t have sharks anymore. Interested?

That’s always been a big goal for me!

2019-10-08
Previous Post: INTO THE ABYSS
Next Post: THIRD TIME LUCKY:  DURBAN BOAT SHOW TO BE TRANSFORMED INTO CITY LOGISTICS EXTRAVAGANZA