Cape Town boat builder discovers there is no shortcut to success with dramatic Zambezi River launch.

Former Port Elizabeth boat builder Alf Tinker knew he was jumping in the proverbial deep end when he gave up his job to start his own business in Cape Town.

But he might have thought twice had he known his first job would involve lowering a vessel to the bottom of the one of the world’s biggest waterfalls, to tackle boat-eating rapids. 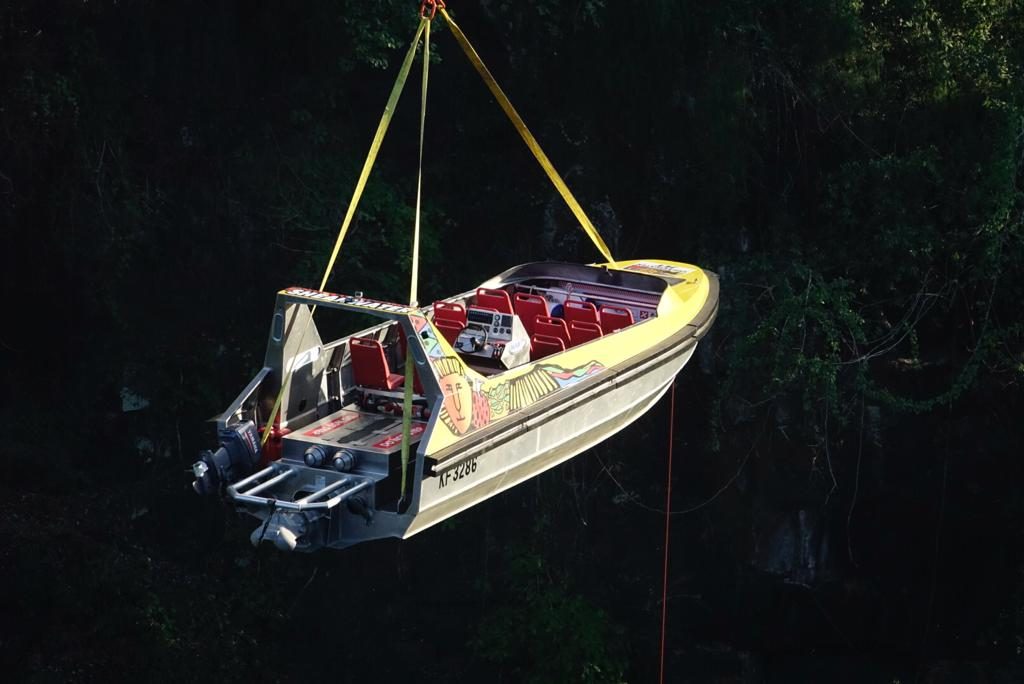 The never-say-die MD of Mountain Marine, who teamed up with Mako Marine for the jet boat project, admits there were a few nervous moments as they planned to launch their 8m aluminium boat off the famous Victoria Falls Railway bridge. Thankfully everything went according to plan, the vessel is now safely ensconced inside the mighty Zambezi gorge below the falls, and Tinker is busy with a second hull to be launched in the Southern Cape.

“That was probably the most impressive part,” says Tinker of the nerve-jangling task of craning the jet boat into the gorge. “There were two boats in there previously, glass-fibre boats. But then Vic falls came down in flood and these boats got taken out, never to be seen again.”

“After that there was nothing really happening for a while.” 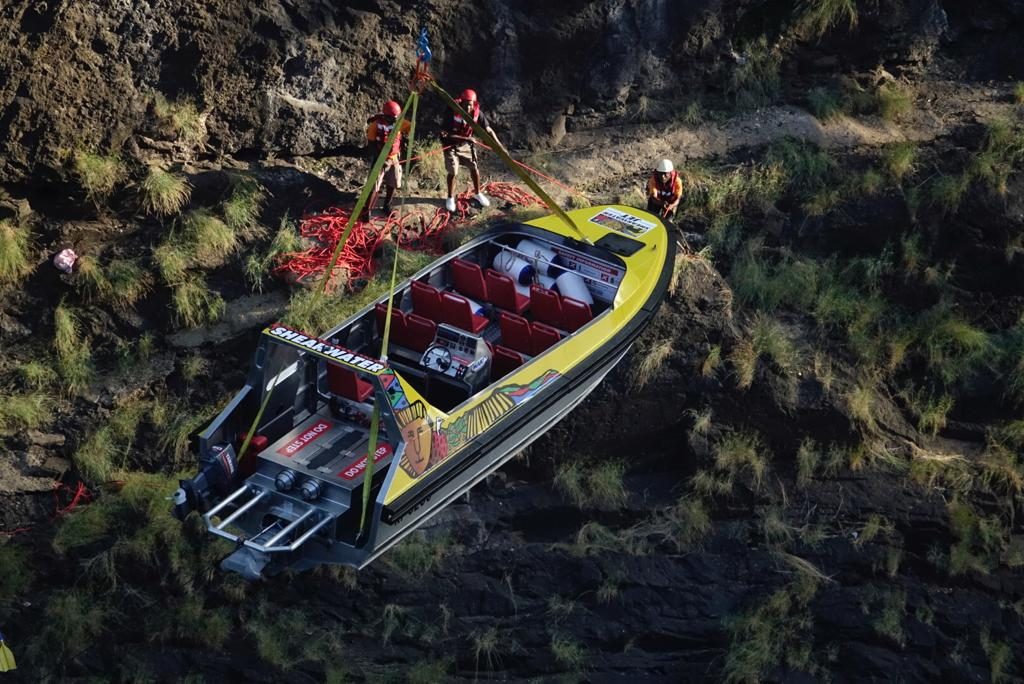 Into the void stepped Tinker.

Perhaps buoyed by the knowledge of what happened to his predecessor’s boats below Vic falls, Tinker and his design team came up with something suitably robust, with high gunwales, a foam core and a Volvo Penta engine coupled to a Doen Jet. They built it in two months and it launched earlier this year. Says Tinker: “They needed it in record time. It was an awesome project which I did with two partners, for tour operators Shearwater. 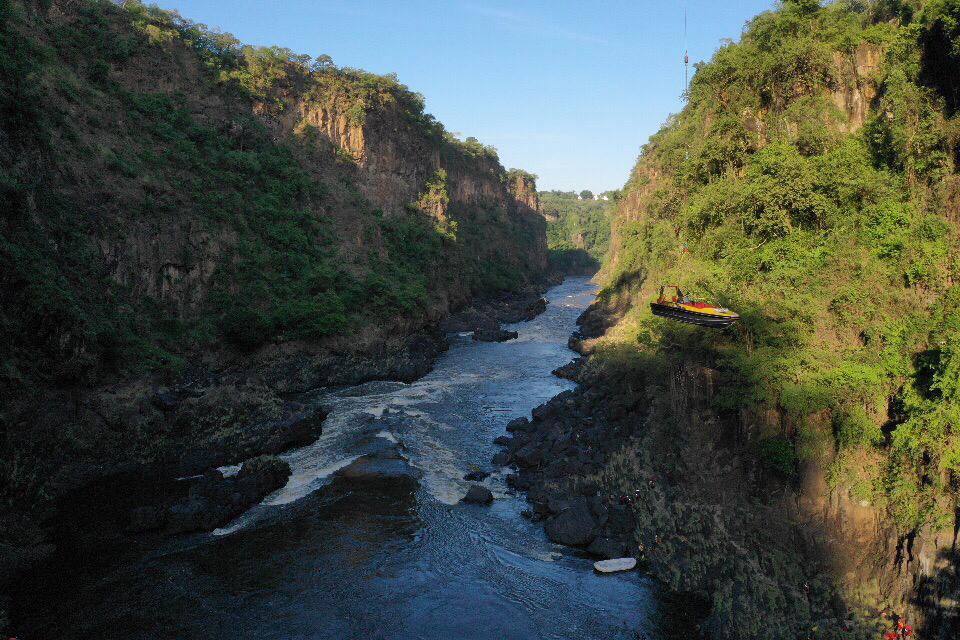 Tinker admits the project almost passed him when it first cropped up while he was busy relocating to Cape Town. Fortunately it landed on his desk again shortly after the launch of Mountain Marine, based in Montague Gardens. “We jumped at it and signed the contract. The boat hadn’t been designed.” He worked closely with Mark Louw from Mako Marine and Keith Davies from KD Marine Design.

The challenge was to produce a vessel strong enough to muscle its way up to the brink of ‘The Cauldron’ without dumping a cargo of wide-eyed foreigners overboard: easy in principle, not-so-simple when you consider the force of one of  Africa’s biggest rivers gushing through a crack in the African bush. Tinker could at least draw from his experience with big and small boats, having worked for various yards on large builds as well as in a yard producing smaller vessels. “I know what can and can’t be done with smaller vessels,” he says. “What it really amounts to is that they don’t need massive speed, but do need lots of traction to make the rapids.”

Despite a few teething problems related to the engine /jet combination, the project has been a success, and Tinker is now busy with his second boat – and possibly a third for another Vic Falls permit holder.

Tinker is cautiously optimistic about replicating the boat for other tour operators, but he doesn’t see much scope in South Africa: “I don’t think we really have a fortune of places where one could run that sort of operation. There are a couple of rivers. But not like Vic Falls with thousands of people arriving.”

With a bit of luck he will realise his ambition of growing his market share at the Tavern of the Seas. Says Tinker: “To build a good boat is one thing, to get it out on the market is another.”

Then again if Tinker can get a boat into the Zambezi gorge, he can get surely get it just about anywhere. 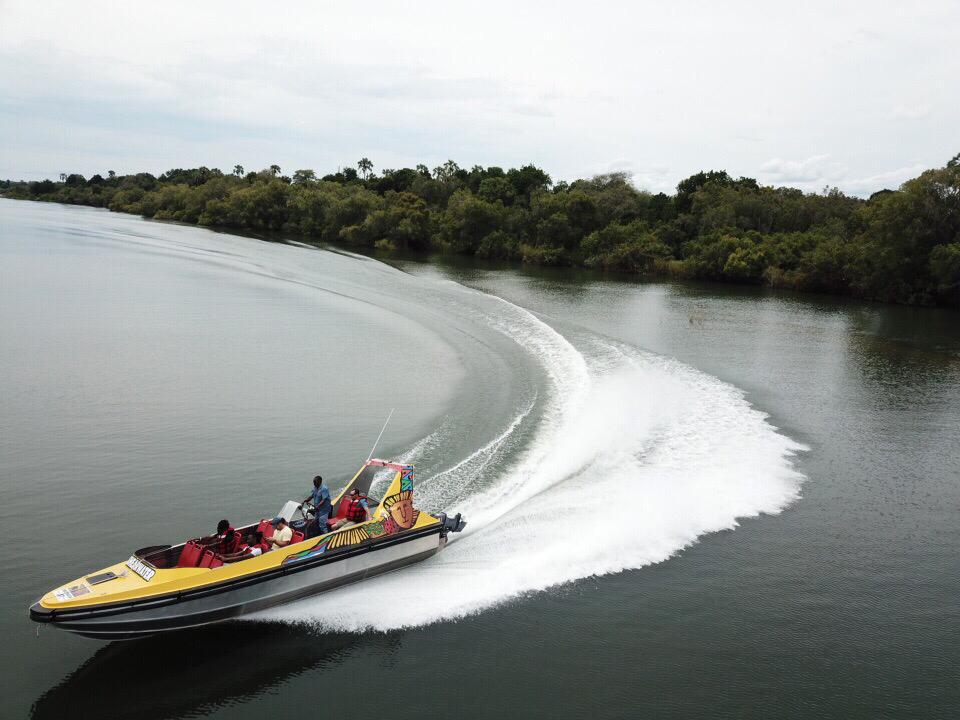