Just when they thought the water might never return, Manten Marina came within a few centimetres of being flooded by the surging Vaal River amidst widespread flooding across much of the interior.

Late last year the marina was still high and dry, besieged by noxious blue green algae with the Vaal Dam level dipping below 30%.  Fast forward a couple months and only the timely opening of the Dam’s sluice gates saved the marina from inundation. “The sluices were opened literally with a couple of centimetres to spare or we would have flooded our marina,” said Kathy Manten in response to SABBEX questions. “It is a wonderful relief to have water in the dam again. The water is now almost level with the ground level and it is beautiful. It has attracted thousands of tourists to the town just to see the water and to see the sluice gates gushing thousands of litres out of the dam.” 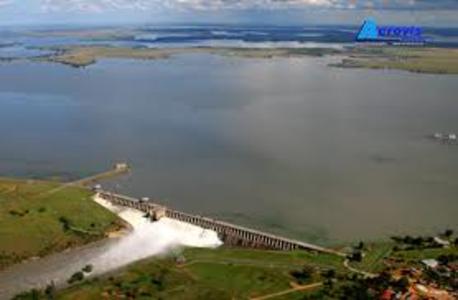 Manten Marina is situated on the banks of the Vaal Dam near Deneysville. The facility was one of several impacted by the critically low water level last year which prompted some yacht clubs to remove yachts from the water. Boaters were also forced to do battle with noxious algal blooms caused partly by pollution flowing into the river system.

But the recent deluge, which included runoff from a large tropical storm that charged in from the Mozambican channel, has flushed the system and brought much-needed relief, Manten said. “The excessive rain has assisted in flushing sewage and pollution out of many areas,” she said. “The dam has a bit of blue-green algae although this has not been all that prevalent over the last week or two due to slightly cooler weather, rain and increased water flow.

“Prior to that, we had a few days where the prevailing South Easter blew all the stinky gunge right up to our harbour wall. It stinks terribly when it is very hot and it starts to ferment and bubble. It affects our restaurant which is literally on the edge of the dam in the harbour. Animals and people need to be very cautious of swimming in it as it is very toxic,” Manten said.

Sewage pollution into the Vaal from crumbling municipal infrastructure has prompted intervention from the South African Human Rights Council.  The SAHRC published damning findings in February, identifying the failure of Municipal waste water infrastructure as a key reason for ongoing pollution in the Vaal River system. They recommended that Cabinet authorise National Government to intervene in the running of the Emfuleni Local Municipality.

Welcome rains have also kept emergency personnel and conservation authorities busy in recent weeks as rivers continue to swell.  In the Richtersveld a tourist party had to be rescued from the flooding Orange River, including a man who was washed 35km downstream. He managed to clamber out of the river onto the Namibian bank and made it back to safety.

2021-03-10
Previous Post: SALDANHA’S INDUSTRIAL DREAMING ZONE. IS IT FINALLY COMING TRUE?
Next Post: PIRATES BEWARE! MADE IN SA SENTINEL VESSEL ON ITS WAY TO TROUBLED WATERS