A NEW DAWN FOR PWCs? 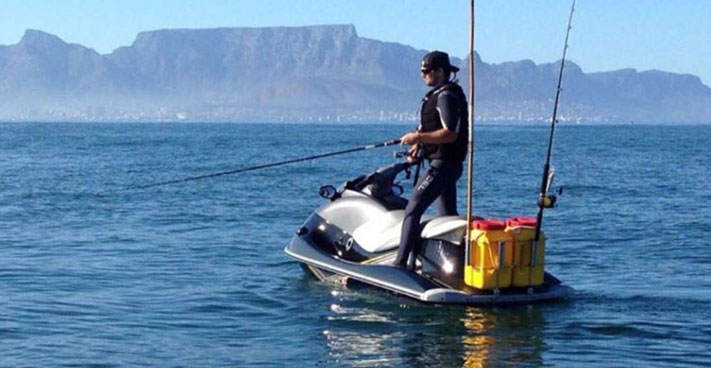 GB: Yes. PWC’s have been unfairly targeted as a result of the early days when there was no proper regulation or control and they were all 2 stroke powered. The fashion was to add go-fast exhausts and race around jumping waves giving legit reasons for public complaint regarding noise and pollution and the minority “10 percenters “  and ignorant friends who invaded bathing and other sensitive areas.

30 years on the products have evolved to bigger more sedate craft with sophisticated 4 stroke motors – they are quiet and meet much more stringent (than applied here in SA) emission  standards from USA and Europe.

We estimate 60 % or more are now used for “jetski fishing” and in terms of SAMSA regulations are mostly classified as vessels and are treated as normal small craft, so why should they not be allowed to traverse an MPA just like any other craft.

GB: It has been at least a 20 year battle for my colleagues and myself with Jeremy (Johnson) leading the charge for the past 8 years or so.

Current retail prices put them in the same price bracket as a small skiboat so discerning passionate people are the target market. There will be a small increase in sales but due to the premium price we don’t believe it will be too significant – ie we don’t expect a rush of buyers into this market and flooding the MPA’s.

GB: Jetski fishing is just taking off in Australia and is relatively small in USA and Europe.

SA leads the world in Jetski fishing development and the invention of the pods or tubbies as we call them that make the craft more stable and act as fish and equipment hatches. SA has much more stringent offshore safety regulations and significantly less safe and easily accessed offshore launch sites than USA or Australia so general recreational (not fishing) usage in these two countries is huge and users have more rights than we do here but having said that they do have marine reserves where usage is not allowed.

The problem here was other craft including conventional boats with jet propulsion, diesel motors, normal outboards and others were allowed to traverse an MPA but PWC’s were excluded by definition with no explanation forthcoming from authorities when challenged. It seemed to us that there were some personalities behind the scenes who were putting their personal opinions into the decision making mix.

The irony is that these same authorities were very quick to ask organisations who offered craft for safety purposes when they were needed from time to time.

PWC’s are now essential tools in lifesaving (SLASA and local authorities) and the NSRI thus giving credence to their seaworthiness and usefulness.

We fully support the creation of MPA’s and the protection of our natural habitat but simply ask that a properly registered PWC in the hands of a properly trained and licensed operator be given the same rights of usage as any boats in the same category.