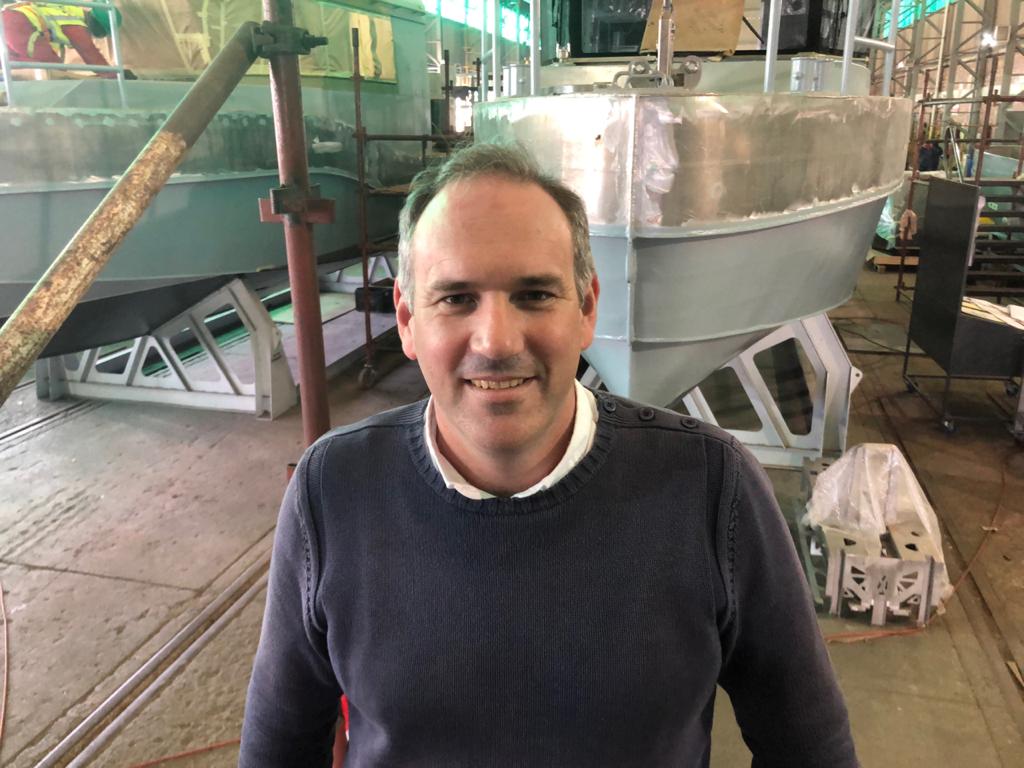 Maybe it’s him, maybe it’s me, maybe just lockdown dementia. But Veecraft Marine boss Stuart McVitty seems physically pained not to be able to shake my hand. Instinctively his paw hovers, a large mitt compared to mine, half extended but now with nowhere to dock at this time of Covid-19 workplace protocols.

Under different circumstances it looks the kind of hand that would deposit a beer into our handshake, or into any available pocket if needs be – such is my distinct first impression upon meeting one of South Africa’s top boatbuilding executives.

The handshake aborted we move through an air of convivial commerce in the front office of Veecraft’s Elliot Basin facility where I am greeted by everybody in sight. We visit the kitchen to brew some coffee, and take masks off to drink it. McVitty has a smiling face that invites conversation, and we are soon at it, chatting about the latest Covid despairs and disruptions. Then we move on to boats and what drew him to them. McVitty unpacks his past in a thoughtful and affable fashion, an easy-going narrative laced with snippets of personal reflection. I am not surprised to hear he was an early life graduate in customer relations – but more about that later.

McVitty credits his father for his interest in watercraft. Joburg-born Alan McVitty (of Outeniqua Choo-Tjoe fame), a civil engineer by training, has been a passionate boater for his whole life.  Says Stuart: “That came from growing up in Jozi and sailing on Cinderella Dam in Boksburg with home-made boats.”

The passion passed to Stuart who grew up in Cape Town and recalls a boyhood staked out with sailing expeditions in the Langebaan lagoon, interspersed with visits to his grandparents in the Free State.

Stuart seemingly also inherited his father’s love of tinkering in the garage workshop, evidenced by his love of restoring boats. He particularly enjoyed wakeboarding and waterskiing.

After school he initially followed in his father’s footsteps by studying civil engineering, despite hankering after naval architecture – he was put off by the prospect of studying in Southhampton. He switched tracks to study business management and marketing, and then hospitality, motivated by his family’s stake in the Knysna hospitality trade (notably Phantom Forest). Along the way he studied in Franschhoek at the famous Relais & Chateaux hotels. After that it was back to Knysna to be closer to the water”: “That’s when I got back into boating – it was very much a hobby.”

From there it was back to Cape Town for a stint at Caudwell Marine, high-performance marine engine manufacturer, where he worked on water engine testing and validation. His timing was impeccable; Caudwell were developing a 4-stroke engine for the F1H2O circuit. McVitty got to race boats in Dubai and call it work.

At Caudwell he spent quality time with the charismatic Mike Beachy Head of whom he speaks highly. Recalls McVitty: “I remember going to an interview in a hangar. He (Beachy Head) opened up these curtains to reveal fighter jets and a Porsche, and said ‘Welcome to Beano Boys playroom’”

McVitty also set up his own online directory, Boats Direct, a maritime portal “directing business to the various manufactures, dealers, suppliers and organisations in the marine industry.”

It was around this time when McVitty’s career received a little prod in the blue water direction from boating industry stalwart Dave Abromowitz, who needed somebody to skipper and manage one of his luxury boats in the Mediterranean. “That sounded very romantic,” says McVitty, who duly persuaded his girlfriend to take a sabbatical for a year. “That turned into two years, and then into three years.” Along the way the couple bought a house and got married, testimony to the cosiness of life in the crew cabin of a Princess 67. “We got to know each other pretty well,” he says with a smile.

Hosting VIP clients at close quarters also continued the customer relations learning curve, and McVitty returned to Cape Town enriched by years of star-spangled conversations with many learned businesspeople.  “At the time you don’t think about it,” he says of his Mediterranean networking, “but later on you do look back and say, OK, that was valuable.”

But while his life was drifting towards the suburban Cape Town, it still needed a berth: “I came back to SA with no real job. I had been beating the drum a bit on the network for a year leading up to our return, and when I got back some old colleagues of mine had spoken about Nautic.”

“I got in touch with them and it turned out they were looking for a project manager.”

Thus began a new chapter that continues to this day, with McVitty moving from the frothy edge of South Africa’s boatbuilding industry right into the engine room. From canapés and cocktails in Mallorca, he now fumbles a coffee plunger like the rest of us in the bowels of Cape Town industria, surrounded by the grit and grunt of workmen and machines.

With hindsight his timing was good; in 2015 Nautic Africa had just been absorbed into the Paramount Group as part of an acquisition drive that also netted Southern Power, The Anchor Shop, Austral and Veecraft.  “These were all brands and organisations I had been dealing with for 15 years – you tend to know everyone in the Cape Town marine industry,” says McVitty, whose versatility helped Nautic adapt in trying circumstances. “When the global industry was falling flat on its face in 2007/08, with record low oil price, we had to adapt. We went from producing aluminium patrol boats to producing composite ferries and moved into people transport.”

“That is really how the group is able to move and adjust to market demands. To survive in the boatbuiding industry you have to be that agile. You have to be agile enough to change and change quickly.”

In April 2018 McVitty moved across to Veecraft, first as chief operations officer and then CEO as from July last year.

Now a proud father of two, McVitty appears to be enjoying life in the deep end of an industry that for much of his early adulthood was only in his peripheral vision. If he flirted with boatbuilding in the first part of his career, he is now ball-and-chain married, with possibly more boatbuilding happening under his factory roof than anywhere else in South Africa. This much is clear when we exit our kitchen chat for a quick factory tour: first of a phalanx of 20m crew vessels for the oil and gas industry in West Africa; next a quick look at the navy’s new fleet of hydrographic vessels, two of which will operate off the main hydrographic ship currently under build by Sandock Austral Shipyard.

McVitty’s stride automatically quickens and his eyes alight as we duck beneath galvanised steel and between sleek hulls. One suspects he owes his meteoric rise of late to a skill-set whose time has come – the ability to get something done and not be an ass doing it.

In style he may be casual but not in substance. There is an analytical mind unpacking the blockchain of his life story, one scene at a time. He is markedly understated about a privileged upbringing (he went to Bishops) that mercifully does not define him beyond a faint accent of pleasure (it could also be the coffee kicking in).  His brand of down-to-earth leadership could be a much-needed social lubricant at a time of quick talking and slow spending, with government procurement spend retreating like Greenland glaciers.

McVitty is also turning his background in hospitality to good advantage in the form of improved customer relations as yards like Veecraft and Damen actively seek to push into new markets.  He concurs that this has been a valuable lesson: “I definitely think that the customer relationship is a lot stronger in the leisure market. The commercial environment tends to be business to business focus, and a lot of that personal attention gets lost.”

“That is one area where Nautic and Paramount definitely sets itself apart.”

We are back at the front door after a quick nip down to the water to jump aboard one of the new navy boats.  There is a nod in lieu of a handshake, a slight nod of the head; his mask seems to strain against another McVitty smile.  Then he turns and heads back into the boatbuilding future.