The new Voyage 590 Cat is on the water in Cape Town. 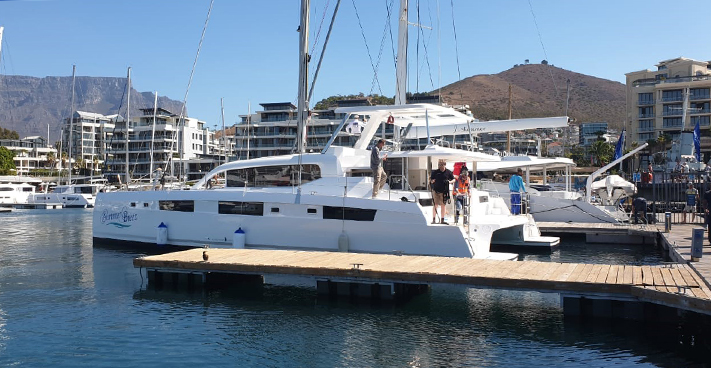 The long-awaited 590 model, which registered three sales even before the first deck was on, is a milestone build for the Cape Town yard and sister charter company Voyage Charters. The new boat is due to join the Voyage Charter fleet in the British Virgin Islands, with the company confident of many more to come.

“It has been a long journey from 2018 to now,” Voyage chief operating officer Kay Oldenburg told SABBEX. “It is an absolute relief to see it in the water. We went out sailing today for the first time, sea trials with the owner on board, and it all went so smooth. It was a great outing.”

Oldenburg said the 590 was the first vessel ‘developed from scratch’: “Except for a power boat we built six years ago, all the others we either took over from another builder, revamped, or modified. This was the first sailing boat to come out from the drawing board all the way to the first launch.”

The 25-year-old yard also recently launched its first electric hybrid, the Voyage 480 hybrid, amidst growing demand for hybrid models. Oldenburg said he was confident the new 590 would also appeal to the marketplace. Said Oldenburg: “It is still early days but we hope to make an impact. The design, the interior, is very progressive, and that should appeal to a lot of charter guests and the sailing community.”

“We hope that it will give Voyage a niche in the market.”