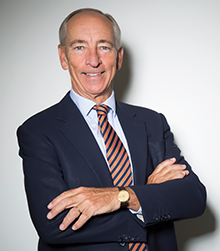 The politics and the feisty personalities: riding out the storms of the international commodities market was good training for the realities of South African sports administration, says Baum with a smile.

In fact the affable 65-year-old former chief executive of Anglo American’s Ferrous Metals Division and EXCO member is full of praise for the sport and its enthusiasts. With a calm hand on the tiller he has helped steer the sport away from the doldrums towards a sustainable future. This he has done despite inclement weather.

Baum insists whatever his successes while in charge of SA Sailing – his term came to an end in August last year – they were achieved with the help of a like-minded majority of dedicated and forward-thinking people.  “I feel it is important to celebrate the good people in the sailing community I’ve had the pleasure of working with, and who make things possible,” he says of all involved in running the sport from clubs to classes to the SA Sailing volunteers and professionals. “Hugely inspirational are those running successful sailing academies such as Sail Africa, the Royal Cape Sailing Academy and the Zeekoeivlei Sailing School,” adds Baum.

From the outset a key mandate was to move the organisation into a more professional era which, he believes, remains essential to the sport’s growth and indeed its survival.

To this end it appears to be a case of mission well started.

Almost inevitably the former top business executive’s term atop SA Sailing was also about injecting a more businesslike approach to sailing, particularly in the context of fast-growing rival sports competing for scarce development resources. “Growing the base of sailing is hugely important,” he explains. “Our membership has increased 30 per cent” “Essentially what we need to do, from a business model perspective, is grow membership to 10 000 members, at which level we can afford an integrated full time executive team who could engage a wider community,” he says.

Baum is quick to point out that professionalising sailing is a shared vision that came out of a vital strategy session led by ‘scenario planner’ expert Clem Sunter. “Collectively SA Sailing came up with a pyramid structure of five key strategic goals. At the base of the pyramid was to professionalise the management of sailing in South Africa.”

Other layers of the pyramid are: Access to Water – “a huge threat to the sport”; growing participation; Transformation; and Pinnacle Achievement such as Olympic success. Baum says symbiotic collaboration with the boat building industry is another significant opportunity.

Looking back six years later Baum is confident the organisation has made considerable strides. SA Sailing now has a new management structure consisting of regional representatives who are active decision makers at the ‘top table’ of the National Council. “It makes for more efficient decision-making,” explains Baum.

He also oversaw the redrafting of the SA Sailing Constitution to make it “fit for modern-day SA purposes”.

Another notable achievement is the introduction of a new SA Sailing Sports Management digital platform developed by Australian Sailing to service its 85,000 members and clubs. The move will significantly reduce administrative duplication and workload generally and offers options to the boating industry at large (more on this another time).

There has also been progress in dealing with various water access issues, such as in the Langebaan lagoon, Mossel Bay and Vaal Dam. Baum says the high-profile skirmishes between Transnet and some of the coastal clubs underscores the need to seek solutions, rather than grumble about problems: “We need to think about ourselves and decide how we want to be remembered. My challenge to the next generation is to be people who can see the solution, who can help something get better.”

Baum is not all business. His involvement with sailing is a lifetime addiction, starting at age 10. However he said his segue into sailing administration was motivated largely by an appreciation for what the sport could mean to South Africa. “What captured my imagination was the possibilities that sailing offered South Africans. At the height of the Zuma problems some of us took the view that a previous generation of political leadership had given all South Africans an opportunity to do things together and we did not need anyone’s permission to join hands and get on building a different country”.

He remains a World Sailing Councillor and a member of it’s Events Committee, which coordinates sailing participation in the Olympic Games, and the Governance Commission. Says Baum: “This body is proposing new ways for the 145 member countries to interact with each other and make decisions about their sport globally.”