Knysna is more than just a pretty face 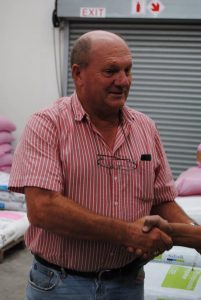 Robbie Bevan’s desk is a jigsaw puzzle of mysterious bits and pieces.  If you fitted them all together you might get an aircraft carrier, or a fire engine. That’s how much stuff is piled up there under his nose as he studies me with a precision stare.

I too am staring — not at him but at his gizmos. His landline telephone is suspended in some kind of easy-access contraption. So too are his ballpoint pens. Directly below them are small ponds of miscellaneous clutter, some plastic and others metal, that presumably all have their place in the world of BG Boat Parts and Bev-Tent Components.

A wizard’s hat would not look out of place atop Bevan’s balding head as he sits amid his mysterious gadgets and contraptions.

An engineering maestro he may be but Bevan is no expert on the media. His furrowed brow and troubled expression suggest he is as flummoxed by my presence as I am by his paraphernalia, and I suspect he would much rather spend some time with a number four shifting spanner than with a journalist. 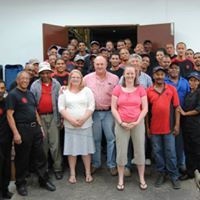 But here I am anyway and he is kind enough to offer me a yard tour of his Knysna facility.

From his elevated office we descend a flight of stairs into the bowels of the BG factory, which is split into two connected sections. There’s also a separate storage room alongside and despatch office upstairs.

As I start the guided tour I have two first impressions: 1) the space is a mechanical marvel, with more clanking chunks of metal than a munitions factory; 2) Bevan is a mechanical marvel, with a wealth of knowledge that is difficult to quantify. He speaks a gruff, arcane language of screws, rivets, and blades that often involves little more than a few hand gestures with his staff who are similarly inclined. That’s not to say there is no factory banter; on the contrary Bevan is quick to dispense a joke and is visibly  more relaxed the closer he gets to a CNC or injection moulding machine. One suspects Bevan is more a man of action rather than words, which partly explains how he has managed to sustain a manufacturing business at a time when so many have fallen by the wayside. “A lot of factory space has become available around here,” he confirms in response to my questions about the recent economic downturn. “A couple of years ago you couldn’t get any factory space here.” He ponders the state of things for a brief moment. “But personally I believe it is going to improve – I believe it has already,” he concludes sternly. 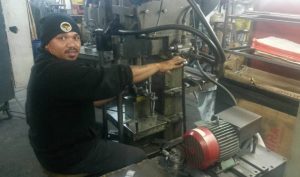 BG itself has grown significantly since its birth over 50 years ago on a farm outside Johannesburg, founded by Robbie’s father, Bernard Bevan, who himself designed some of the machines still operating today – Robbie proudly points them out as we walk past. “My father built them as well. They’ve been operating since I was about seven-years-old. Bevan Senior moved both his family and the business to Knysna in 1977. Under Robbie’s leadership it has diversified and now produces a much wider range of products, everything from boat cleats to plastic tent fittings. Parts are locally produced, most often locally designed too, entirely from local materials. Bevan even designs the tooling himself if required, something he evidently enjoys judging by the way he caresses a block of metal as we pass by. Next we visit a row of fly presses, a guillotine press, then a CNC milling machine squirting purple goo inside. 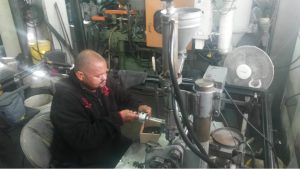 To the untrained eye it all looks a bit like voodoo magic.

It is time to go and I quiz Bevan about his future plans.  A lot depends on the market, he says, although product innovation remains key whichever way it goes. Already the expansion into caravanning and tenting is explained partly by the recent contraction in the local boat building sector; the factory employs up to 50 people and the boating market is just not big enough to fill up the order books.

I depart BG with a sense of frustration shared by the vast majority of local manufacturers. A facility with 13 moulding machines and a fully equipped metal processing section, nestled in one of the country’s boat building hubs; with a little more market support Bevan and his staff could be supplying all corners of the world with locally patented goods.

Then again don’t feel too sorry for them because it might still happen.