The Smiles are Back at DAMEN – and the Noise and Dust too.

It has been a long time in coming but there’s finally serious noise bursting out of Damen’s Cape Town shipyard where the workforce is swelling again thanks to Project Biro. 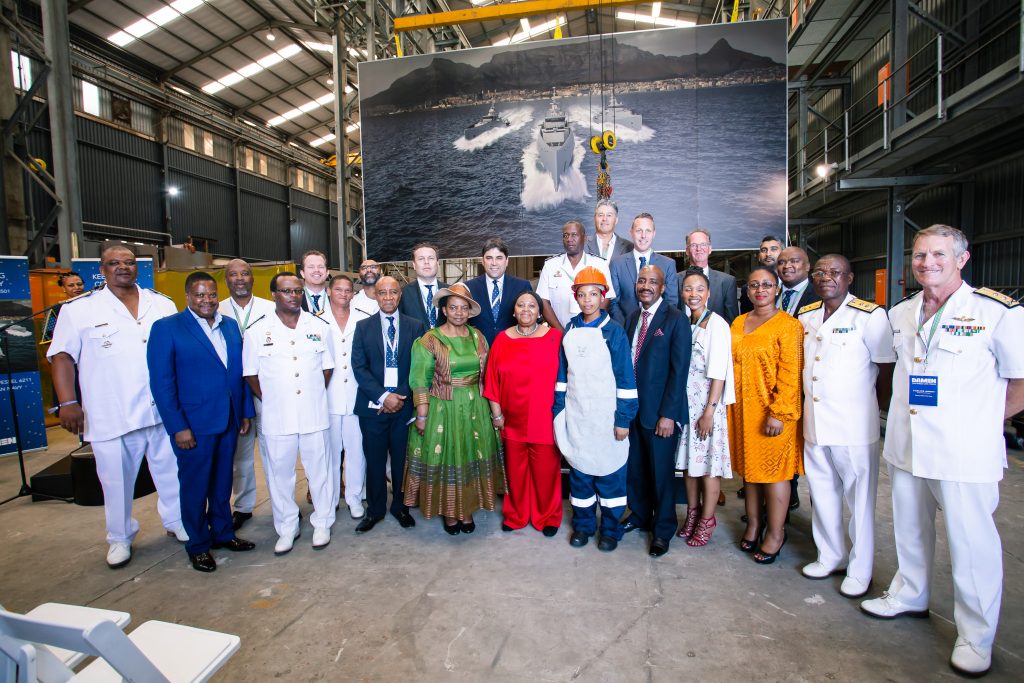 The military procurement package — three inshore patrol vessels — with the first due at the beginning of 2021 – is a lifeline for the local ship building sector, with all the major players set to benefit along with their suppliers.  Lengthy delays in finalising the procurement package, made up of Projects Biro and Hotel, had cast a long shadow over once bustling workshops that have endured a jobs bloodbath in recent years. 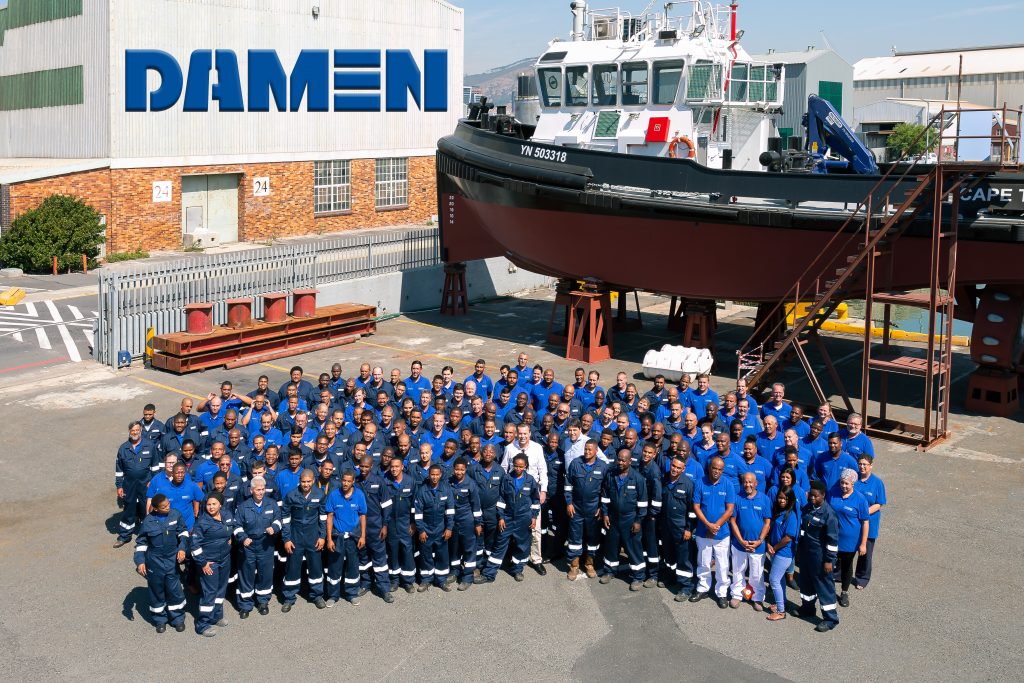 But the good news is the jobs are returning, along with new training opportunities for the local workforce. A visit to Damen’s Cape Town head office revealed a revitalised senior management who talked to SABBEX about their progress both inside and outside the yard.  “So far we have reached every milestone,” said MD Jaap de Lange of Project Biro. “We are right on track, also with budget.”

He said the company was encouraged by the enthusiasm of their state partners, particularly the navy, with senior officers keeping a close eye on the build.  Monthly progress meetings and yard inspections keep key stakeholders up to date. 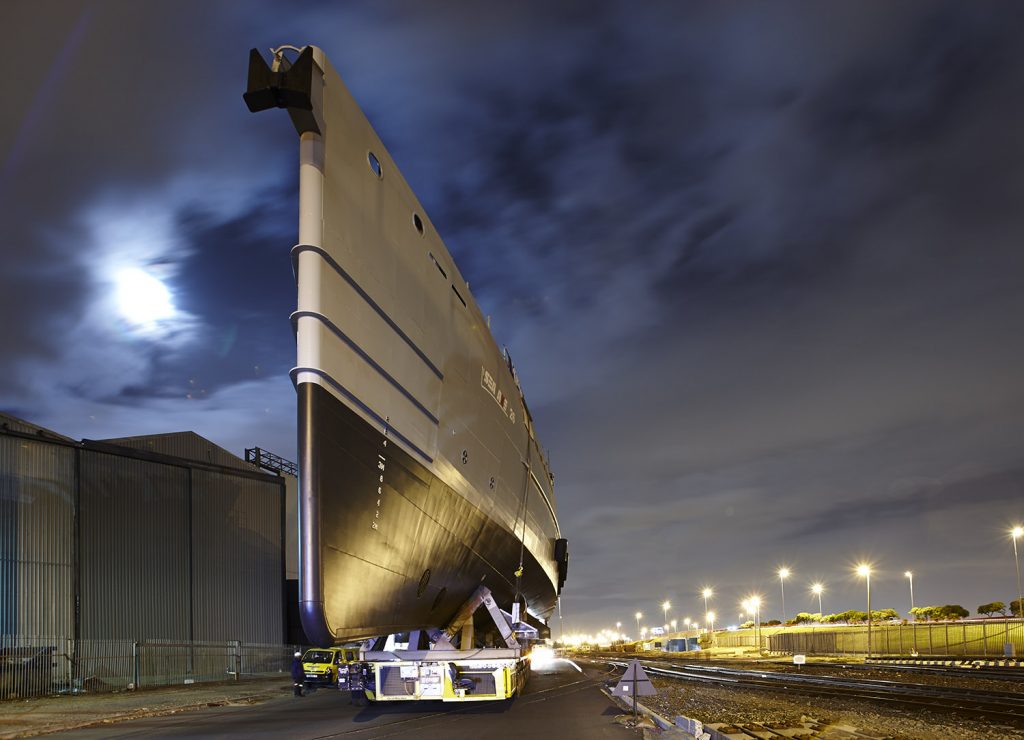 Technical director Ronald Rietveld said the current workforce of around 170 would ramp up to about 250 by the end of the year, which is good news for local contractors. He said there was also a positive knock on effect for local suppliers due to the company’s contractual obligations to source local content. Although electrical engineering for Biro was completed by Damen engineers around the world, all electrical components would be locally sourced and installed by local contractors, with the help of engineering support.  The company did not expect too many modifications of the kind that could delay project timelines, Rietveld said. 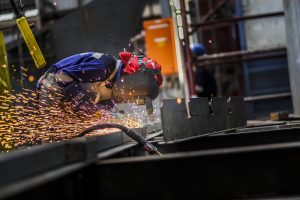 The company was also forging ahead with its training and transformation agenda, according to De Lange. On the training front they had recently appointed 13 interns linked to government’s ‘YES’ youth development programme launched by President Cyril Ramaphosa: “It gives young people the opportunity to work a year in the company and gain experience,” De Lange said, adding that the company would most likely absorb a few of the interns, while the others would be well placed to work elsewhere in the sector.

The company’s training school, launched seven years ago, had certified over 100 apprentices, of which 21 were female, De Lange said. 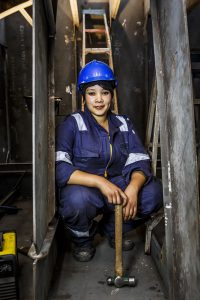 There is also progress on the empowerment front, with five BEE companies selected based on black ownership and expertise. Damen was currently finalising a deal with a local company to deliver piping, which entails providing a loan for the necessary bending machine. “That is all part of how we try to develop companies to where we believe they will be in a position to survive after our project,” De Lange said.

In the medium-to-long term the company hopes to use the Biro project as a showcase and a springboard for similar projects, particularly in Africa with its large potential market.  Said De Lange, “It could be an export opportunity for South Africa. If we have built three of them then we have the experience.”

He said the vessels were better suited to local needs and conditions than the navy’s frigates: “This size of (inshore patrol) vessel, with this functionality, is very good. They have multi-purpose options, like for diving assistance or mining operations. On the aft deck you can have different containerised configurations that can really support big operations and exercises.”

In summary the yard is a happy place compared with a few years ago, De Lange said: “Now if you go into the production area you will notice it – a lot of noise, flames and dust. It is really a shipyard (again)!”

“There are smiles on faces,” he said, smiling.