And a modified power cat is almost done too… 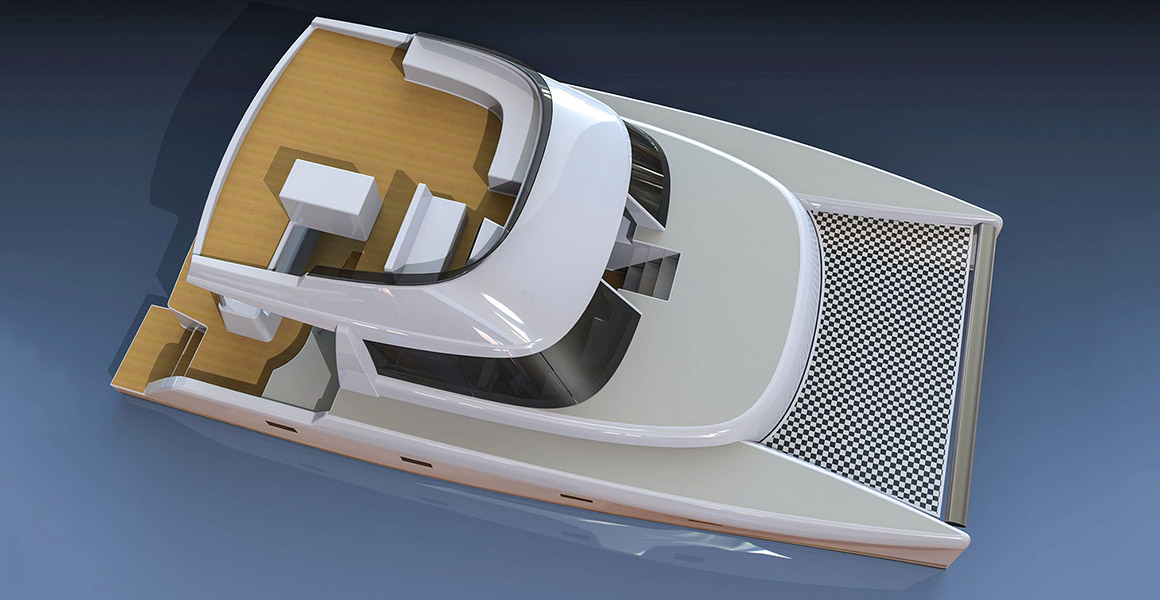 Kevin Knight is not one to answer his cell phone during an interview, but this one is important: it’s his five year old son, something to do with homework.

That much is evident too from the bustling scene unfolding us when we tour his yard: two large catamarans nearing completion, each a hive of activity with workmen scattered on top and burrowing inside. On one side is a modified Scape 42, designed as a live-aboard power cat but capable of day charter operation; on the other side is a brand new design, the Scape Sport 40, which looks sleek enough to sail through outer space, with bright orange hulls and angled flat top roof flanges straight out of Star Trek. 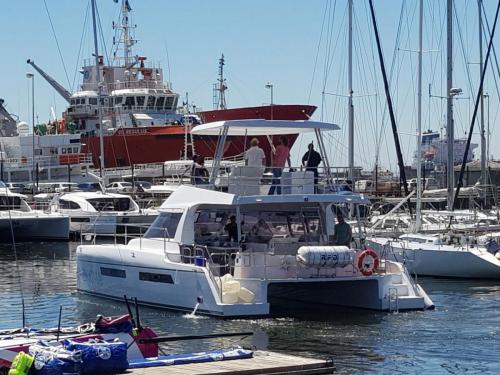 As if that isn’t challenging enough, Knight walks me past a round capsule that would seriously look more at home orbiting the earth – a carbon fibre retail ‘pod’ destined for duty at the V&A Waterfront, one of 32 to be hatched in the Scape yard outside Somerset West. Knight taps the double-glaze window with pride. “Trial and error,”  he says, “the first one leaked like a sieve. Not anymore.”

Typical builder – most happy when something sticks.

But it’s the two boats that take centre stage in Knight’s imagination these days from the sounds of it. He is making a push into the mainstream leisure market, aiming beyond day charter at a time when buyers are increasingly looking for power cats. “This kind of power cat is becoming more popular,” he says. “We have predominantly done day charter but the idea was to try and break into mainstream sailing boats.”

“Obviously our big challenge with commercial boats was never having the American market.”

Hopefully this will soon change, with a trip to next year’s Miami Show possibly on the cards.

Not without a certain amount of trepidation is Knight’s latest market venture, it has to be said, judging by his nervous energy. On the other hand one suspects a few risks is nothing new to a guy who is also not afraid to say what he thinks, whether it be about epoxy or single parenting – he looks after two boys.

Of the two current builds (three if you include the mystery hull almost blocking one entrance – soon to be connected to its twin) it is difficult to know which is Knight’s favourite, although the epoxy Sport Scape is possibly more unexpected.  Regarding design he has this to say: “Simonis-Voogd  platform with some flare from Anton du Toit… and input from owners and builders.”

“I don’t think we could get much more modern.” 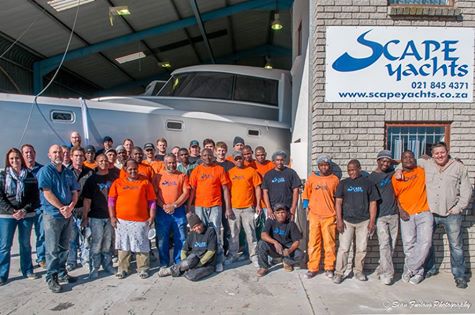 “In boating you have to update your range every four or five years otherwise your boats do look old.”

The racing design also aims to add more than a little extra zip under sail, which will appeal to the more serious sailors. Not for first-timers, in other words, nor for recently retired hedge funders who only want a tour of BVI cocktail bars.  “If you are not a sailor then this boat is not for you — then you must go and get a caravan,” is Knight’s considered opinion. “You have to be a sailor for this boat — that is the type of person I am attracting.”

One such person is Brad Rayson, KwaZulu-Natal hotelier and owner of the inaugural Scape Sport, who was already a fan of the relatively speedy Scape 39. Rayson had also spotted and coveted a hybrid open deck variety owned by local sailor and boatbuilder Greg Davis, which served as the starting point for a new design project in the Somerset West yard. The idea was to modify the existing design to create an even sportier Scape without skimping on too many of the comforts. Says Rayson: “These guys having got the mould, and being able to convert it over to what we wanted, it was a perfect start to do what we wanted to do. I approached the guys and explained what I wanted – an open deck boat but with two pods on both side.”

The result is a break from the traditional four cabin format that allows for a lighter boat, coming in at under five tons.

“We took it to Anton du Toit who did a bit of tweaking on the hulls, and then we slowly started building, tweaking more as we went along. It is a whole paradigm shift for cats,” Rayson says. “The whole top has been changed, the freeboard has changed, made higher, but the bones of the boat are the Scape 39, now a 40 footer.”

Rayson believes the boat has the potential to streak ahead of the pack in its class: “It might not appeal totally to a novice sailor, not until you know what sailing is about.”

“It will be super quick but also a cruiser,” he adds.

Knight concurs, and is looking forward to the launch in around three weeks time. “I don’t know how the market will receive it – I’m as nervous as anybody,” he beams.

However the bustling optimism wafting through the Scape yard suggests on this one Knight, unlike his son, has done his homework.

2019-05-09
Previous Post: Watch: Broadening Horizons & Bridging the Skills Gap
Next Post: The Smiles are Back at DAMEN – and the Noise and Dust too.