Lars Erik Granholm passed away on April 5th, 2016 at the age of 81. He leaves behind his wife Leena, children, and grandchildren. 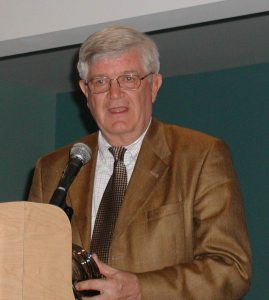 Lars, born in Finland in 1934, immigrated in 1961 to the USA where he joined the Outboard Marine Corporation (OMC). From 1974 to 1981 he authored small boat regulations while serving as the project manager for standards development with the U.S. Coast Guard. In 1981 he then joined the Chicago-based National Marine Manufacturers Association (NMMA), establishing the NMMA Certification programs. He proposed at that time to the NMMA Board and several EU marine industry associations to found together a globally working organisation to CE-certify recreational craft, their components and engines for and in the EU.

This organization went on the become the “International Marine Certification Institute” (IMCI). IMCI was registered as an international non-profit organisation in June 1993, and still based in Brussels, Belgium. Today IMCI is the market leader in CE certification in the global boating industry. When Lars Granholm retired as the IMCI Managing Director he was ap-pointed Chairman of the Board until end of 2004.

That year he received the prestigious NMMA Charles F. Chapman Award for his lifetime achievements in the marine industry. The award recognizes individuals or groups that have provided consistent promotion and protection of the sport of boating, resulting in benefits to both the industry and the public.

“Lars was the best teacher and mentor to me. He made IMCI more than 20 years ago and we still stick to most of his philosophies. I wish Leena and the Granholm family all the strength they will need in a future without him” says IMCI managing director Ulrich (Uli) Heinemann. He was Lars Granholm’s successor in 1999 and still maintains the position.

Lars wanted to be buried in Finland.