Sailors will be familiar with flying fish, but not the kind that had to be airlifted out of the Robinson Dry Dock on June 9. 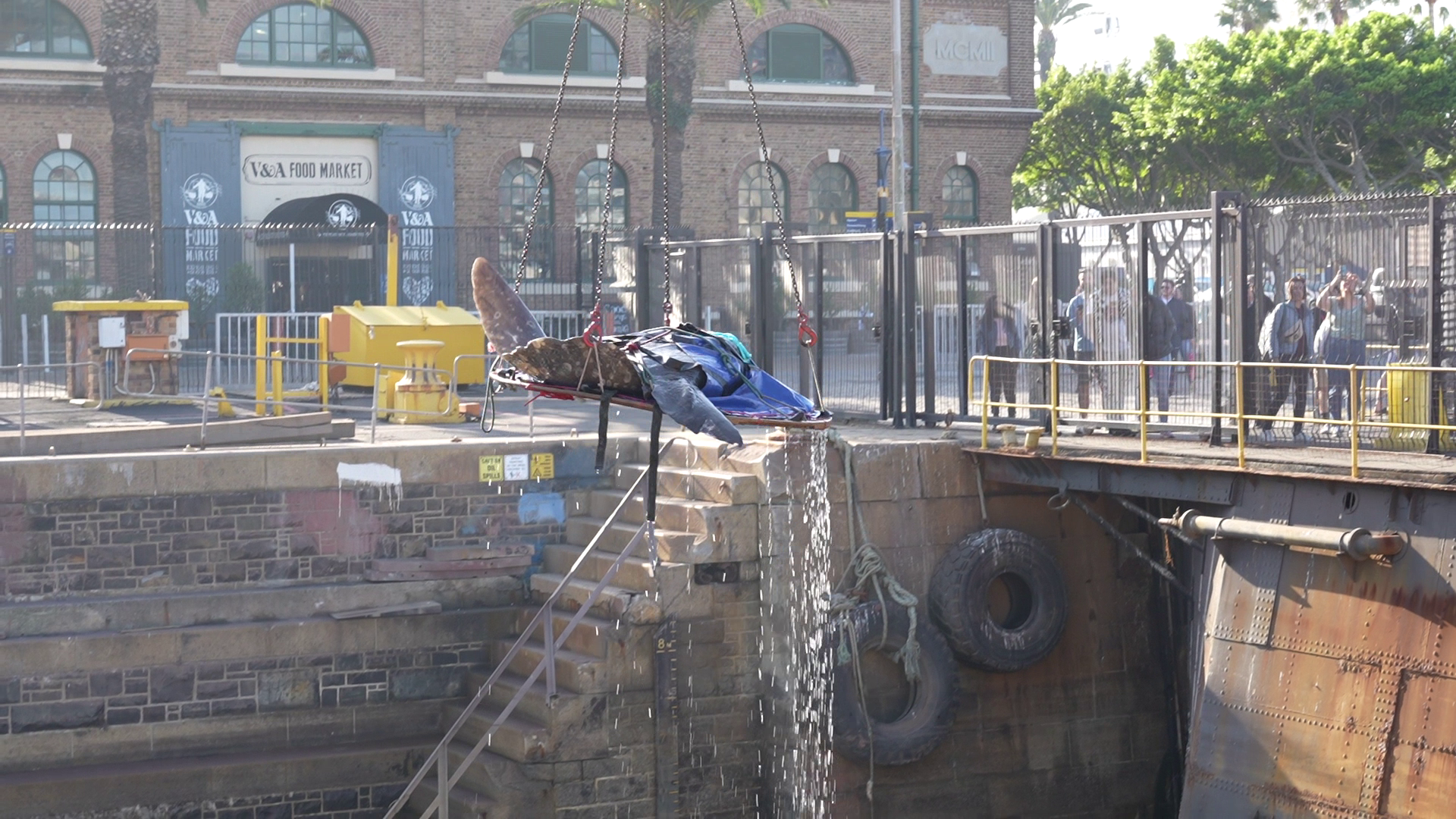 A large sunfish had become trapped in the facility, prompting an emergency crane rescue effort as the Dry Dock water drained away.

“The distressed sunfish was quite weak, so it was fairly easy to flip it on its side to load it on to the stretcher,” said Two Oceans Aquarium research assistant Chateau-Cyster said in a statement released last week. “Once it was safely secured on the stretcher, we swam it across to the steps of the dry dock where we collected biological measurements,” Chateau-Cyster said. 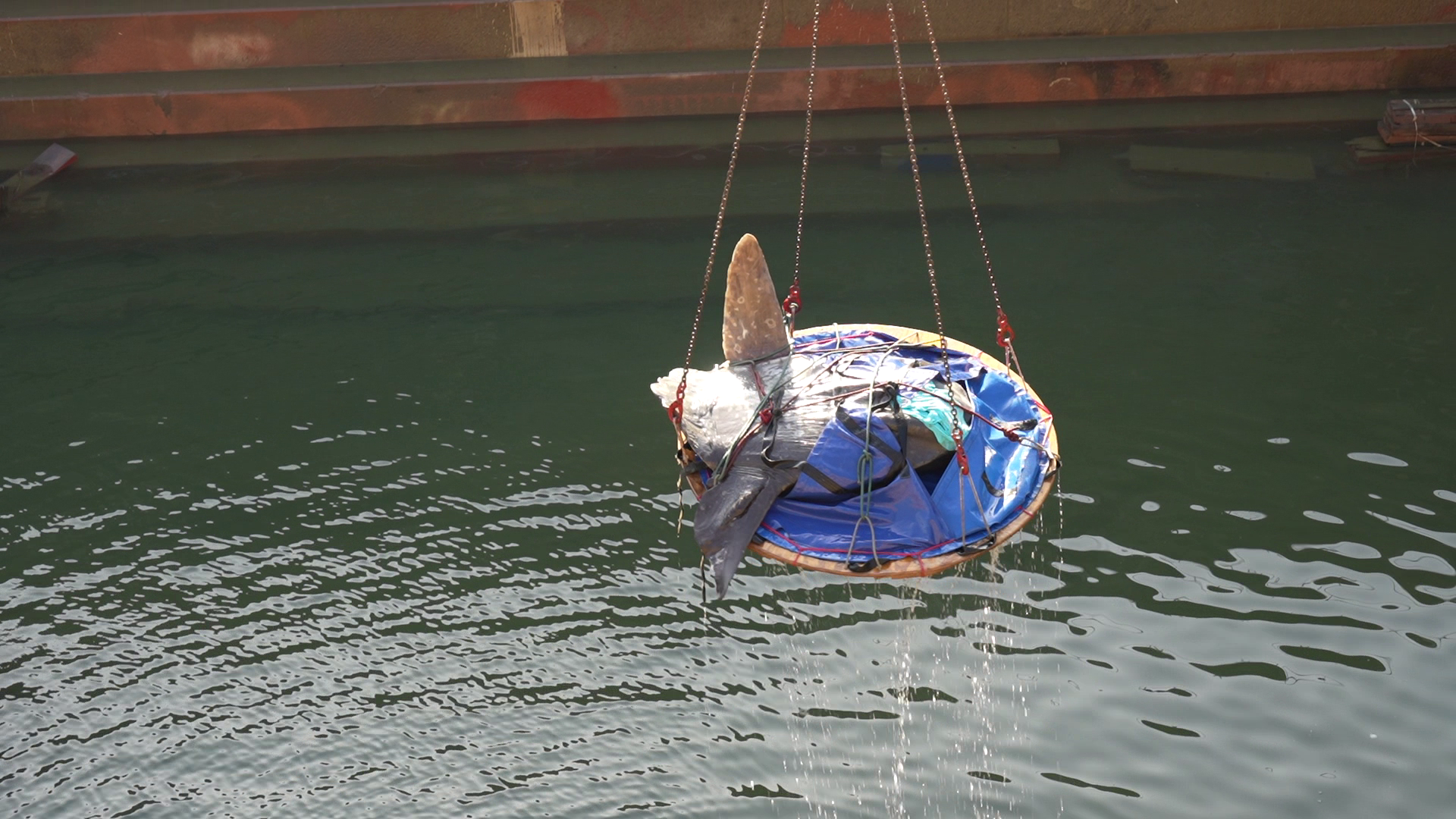 The sunfish weighed in at 760kg (together with the stretcher) and measured 189cm.  It was hoisted onto a boat and kept moist during the ride out of the harbour. ““During the boat ride we scooped buckets of water to pour onto the mouth of the sunfish and monitored its breathing. Once we were safely out of the harbour we jumped into the water and released the sunfish. We held on to it for a few minutes to check its breathing. Once it regained strength we all let go and it swam off strongly,” said Chateau-Cyster.

Sunfish rescues and strandings are not uncommon around Cape Town, particularly in summer at the Waterfront and Simonstown. The fish are often injured or disorientated, and sometimes require attention, the Two Oceans Aquarium said in their statement. The two species generally round are the ocean sunfish (Mola mola) and Sharptail sunfish (Masturus lanceloatus).

“Ocean sunfishes are found in all the oceans of the world, excluding the icy polar seas,” the Aquarium said. “Sharptail sunfishes are found only in warmer waters, thus they are extremely rare in the local waters. The rare slender sunfish (Ranzania laevis) which has been seen washed up on Cape beaches is a tropical species and prefers temperate conditions. Only ocean sunfishes have been displayed in the Aquarium.”

“Sunfishes do not have tails as other fishes do – the caudal (tail) fin has been replaced by a rudder-like structure.  The ocean sunfish has a rounded, wavy rudder. The sharptail’s rudder, as the name suggests, has a distinct point.”

“All sunfishes have small mouths and the teeth are fused together in each jaw, forming a beak like that of a parrot.  The beak is internal and hidden from view. It is interesting to note that an animal that grows to such a large size feeds on jellies, which have very little nutritional value,” the statement said.

“Sunfishes are not considered edible as they consist mainly of cartilage and gristle and their flesh is soft and insipid.  Also, the skin is extremely rough, similar to sandpaper in texture. While they are therefore not targeted species, they are increasingly being caught as bycatch which is a threat to their populations.”

“Sunfishes are the largest bony fishes in the ocean.  They are considered to be one of the most advanced fishes because of their highly specialised body form. They are also the most fertile of all fishes, producing up to 300 million tiny eggs,” the Aquarium said.