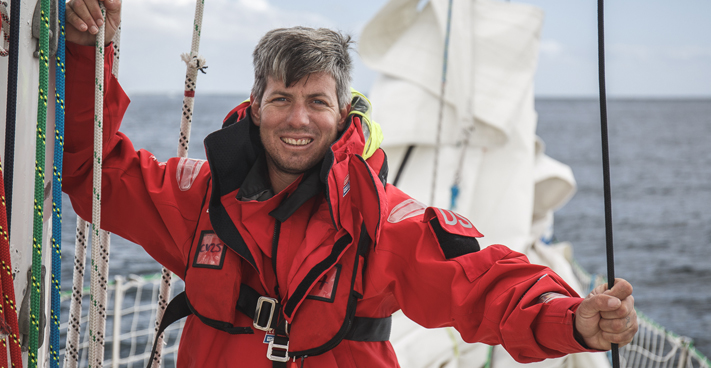 Dale Smyth is no fair weather sailor – and this is just as well. The logistical challenge he takes on with his new role at the helm of the Clipper Race is every bit as challenging as conditions on the race route around the world.

The well-known local sailor who moved to the UK last year to take up the deputy director post was back in his beloved Cape Town last month to welcome the Clipper fleet to his home ‘village’. He told SABBEX the past year had been an unexpected journey in more ways than one: “One thing we (the Race organising team) accept as normal is problem-solving – as a team it is what we do really well,” Dale said. “It has been a flat out year, and now we are on the road with the Race.”

As Race deputy director Dale has multiple roles, notably managing the allocation of crew to teams and assisting the Race director with the overall planning of the next race route. In this he is ably assisted by a huge team that is split into smaller groups, each one responsible for various work tasks such as maintenance or communications. Dale himself is only too happy to delegate so that he can get on with his core function – the operational side of the sailing fleet. “We run the sailing side of the event,” he explains. “We set up the course and all the operational side of stopovers. We kind of make sure that the fleet is in good order, and that we have the right skippers and the right mates.”

For Dale the race remains true to the original ethos espoused by founder Sir Robin Knox-Johnston, whose sailing books were largely influential in Dale taking up the sport as a young boy.  30-odd years later and Dale is now living the life he once could only dream about, and he hopes the Race will inspire future generations of sailors: “That is what our passion is – not just racing around the world as professionals, but taking ordinary people and racing around the world with them,” Dale says.