NEWSFLASH: Industry legend GREG BENNETT says he plans to slow down a little bit during retirement 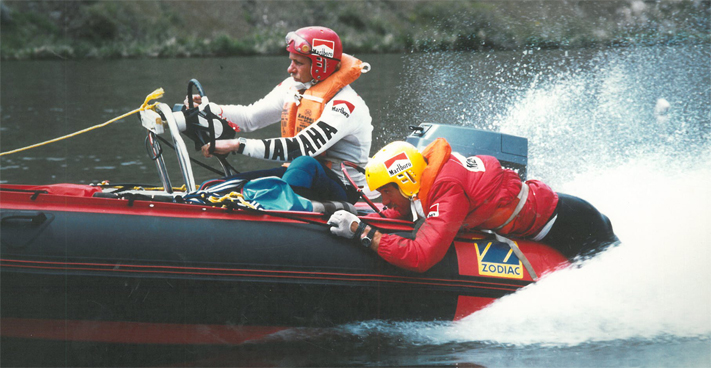 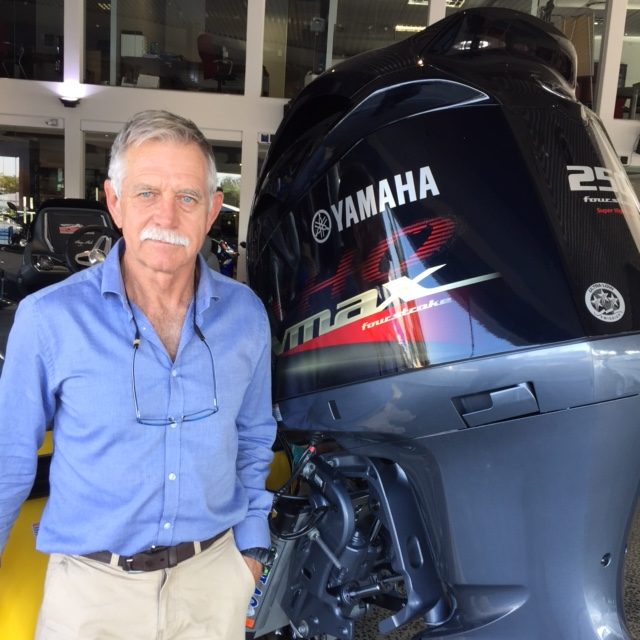 Greg Bennett skeefs me with a pair of twin prop blue eyes: “An interview tomorrow?” His twin props drill a hole through my skull, then throttle back. “Fine. Just not at 12.15.”

Greg is remembering tomorrow’s rugby match, Springboks vs Japan, starting at 12.15pm.  He’s fine to do an interview but won’t be held responsible for what could happen should it disrupt the World Cup quarterfinal. Am I mad?

We are at the Cape Town International Boat Show, Yamaha exhibition, standing on the floating marina boardwalk next to a family of basking seals. Word on the quay is that Greg is retiring after 38 years in the Yamaha game, and I’d like to ask him a bit about that. What was it like? What will he do next?

And yes I’ll come early tomorrow, obviously, so that I have enough time to get his whole story before the match.

I arrive late. 40 minutes to kick-off and Greg’s blue twin props are already half way to Tokyo as he ushers me onto a 15ft pontoon moored opposite the exhibition stand. Almost four decades in the maritime retail game and he must now sum it all up for somebody who thinks a twin stroke is something that ends with a respirator in hospital. I have a little over half an hour to get his whole life story, finish and klaar.

Not that Greg looks at all finished with his trademark snor still perfectly place and his wiry frame still nipping around faster than most of his much younger colleagues.  And it is testimony to his evergreen customer relations charm that, even though I can tell he would much rather be holding up tackle bags for Tendai ‘Beast’ Mtawarira, he indulges my request for him to talk a bit about his personal life. 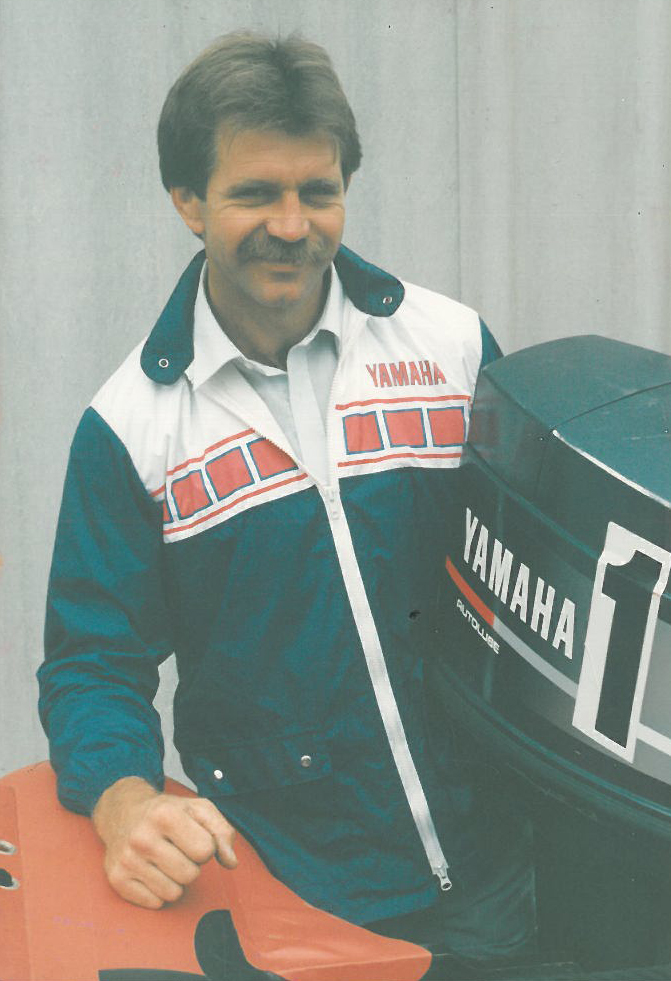 If I were him I would have pitched me overboard by now and be trotting back over to the beers.

Actually as it turns out rugby is a good metaphor for Greg’s career. Passion, commitment, discipline, hard knocks, a bit of luck, and the ability to keep the scoreboard ticking over.

It all started on a farm near Bergville in the Drakensberg, where Greg’s love of the outdoors was tainted with financial hardship: “It was a typical sad story,” recalls Greg. “My father sold the farm and got a job as a tractor salesman. We moved around a lot.”  To be exact Greg moved house 14 times during his school career, he and his three siblings, always in KwaZulu-Natal and mostly in the midlands where he eventually ending up at Alexander High School in Pietermaritzburg. His father died when he was 17, which placed a heavy burden on Greg’s mother. “Mom went back to work as a nur

sing sister and, with her long hours and living on a farm 15km out of town, there was no way to fetch and carry (us) to school and sport,” Greg recalls. “So she bought a second hand Honda 50cc for R28 00 –it was a lot of money for her –she had to pay it off over three months.”

But his attraction to sport and engines started even before that, no doubt partly inspired by his rural upbringing where his dad used to fix the neighbours cars and tractors. Bennett Jnr followed in his father’s tyre tracks: “I always had a motorcycle after dad bought us a scrapped old Triumph that we rode the hell out of on the farm and had to fix every week,” he says wistfully. “When I started working I bought myself a new one, and started racing.” 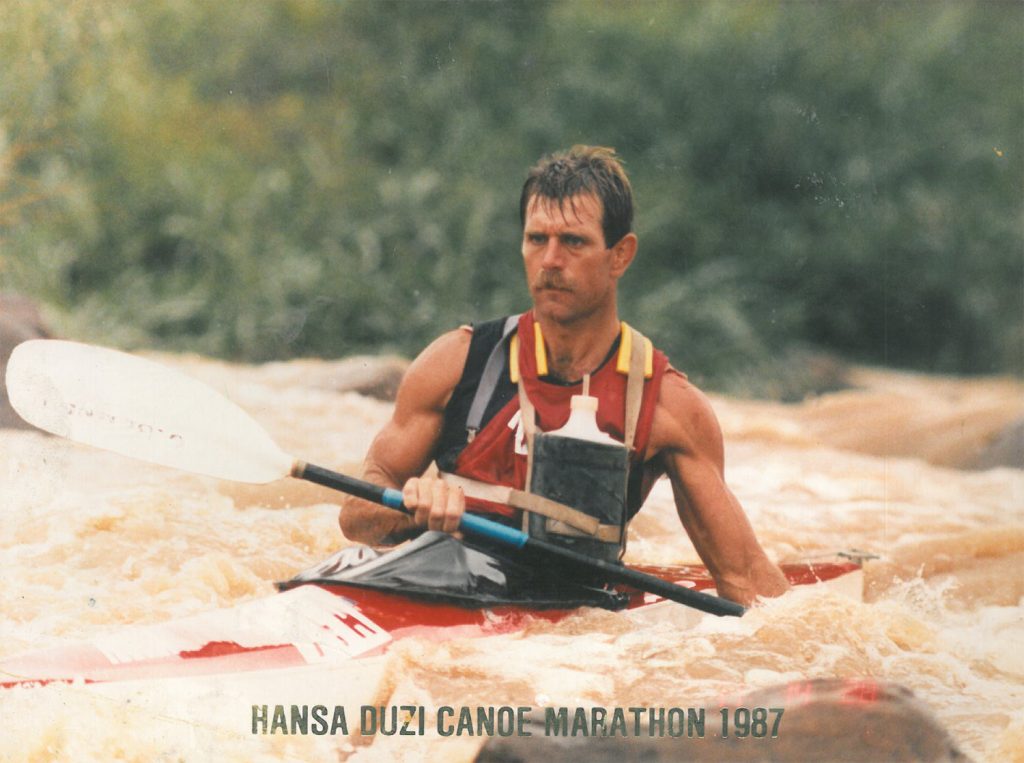 “I used to visit the motorcycle store (in Pietermaritzburg) almost every day, and one day in 1976 the owner offered me a job as a motorcycle salesman.”

In other words Greg’s outdoorsy lifestyle landed him his first job, and put him on a dream career path: he could now gawk at motorcycles and get paid for it.

It was a time of peak fitness for Greg, who not only co-founded an endure riding club but also distinguished himself on the rugby field for the first division Collegians side and joined the Duzi canoe marathon craze – he went on to complete 24 Duzis over the next 30-odd years.

And it was another sporting love, waterskiing, that earned Greg his first promotion: “Because I was the only one who could water ski, by default I became the outboard motor salesman – and I really enjoyed that side of it,” says Greg of his marine sector debut.

If the first phase of his career was serendipitous, the next was largely his own endeavour. He telephoned the general manager of the Yamaha marine division in Durban to enquire about a job. It worked – Greg ended up as assistant to Clarrie McGregor who would become his long-time mentor and close friend. “At my induction speech I was told “you’re in the marine business now and so forget about motorcycles ,don’t ride them or talk about them.” 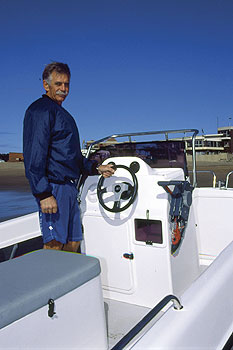 That was 1981.  Greg took over the reigns as GM when McGregor retired, although they continued to work together on projects until McGregor died a couple years later.  For the second time Greg had lost a father figure: “I gave the eulogy at his funeral,” remembers Greg.  “Part of my speech was that for me it was difficult to discern where my father stopped and my boss started.”

Greg’s first major task was to oversee the company’s integration into the McCarthy retail business, which bought out the company sometime in the early 80s. The goal was to enlarge the  retail dealer network to around 90 dealers and this resulted in steady growth, with annual sales of around 6000 engines (the current annual figure is around 2500). “Everything was done manually – we didn’t have a computer,” says Greg, who insists some ‘old school’ practices made life a lot simpler: “McCarthy’s moved us into an office on the corners of West and Point Road, one block away from the beach. We used to start work at 7.30am, take an hour for lunch when we would go down to the beach and surf, and then knock off at 4.30pm.” 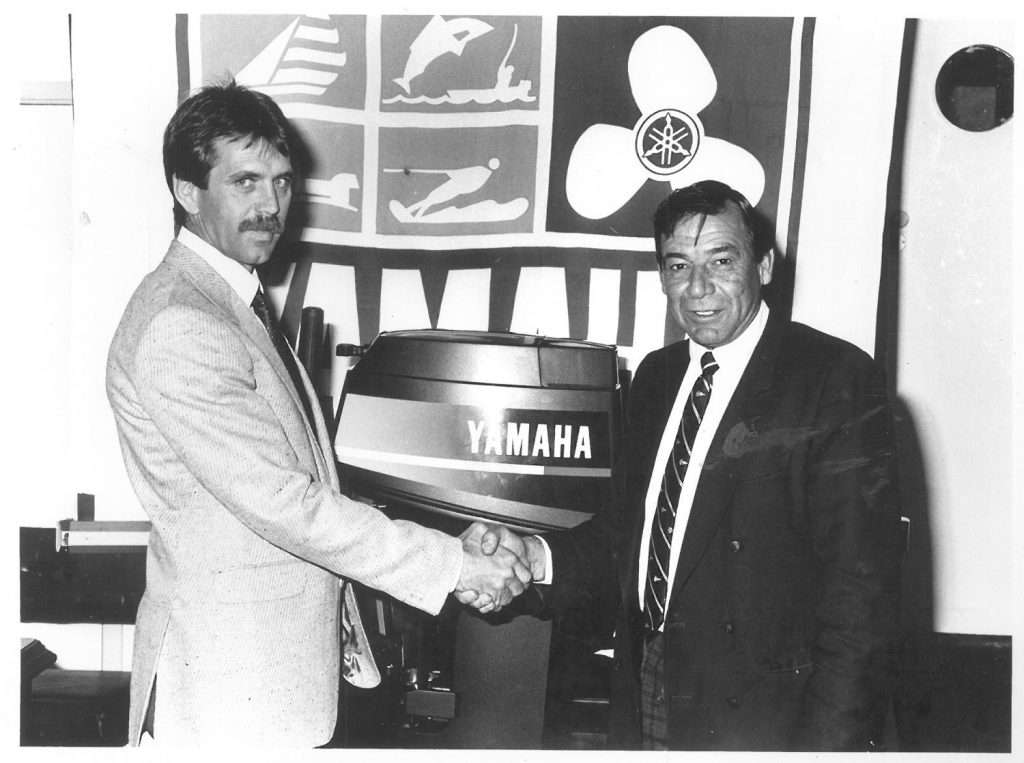 No such luck now in the computer era, mutters Greg, shaking his head: “Computers have just made our lives more complicated – everybody is constantly writing reports. In the old days there was so much information that management wanted to know but you couldn’t give it to them. Now it is instant gratification – finance divisions wants that information on an hourly basis.”

“The moral of that story is that computers have increased the amount of information out there, and increased the demand for that info.”

By contrast Greg still hankers after the days of bulletins in envelopes and dealers communicating via telex. “Everything was done manually. We would send a runner down to the warehouse with a note and they would get an engine ready for delivery. At the end of the evening our manager would phone the SA railways and they would send a trailer in the morning.  The engine would get sent to the dealer ten days later.”

It was also in the early 80s when Greg had his first trip to Japan, a country he greatly admires and has visited more than 30 times, no matter the embarrassing defeat they inflicted on the Boks at the last World Cup. At that time the exchange rate was 250 yen to the rand, which explains the huge sales figures relative to current levels. Explains Greg: “By virtue of the exchange rate engines were relatively cheap here in comparison to a working man’s salary. Working with the Japanese people and experiencing their hospitality and attention to detail has been very special”.

There was a lot more to life than selling outboards, however. Greg married (in 1986) and had three sons. He also started racing inflatable boats and was intimately involved in pioneering the sport in South Africa, which in turn fed into an inflatable boom time that gained further impetus when South Africans started visiting Mozambique in droves. “More than 60% of (engine) sales were for inflatables, and the top selling motor was a 50hp – because it went on an inflatable,” he chuckles. 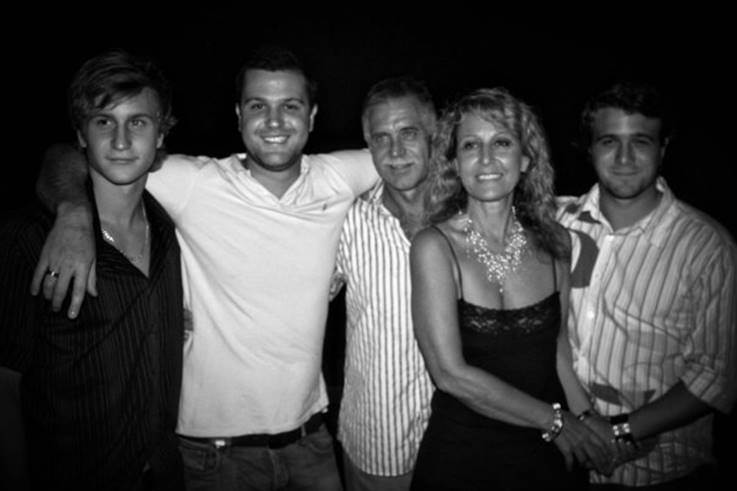 Greg’s powerboat racing came to an abrupt end in 1987 when during the second to last event in the  SA National champs in East London he fell out of the boat in a tussle to round the first bouy and was run over by the next four boats. He suffered propeller inflicted serious injuries to both arms and broke all his ribs on the left hand side which in turn punctured his lungs .He went into cardiac arrest as they wheeled him into Frere hospital in East London, and the last his friends saw as they rushed him into casualty was the emergency staff using electric shock paddles to restart his heart.

Says Geg of the ordeal: “This successful procedure resulted in a two week confinement in intensive care on a respirator at the hospital where I had 24 long  hours a day to contemplate my priorities and a lifelong understanding that the most important things in life are your family and good health.

It didn’t stop him adventuring though: Whilst recuperating from many operations to rebuild his shattered arms he spent his weekend time fishing off a Yamaha waverunner — because it required only a thumb movement to propel forward.  A Yamaha man right down to his fingernails.

Greg was similarly unstoppable in the corporate realm where his achievements helped keep Yamaha ahead of the game. He personally appointed almost all of the Yamaha dealers in SA, Namibia , Botswana and Mozambique  “except the 3 who were there when I started and are still going after  40 years or so”. He also generated Yamaha distributors’ new strategy of selling full package boat and motor rigs to the dealer network working with the boat manufacturers to develop unique products for the market, such as the very successful Explorer range of general purpose powerboats and the much loved Seacat range of surf launched catamarans so popular in KZN.

In short, the man is synonymous with South African boating, which explains the steady stream of visitors to the Yamaha tent at the Boat Show. Everybody knows Greg.  One suspects the same is true in Plettenberg Bay where he intends spending more time at his holiday home, in semi-retirement.

We’re back in the present, just minutes to go until World Cup quarter-final kickoff, and we’re talking about Japan again – about their chances of another upset.  Greg is serious now, worried even, as his thoughts return to rugby. He says the game is growing fast in the Land of the Rising Sun. The Yamaha factory sponsors a Japanese rugby team which even won a domestic league a few years back, adds Greg as I finally relent and bring a premature end to the interview so that he can watch the teams run on to the field at Tokyo Stadium.

It occurs to me that if the Boks are even half as tough as Greg Bennett we may just win the World Cup. 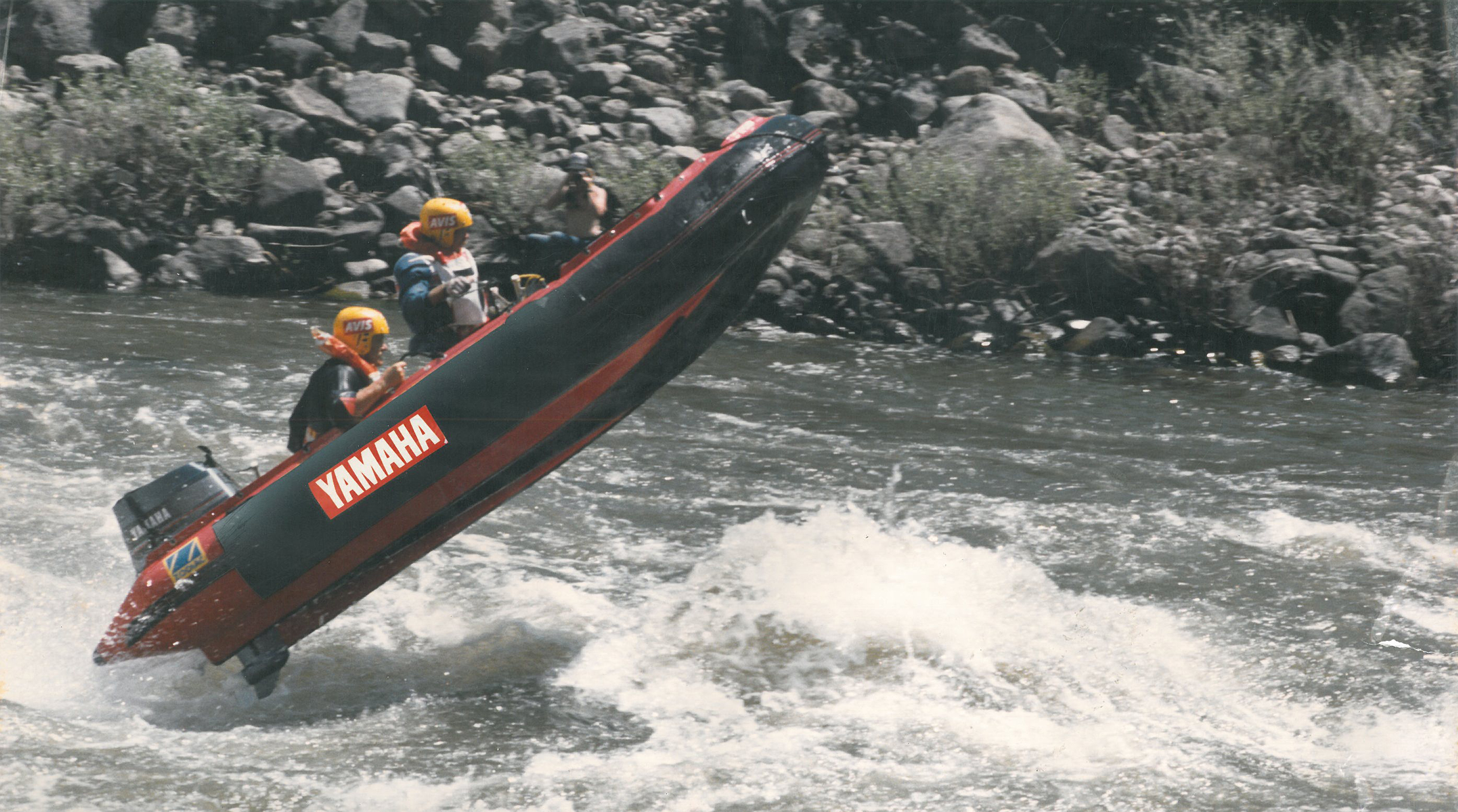