Meet the SABBEX ‘dream team’ who gave up suburban life in search of adventure – and found it on the high seas.

It doesn’t look unusual: three women sipping cappuccinos at a Hout Bay restaurant on a busy Friday morning.  But if you could count their collective sea miles you’d appreciate the slim chance of them converging around the same sugar bowl.

Vanessa Davidson, Simone Balman and Karen Oakley  have enough deep-ocean dinners between them to rival a cruise liner.  From Cape Town to Mallorca, St Helena to the BVI, they’ve racked up some serious buoyancy around the world together with their partners and families. But enough is enough.

The trio have now converged on the hard in the service of the South African Boat Builders Export Council, in one way or another, helping to build the new-look organisation that recently absorbed the Marine Industry Association of South Africa (MIASA). Add Bruce Tedder to the mix, another veteran sailor with a trans-Atlantic smile, and you have a kick-arse crew. 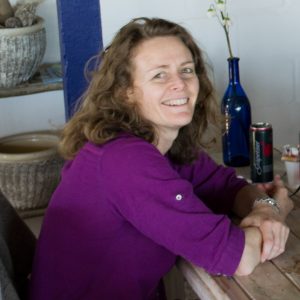 “We all went in different ways and did different things,” says Karen, whose early sailing experience was limited to the Midmar Dam. Fast forward a few years and she is drenched and wide-eyed on her maiden solo night watch in an Atlantic storm: “I remember that first night on watch with the wind blowing 30 knots, and I could hear the wind in the stays. I thought How am I going to do this?”

In different ways all three women were thrown in the deep end of ocean sailing, largely thanks to their partners. In Karen’s case her ex-husband worked on a stud farm, but fancied a mid-career break. The couple looked at sailing magazines and decided on a Roberts Mauritius 43. They had three boys – aged three, seven and nine – and a vague plan to get to the Caribbean.  “We sold everything to buy that boat. We spent three months kitting it out after sailing it around Langebaan. We had a year’s supply of food,” recalls Karen. “My youngest son didn’t get seasick but I was violently ill. I can still remember trying to cook him dinner that first night. I felt terrified.”

It didn’t help that the boat lost its steering two days out of St Helena, forcing them to steer by hand. “We used to heave to at 11 pm and just try to sleep. The boys helped during the day.”

Adversity breeds attitude, and the first crossing proved just the tonic for what was to become a nomadic life at sea for close on five years. In that time they scrubbed boats, cleaned toilets, sanded, varnished and did odd-job repairs wherever there was work going. They ventured up the East Coast of the States and back across the Atlantic to Spain and the Azores. In St Martin they met up with a large group of South Africans. “I found it fascinating how you have this entire transient community.” 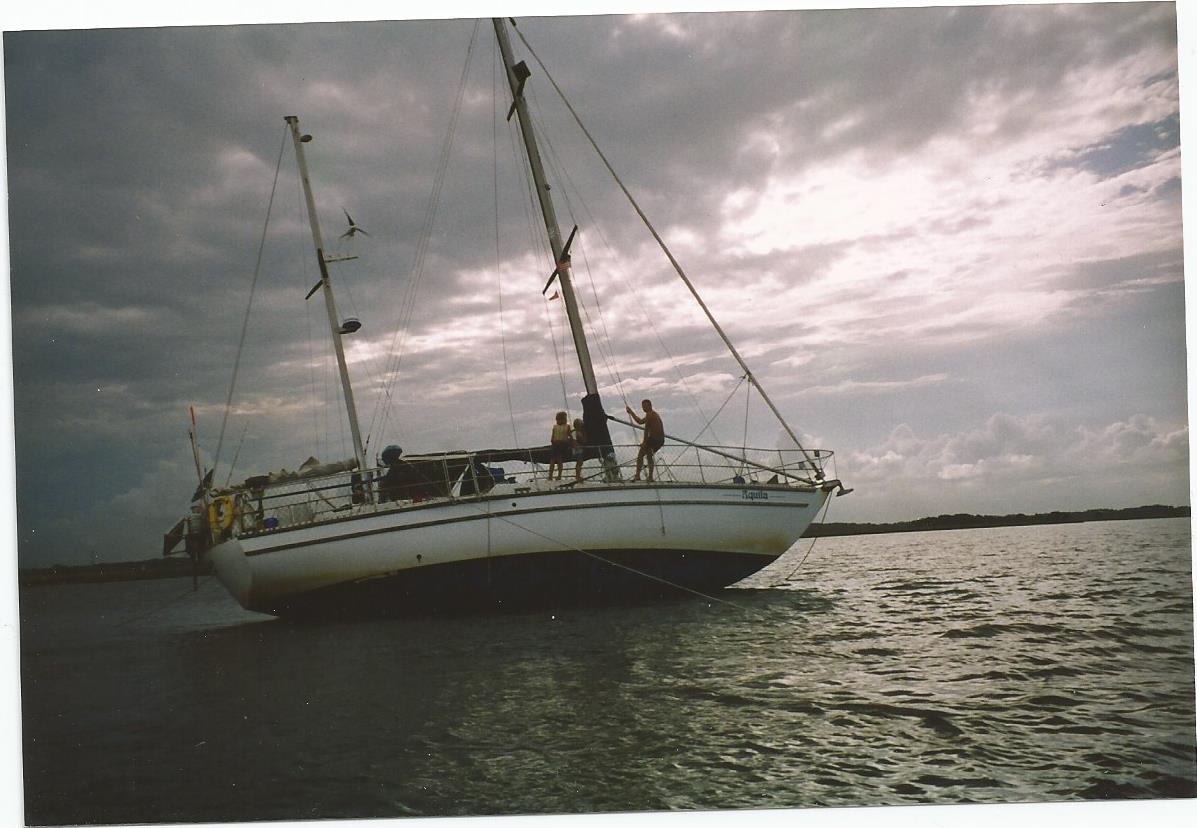 Along the way they got used to the rhythm of life at sea, the camaraderie and the solitude. Explains Karen: “Sometimes I just get into this zone of absolute peace.”

Other times were highly stressful, she adds, as one might expect for so long in a confined space. “I did find that ultimately you need to belong somewhere. I needed to settle. My eldest was in grade ten and we felt the need to have a permanent place.”

“I remember meeting Americans who said they actually wanted to get away from the system. But I came to realise when I got back there will always be rules and regulations, just different sets and types. Somehow you always have to conform.” 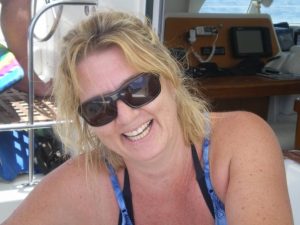 For Simone, who works on the web-design side of the business, sailing was a labour of love sparked by her racing-obsessed partner. “I am a sailing wife,” she quips. “It was a case of if you can’t beat them, join them.”

For Simone this entailed a rude introduction to dart sailing in KwaZulu-Natal. “We had just started going out and he threw me in as crew on the dart. I have NEVER been so cold and uncomfortable for an entire weekend. I got sworn at and verbally abused. After that weekend I decided this is not going to happen – I would rather sit on the beach.”

By contrast cruise sailing held tremendous appeal for Simone, who got her first taste of bareboat chartering on her honeymoon – ten days on a 30 footer. It helped that she was not a complete ocean novice, having gained crew experience on her father’s power boats.

In 2000 the couple relocated to the UK, the start of a migrant lifestyle that lasted over a decade. From there they moved to Belgium, then to Bahrain, then to Dubai.  With each move Simone reinvented her career, building up her own Ebay business in Belgium and then switching to work within an Islamic insurance company. However sailing remained a common thread throughout this period, even if it meant contending with a mere dingy.

Like Karen the constant uprooting took its toll, and Simone says it was a relief to finally come home: “When you are moving from place to place every couple of years you have no roots, no permanent home. You just don’t feel like you belong.”

That soon changed upon their return to South Africa, when they settled in Cape Town and joined a local yacht club. Simone quickly put her web skills to good use, helping to design a yacht club website. She has since teamed up with Ingrid Hale to help with the website for her new magazine Sail & Leisure. She is also helping guide the new-look SABBEX / Boating South Africa website.

She says Cape Town’s close-knit sailing community is just the tonic to recover from her years of globetrotting: “There is just this whole sense of everybody knows everyone – slightly incestuous. It’s a lot of fun too.”

Her sea miles include six Caribbean trips, as well as cruising holidays in Greece and Thailand.

Unfortunately husband’s sailing obsession had one downside – a rebellion from the couple’s two sons, who have sworn off racing. “They like the cruising though,” says Simone.  “Just like me.” 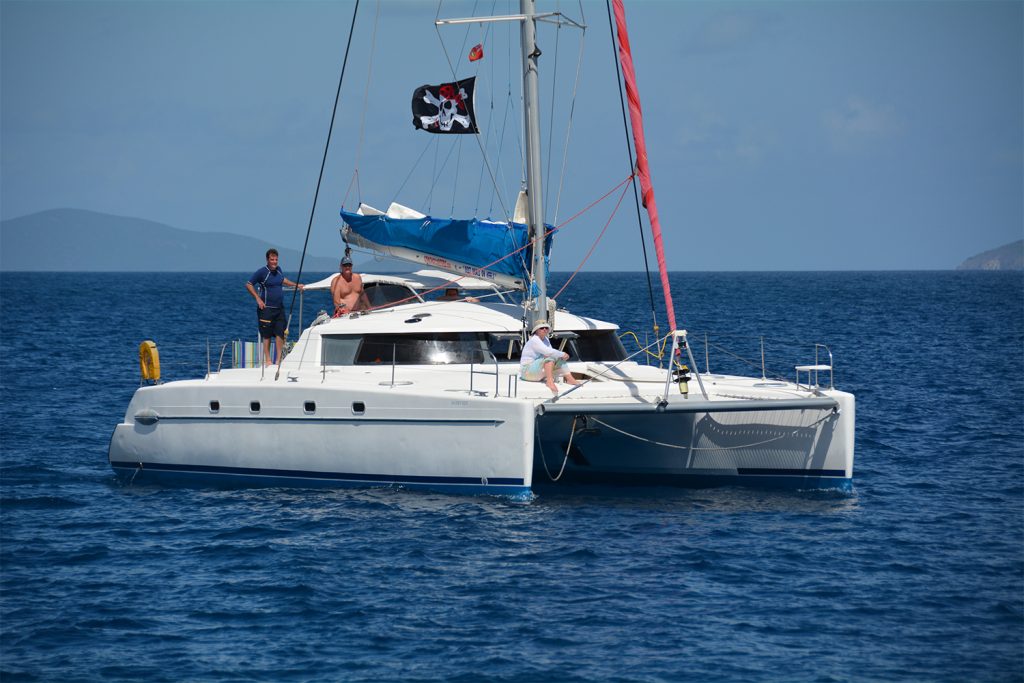 Vanessa Davidson had a similarly deep-end start to her boating career, in her case quite literally.  She was the first rescue swimmer to exit a NSRI vessel in stormy conditions off Cape Point sometime in 1996, for which she received an award. At the time she was the only female crew member at the NSRI Bakoven base.

“That was my intro to boating! It was a force nine storm,” she recalls with a wry smile.

Like Karen and Simone, Vanessa’s love of boating was also aided and abetted by a sailing partner who was eager to take up an offer to help crew a Voyage 500 on its maiden trip to the Caribbean. It was the start of a sailing career that spanned several countries. “We started doing warranty work for the vessel owner and met the Voyage charter crew,” says Vanessa. “We took our first charter on half an hour’s notice.” 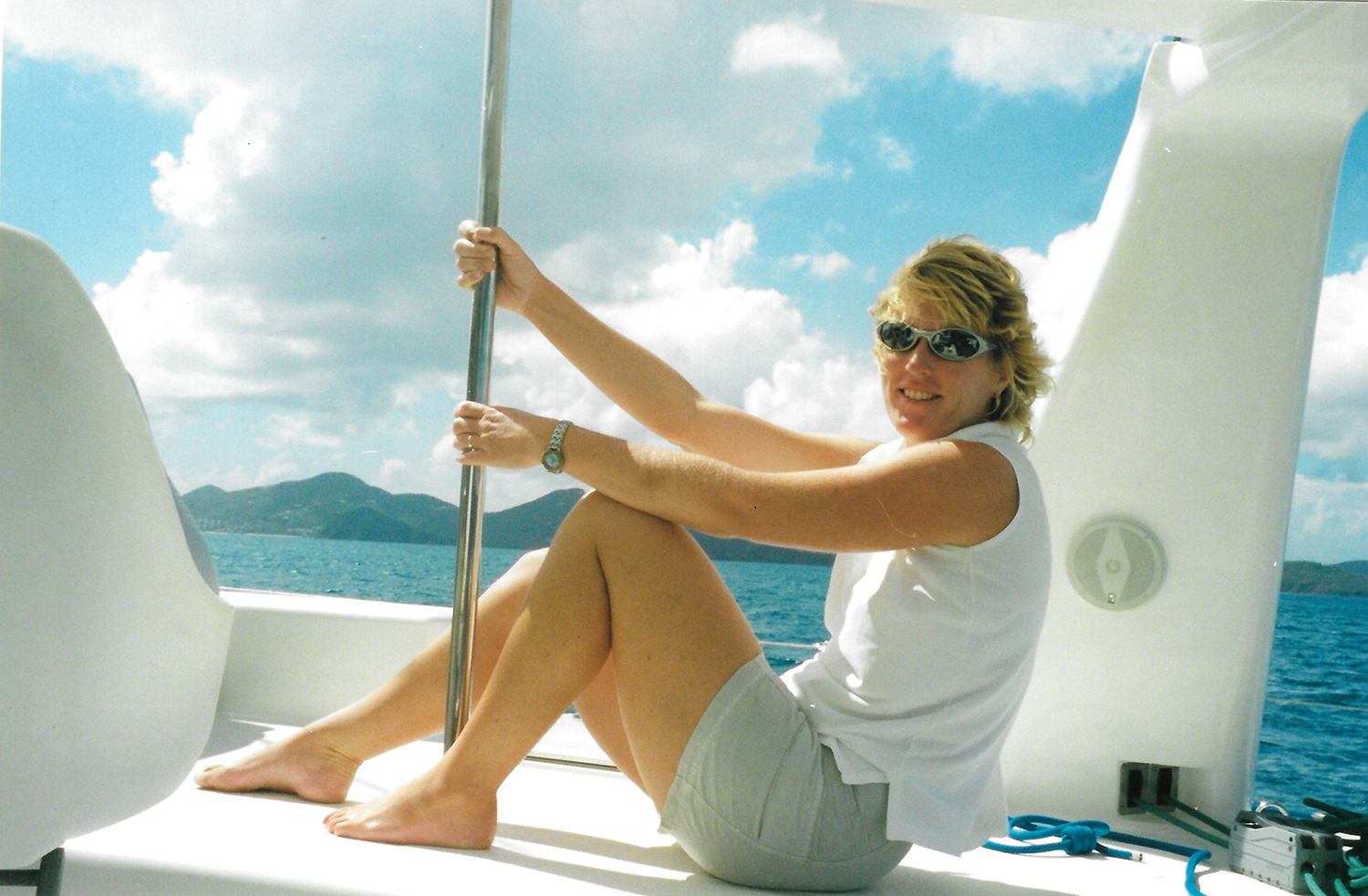 The opportunity came at the right time, with both having resigned from their jobs in Cape Town prior to setting off.  Four years later they were still running the charter boat, taking week-long charters of up to eight guests around the BVI. They also did a delivery from Annapolis back down to the islands, braving some bad weather on the way.

Vanessa says the charter lifestyle was a lesson in multi-tasking, as much as it was a lesson in practical psychology: “You have to juggle sailing with making chocolate mousse, listening to your clients’ life stories while making sure the kids don’t fall over the side.”

“You do absolutely everything – shop, prepare the boat, service the boat, cook five-star meals, serve cocktails, dive, carry dive bottles, windsurf, kayak, snorkel, party and drink rum. Everything about sailing and chartering I learned on the job.”

Their next two assignments were office-based, first in the Seychelles and then in Mallorca, managing the Voyage crewed boats and bareboats.  This entailed ‘broker liaison’ with various stakeholders which, while not as footloose as life aboard, nevertheless provided useful lessons Vanessa would later put to good use back in South Africa where she was also able to draw from her training in the education sphere.

She has fond memories of her sailing years, but agrees that there is a point when the most attractive journey is the return home: “You get to a certain point with chartering where you’ve just had enough of charter guests.  That said, the boat is your home and you get into the rhythm of charter life.”

“I remember cooking lunch and the next minute looking up and seeing a ray jump out of the water chasing a fish mid-air. You are very close to the sea and the environment around you, sleeping with the hatch open. At night I would lie awake listening to the fish eating on the coral.”

“But you work hard. By the end of it we were doing 26 charters a season, often going back to back with just 24 hours between one group and another,” says Vanessa.

A standout memory for her was accompanying guests on a unique dive mission involving a bottle of port produced in the same year that the British mail ship RMS Rhone sunk in a hurricane in 1865. “It was amazing to taste the port and then take the bottle down to the wreck. As the bottle was put down for the famous photograph, the modern day label floated off.”

For Vanessa the strangest part of coming home was “not having to close every single window when it rains”.  Being home also meant catching up on some much-needed deep sleep: “On a boat there is always a peripheral awareness of the sea, because in a sense the boat is an extension of yourself.  So it was great to get some deep sleep!”