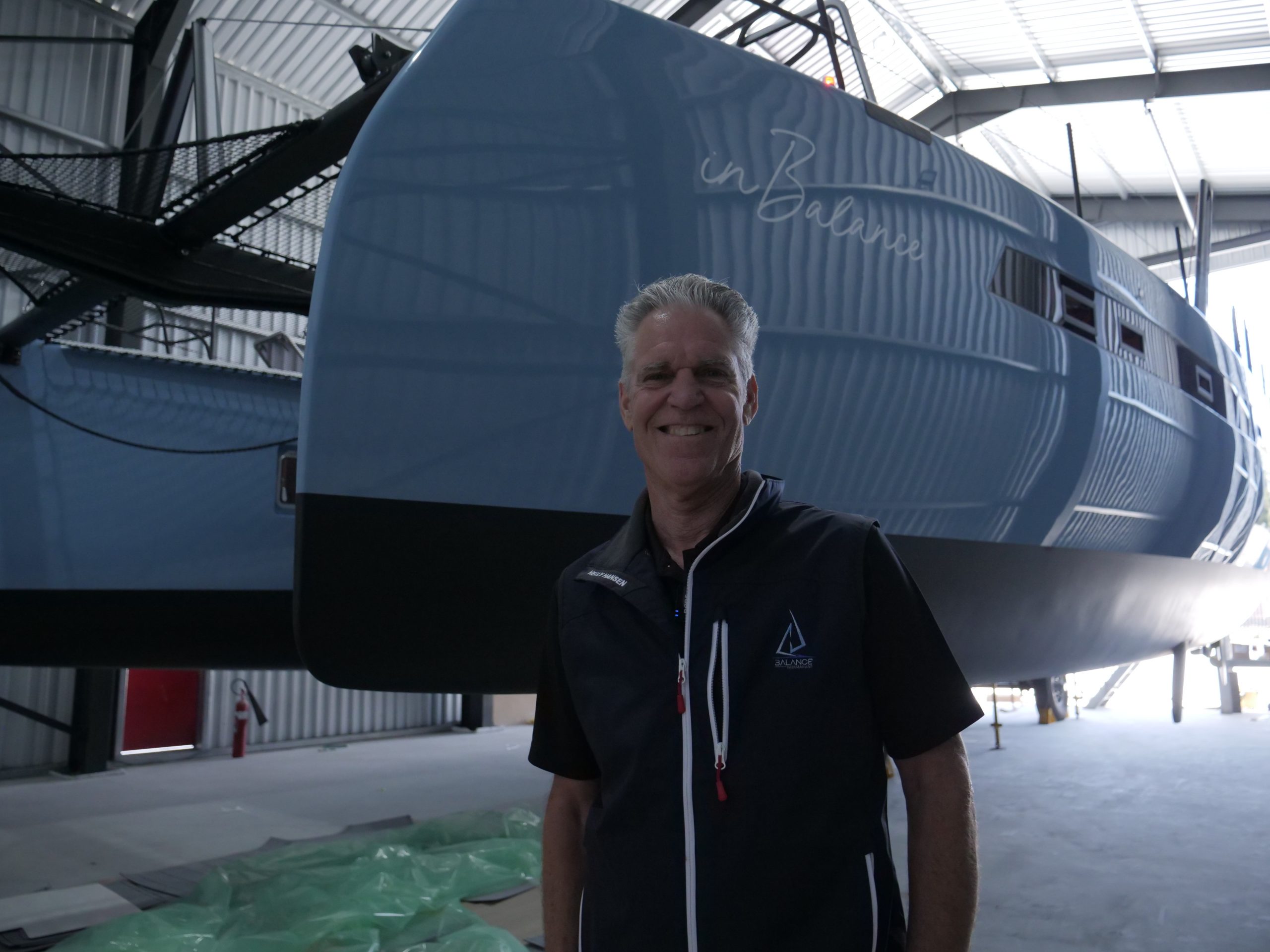 Phil Berman leaps up from the breakfast table like a spring-loaded gazelle.  “There’s our boat!” he yells, thumping down his serviette.

Outside a svelte Balance Catamaran cruises past, its red hulls dazzling in the swinkling waterfront world of menus and mainstays. Berman follows it, stepping between tables to get some cell phone pics as the yacht exits the V&A marina.

From their quayside berths a few diners anchor their cappuccinos and look up to see what all the fuss is about. The restaurant crowd might not know it but the fuss is about Berman. The go-getting American in the Balance Catamarans T-shirt is bow-surfing an unprecedented wave of success in the boatbuilding world, with a full house of awards for one of his flagship Balance models, the 482.

Three different awards – the three big ones – and three ‘Boat of the Year’ successes for the man with the film star smile who now rejoins me at the breakfast table to talk about recent business developments.

Balance is to local catamarans what Blitz is to braaivleis. That is to say Berman has added fuel to an industry already generating international attention for quality production. 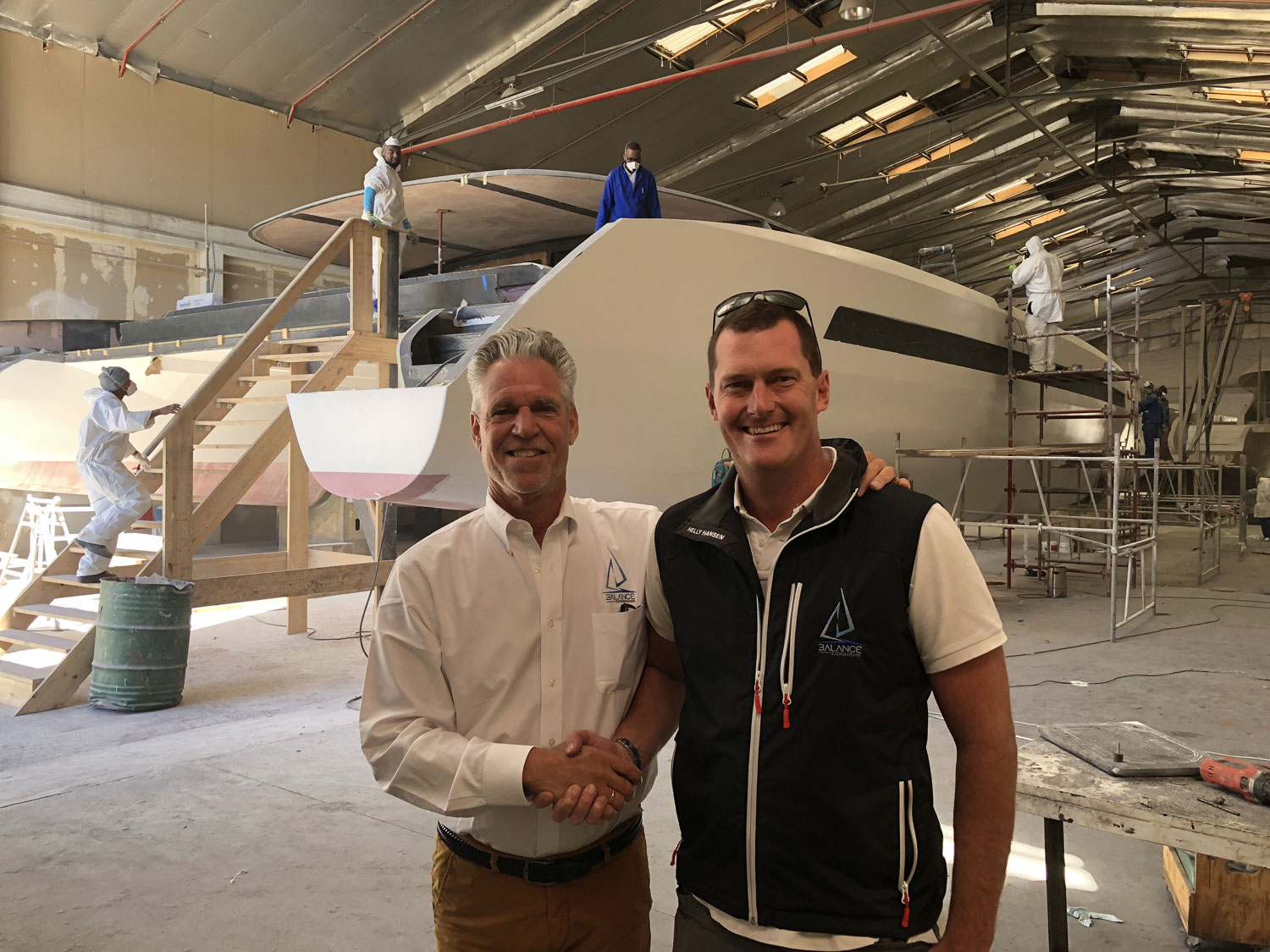 The Nexus /Balance partnership in St Francis Bay and more recently the Balance Catamarans Cape Town match-up with Two Oceans Marine seems to have helped local boatbuilding gear up to a new cruising speed – at a time when almost every other economic sector has contracted.

That Berman is visibly excited by the sight of one of his own boats cruising past the window is testimony to a standout quality underpinning his success: enthusiasm. The muesli-eating entrepreneur, who recently stood down as President of the large and well regarded  multihull brokerage company he founded twenty years ago, is equally excited talking about Mandela and the Rugby World Cup as he is about a new deck layout.

The Balance, now disappearing from view toward the Clock Tower Bridge, is a case in point.

“That’s an interesting boat,” says Berman of the day charter version of the 482.  “We think there are certain people for whom there is a demand for that type of vessel – we have requests to build more of these vessels which we are considering.

“It’s a dedicated day-charter cat, but that same boat could have a finished interior…could be made to be a live-aboard voyaging boat for somebody,” he muses.

“But if you increase its ability to power fast you decrease its ability to sail faster, because the stern is wider and more buoyant than on a sailing vessel. You would have to strike a balance.” Berman, suddenly serious, seems to be already contemplating a brand new design with his spoon as he corners some fruit in his cereal bowl. 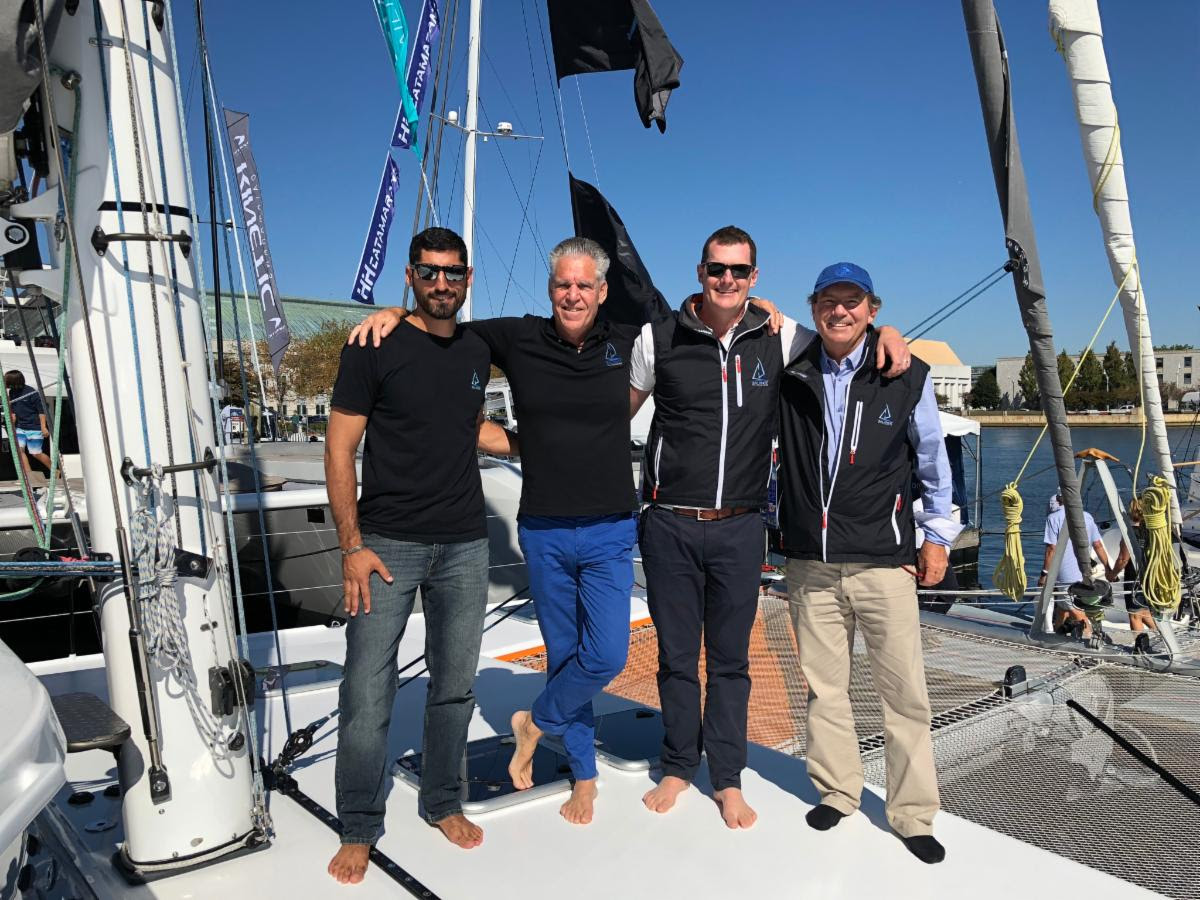 Demand. Finish. Balance. These are the three key words in Berman’s narrative arsenal. You hear them often whether in casual conversation or in his blogs and vlogs on the Balance website and newsletters; they delineate the Balance formula that also owes much to Berman’s choice of local boatbuilding partners. In Mark Delaney, Anton du Toit, and the Paarman family of Cape St Francis, Berman has put together a veritable dream team able to give effect to his vision.  The combination of Berman marketing nous, his customer base, and the South African skillset has clearly paid dividends on a scale that prompts comparisons with Robertson & Caine.  Is he intent on world domination? How big does he want Balance to be?

The question rather appeals to Berman, a former world champion sailor and founder of the world’s largest multihull brokerage company, The Multihull Company, which he recently sold to Will Miller. Certainly, at the current trajectory, anything seems possible. The next available production slot is 2026, with 30 plus Balance 442’s and 30 plus 482’s signed up with fixed contracts and deposits. Add to that 5 plus Balance 580s, 15 plus 526s, a 620 and even a 750, and it’s easy to see why Berman can afford to dream big, as he has always done.

“There is a lot of enthusiasm for the brand right now,” he confirms, not without a glimmer of satisfaction — well-deserved judging by all the accolades. In fact the burgeoning order book is almost problematic, says Berman.

“From a brand perspective, the demand presents us with a challenge. A lot of people are disappointed that we are unable to deliver them a boat sooner. So we are losing some customers.

“It is very important that we work hard to sustain our brand and the enthusiasm and trust with people who can’t get our boats, but who recognise that you have to wait for a while for one right now.”

Not a bad problem to have, he concedes, but one he nevertheless hopes to address by increasing production at his two South African facilities.

However Berman is not ashamed to admit that he may just be slowing down to a canter. Maybe it’s all the St. Francis air or the fact that he has tasted line honours before; it’s not all about production numbers at the end of the day. At 65, Berman is more concerned with being the best, or one of the best, not the biggest.  “The most important thing is that we turn out great boats,” he insists. “It is foolish to increase production and end up with a product that starts to degrade in quality. Let us keep our boat numbers down and keep building great boats. That is the goal: building great boats.” 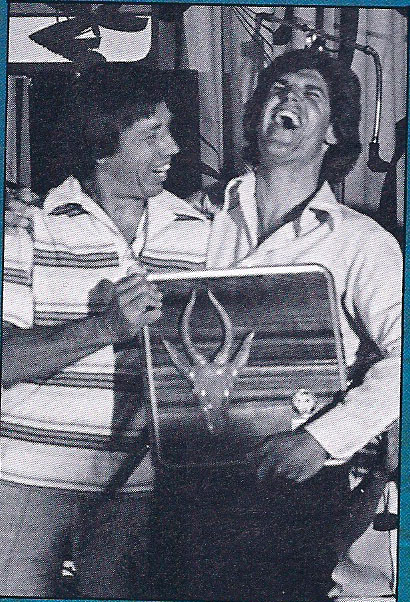 It is clear Berman feels at home in South Africa, as he appeared to be all those years ago when he won the 1979 Hobie World Champs in St Francis Bay.  His affiliation shines through in numerous ways, not least his affinity with the expression ‘n Boer maak n plan’ – he uses it to describe Mark Delaney (Two Oceans Marine) – and it’s just possible the African sun agrees with him.  Always a student of life – he studied philosophy back in the day – Berman says he’s interested in the South African split personality: on the one hand slightly catastrophist; on the other all sunshine and rainbows. A Highveld thunderstorm is how we behave, in other words, is Berman’s observation.

Berman prefers to concentrate on the sunshiny part.  “I think South Africans are generally very friendly and very positive. They are very positive in daily life,” opines Berman, pointing out that the flip side is that Saffers generally offer a bleak assessment of current affairs. “I look at South Africa as full of possibility. I look at it as a place that is ripe for growth and stability.”

It helps that Berman also sees himself as a political liberal, happy to be contributing to job creation in a country beset by rampant unemployment. At last count, Balance employed 450 people across its factory floors and is actively involved in skills development. “South Africa’s future is tied to harnessing the unemployed – that is everything,” is Berman’s stark assessment of SA’s daunting challenges.  Balance certainly intends doing its bit, with land already purchased for an expanded St Francis yard. 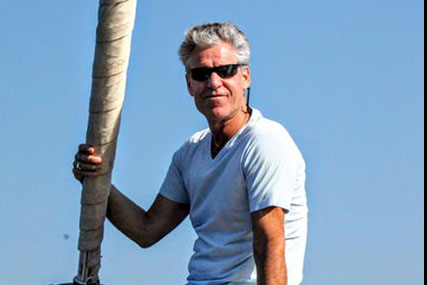 Berman is also upbeat about the global outlook, although he recognises we are living through uncertain times. He sees market growth in the Baby Boom generation which, like him perhaps, is eager for some respite from the stresses of modern life. There is also the new generation of Wifi-powered young entrepreneurs who no longer need to be office-bound to rule the world. For them too, there could be Balance.

Our breakfast is complete and sun tracks above the Tygerberg Hills to shine down on an unruly marketplace, of boat builders and buyers, and a bloke who brings them together.