TO INFINITY AND BEYOND: MEL THUNDERBOLT IS A BOKSBURG SUPERHERO 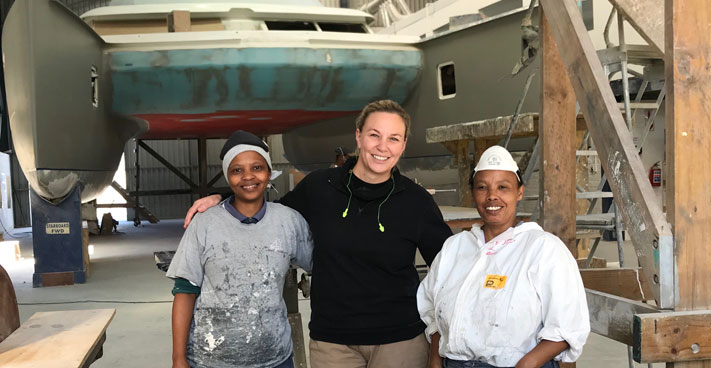 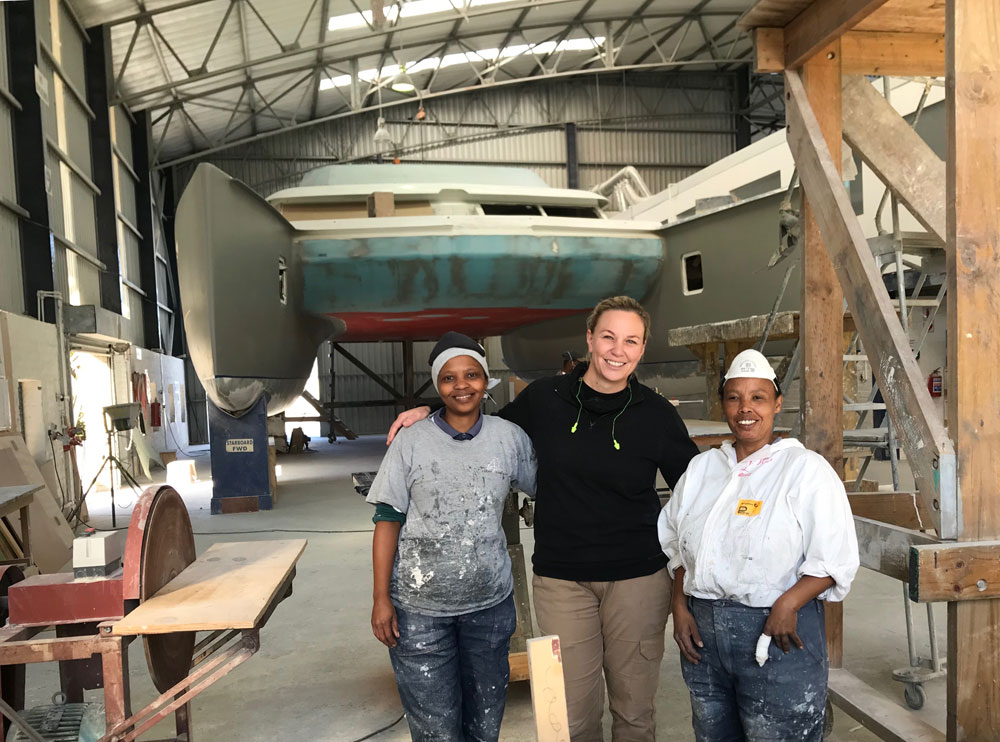 Like all action heroes Mel Thunderbolt has a super power: she grew up in Boksburg.

The fear of being stranded behind a desk or in a hair salon inside the East Rand Mall triggered a lust for adventure so extraordinary, so powerful, that Thunderbolt has lived a life the likes of which Boksburg has never produced, at least not since Boer War General Christian Frederick Beyers.

The likes of which you won’t even see at Ster Kinekor inside the East Rand Mall Cines 1 – 12. 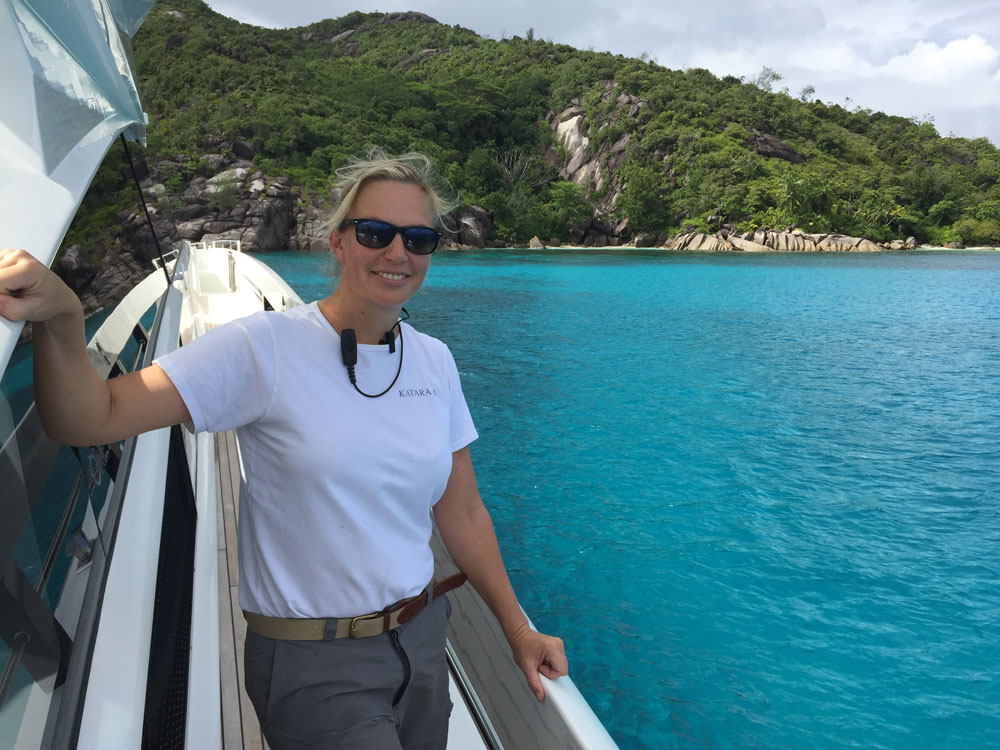 “I suppose I was always a bit of an adventurer,” Mel tells SABBEX from her new home in Sedgefield.

“Boksburg is a very landlocked kind of place. When I finished high school I didn’t know what I wanted to do.”

In fact straight after school Mel did work briefly at an East Rand hair salon, but only long enough to earn her ticket out – a flight to the US to work at a ski resort in New Hampshire. A casual job as a chairlift operator was the springboard to a series of adventures befitting her superhero name. 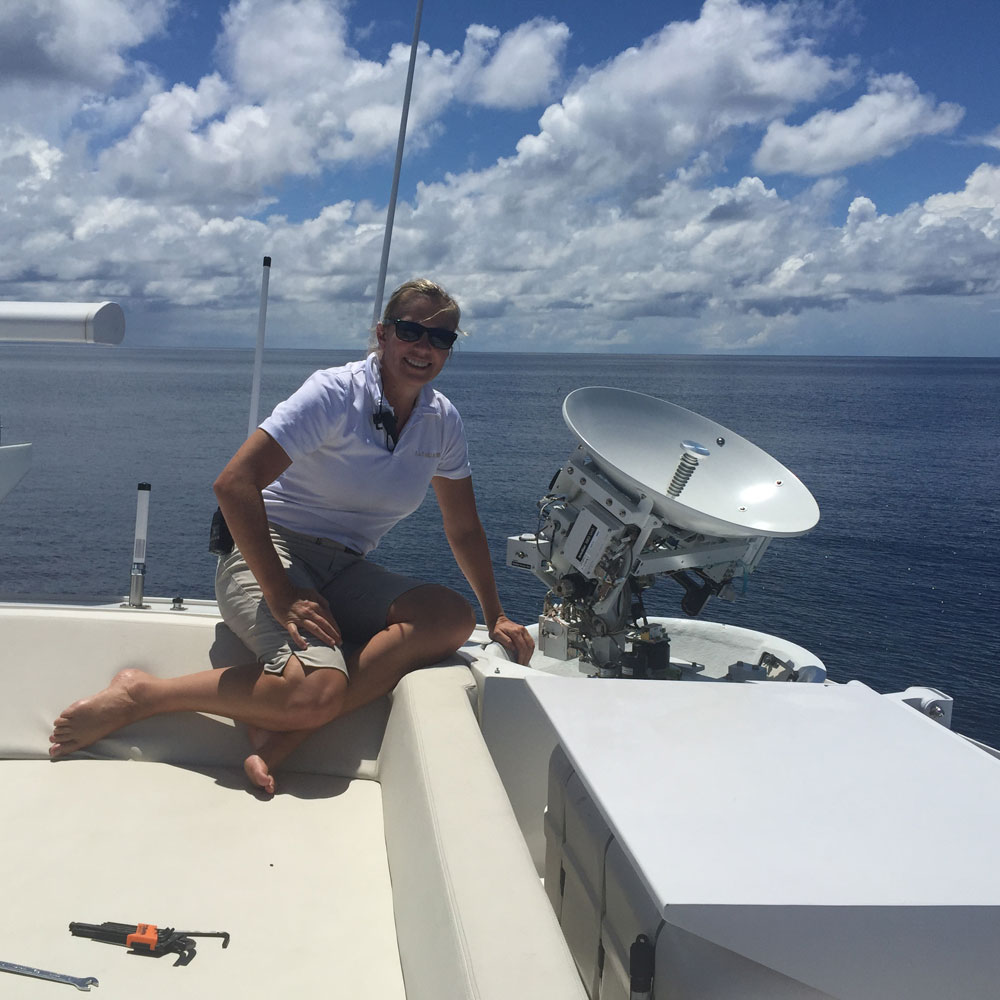 It was the late 90s. Back home South Africa was a caldera of Aids denialism and identity politics. Little wonder therefore that Mel extended her travel visa and flitted across the States working odd jobs with her boyfriend. It was during this time that she first encountered superyachts, in Fort Lauderdale where she joined the queue of day-workers standing on Standington Street. “You had to try and be first in line. People would come in their trucks to pick you up and take you to do some polishing on their boat.”

“At the time I didn’t know the difference between port and starboard.”

She certainly got the hang of that later on.

But first her life detoured to the other side of the world where she hitchhiked across Australia, again working odd jobs and at one stage falling in with a biker gang. “It turned out they were quite a rough gang – we struggled to leave,” recalls Mel with a wry chuckle, for it was the first of many lucky escapes during her global escapades. The next was aboard a scallop trawler, working as a cook for several grizzled deep-sea fishermen: “I had to catch a boat to get out there, only to find a lot of toothless fishermen and the whole inside of the boat collaged with porno pics. It was quite a rough situation.” 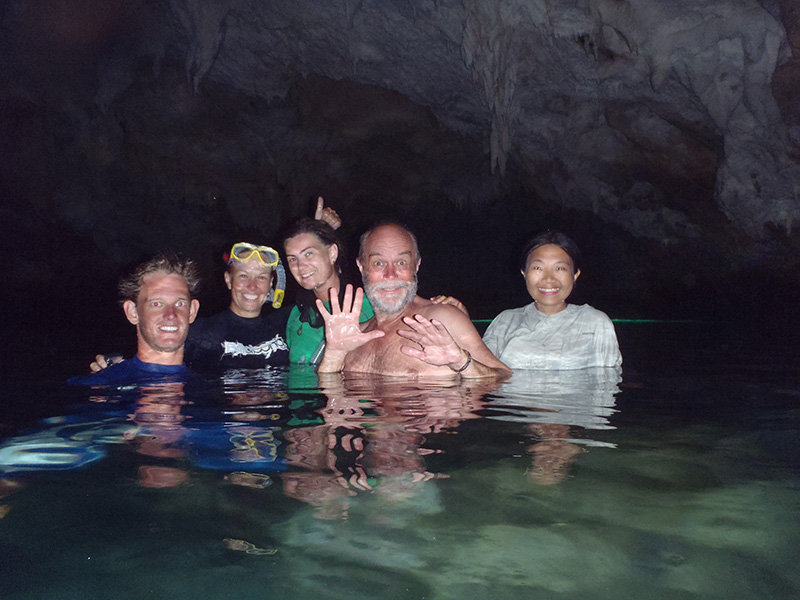 Two whole weeks she was stuck out there, sometimes cooking steak and chips at midnight for her bleary-eyed crew. If it was slightly traumatic it was also exhilarating, in a way that Mel didn’t immediately understand.

It was only upon seeing a magazine advert for Sunsail that she realised she had a deep yearning for the sea – a calling. Says Mel: “I just knew that this is what I wanted to do – get back to sea.”

“I remember at the time that song Babylon by David Gray was playing, with the lyrics ‘If you want it, come and get it’.

She decided to go and get it.

A blitzkrieg sailing qualification followed — a one-month ‘Day and Coastal Skipper course sailing from Durban to Mozambique. Recalls Mel: “That is how I got in – that was the start of my sailing.”

No sooner had she finished than she got her first delivery gig, on a Roberts 54 from Cape Town to Dubai.

“That was my first crossing. I had R500 to my name and I just had to take the opportunity. I was totally new to boating and it was about a month at sea with some serious squalls. We had to go more than 1000 nautical miles to avoid Somalian pirates.”

But whatever guardian angels were protecting her up to that point deserted her briefly in Dubai. She was arrested for ‘misbehaviour’ on her first night back on the hard after meeting up for with a friend for a celebratory drink. Wrong place at the wrong time, and the added misfortune of running into under-cover cops. She was in jail for weeks before somebody managed to get her out.

“It was like Die Hard movie in the end,” chuckles Mel with trademark humour, although it is clear there was nothing funny about it at the time. “Nobody spoke any English and we didn’t see sunlight for days. No bail. The British embassy and the SA embassy were involved.”

“My poor parents. They still thought I was sailing the high seas when they got a call from the SA embassy to say I had been arrested in the Middle East and could be facing four years and 110 lashes, and nobody was allowed to see us.”

In the end she received a pardon — she’s still not sure how – after three-and-a-half weeks of sleeping on the floor and going hungry.

True to form Mel brushed it all off as another travel milestone, and even stayed on in Dubai where she worked as a stewardess on a 20m Sunseeker.

It was during a visit back home however that she accepted a fateful delivery job, a Leopard 40 to Croatia via the West Coast. It turned into a three-month odyssey that all but sealed Mel’s career path in the deep-end of the maritime industry. She remembers the voyage as a rite of passage: “There were just three of us and one of the crew got off halfway, which meant it was just myself and the skipper.”

“We were stuck in the doldrums for a long time. It is amazing how we humans just adapt. The boat was brand new and I remember we were not allowed to even go to the toilet – had to do it over the side — which is not always the greatest for a girl.”

Challenging though the trip was it was also timeous: she hitchhiked her way to the south of France to begin a lengthy stint working on superyachts out of Antibes. “Back then it was not so flooded with South Africans and we were still respected when we got there,” she says with a hint of nostalgia.

Unfortunately, super yacht clients were not as respectful and Mel soon balked at the sexist trope of stewardess skorts and servitude: “It just wasn’t for me.”

As it so often does with Mel fate then lent a hand in the form of a mentor Captain who encouraged her to study for a Yacht Master in England. Her hands-on approach – she was parking 30m boats and doing all the lines – didn’t go unnoticed in a male-dominated world, and she was approached by a management company to skipper a 64ft Sunseeker. 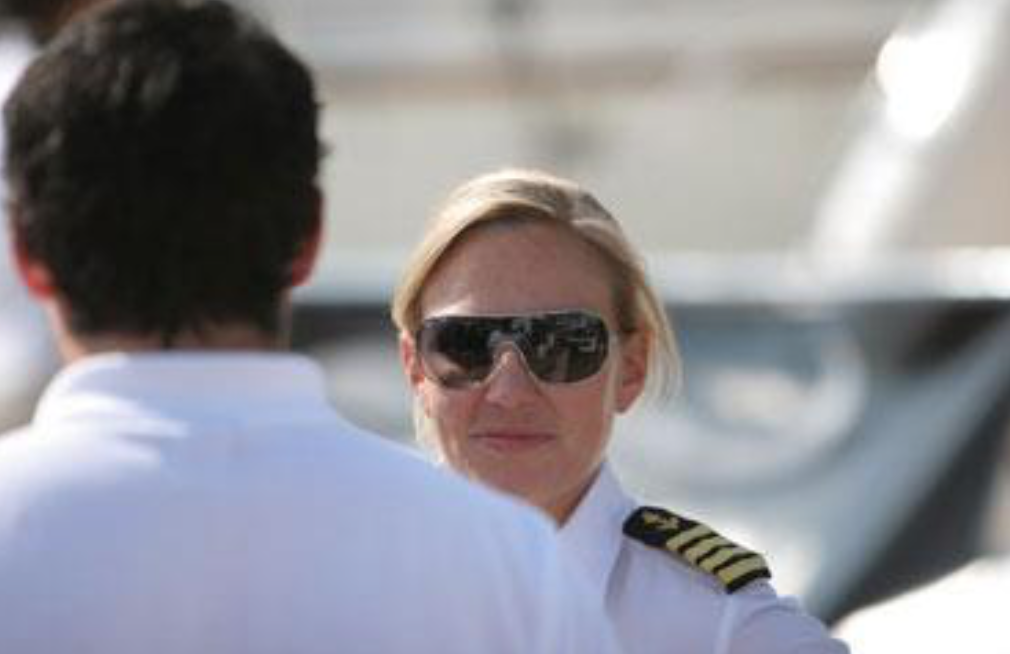 A life of last-minute charters and booze cruises ensued – not exactly what Mel had in mind when she left the East Rand. She worked both ends of the tourist spectrum, with weekend riff-raff coming to get tanked, and with VIP guests from the Monaco Grand Prix including the families of Jenson Button and Lewis Hamilton.

It was both the time of her life and a time to move on, for as much as the job helped pay the bills it showed her where she didn’t want to end up. 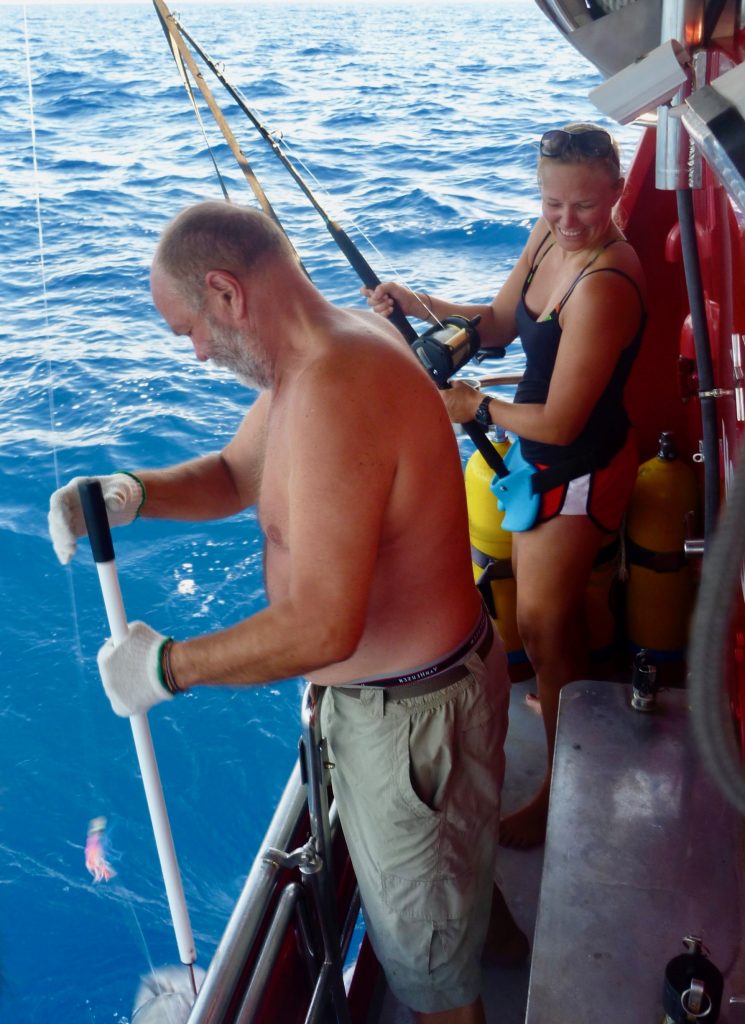 And so she did a 180 degree turn and started studying engineering, culminating in an oral exam in Liverpool. “As soon as I started fixing things in the engine room, I fell in love with it. As a skipper you are always dealing with guests – they moan and complain and demand. I prefer to be learning and problem solving. I don’t have to be in the limelight.”

In other words, Mel Thurderbolt took off her sun glasses and headed into the engine room, happy to be Melissa van der Walt for a while.

And to a certain extent that is what she is still doing, having up-skilled herself once again in yet another work domain. “There was a lot of me that didn’t know a lot about engines,” she explains. “I didn’t grow up fixing cars and there was definitely a void in my knowledge.”

The void didn’t last long. Since 2008 she has accumulated engineering experience in multiple locations, including the Med, the Adriatic, the Americas, Turkey and two years in the Seychelles. 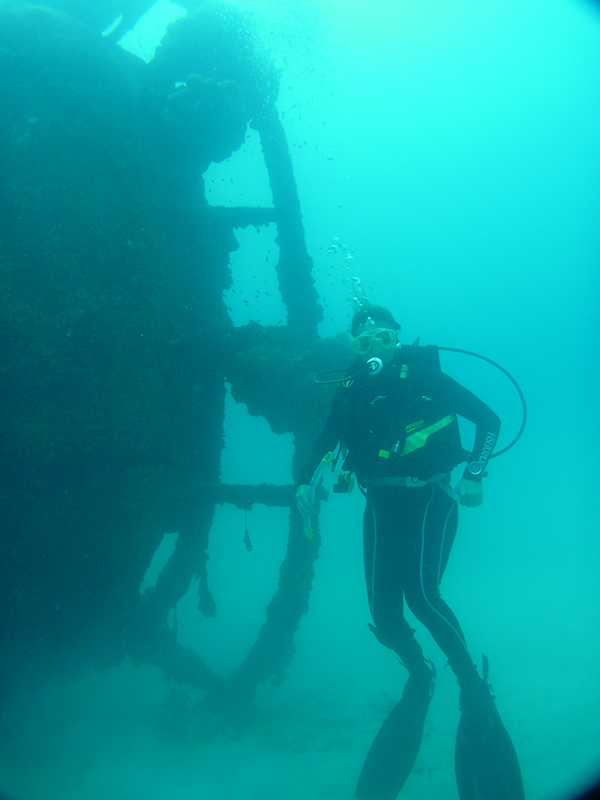 In between she kept adventuring too, and at one stage dropped everything to volunteer as a Mate/engineer on a dive expedition to search for sunken treasure in the Pacific. She visited remote islands like Palau, and atolls with names like Kapingamarangi, where villagers ran onto the beach in grass skirts and celebrated their arrival with a pig spit-braai.

Mel has now worked boats in every role, in most corners of the world. Her hope is to bring this wealth of experience to bear in her new role at Knysna Yachts now that she has settled down somewhat.

Yes, she thinks she might just be ready to put down some roots, having found the Garden Route. In 2018 she returned home and took a road-trip with her two dogs, a six month pilgrimage to find a home. “That is when I found Wilderness and the Garden Route, which has the forest and the mountains and the sea.

“It was just perfect.”

In October 2018 her boxes were barely unpacked when she was off again, this time to Antarctica, to work as a staff cook at five-star resort on a private jet runway on the ice. Why the hell not? She camped, in a one-man tent, the only woman in a cast of snowmen from Russia, Iceland and Canada. “The average temperature was around minus 30 and it didn’t get dark at all for three months.”

“It was very intense and definitely changed me. You just see this white, no movement. When I came

back to Cape Town I couldn’t believe all the rushing and colours — I felt like I’d been on Mars.”

By comparison Mel should get a taste of the quiet life in Knysna, where her official work title is quality control manager. She has sold her house in Johannesburg and is keen to grow into her new role in manufacturing, able to dip into a deep reservoir of personal experience. “Boatbuilding is a whole new game for me – it has opened up a new dimension,” she concludes.

Besides quality controlling new build catamarans in Knysna, Mel is also launching a brand of women’s workwear, complete with overall and dungaree designs. A cape wouldn’t be out of place in her new range.

No doubt more adventures lie in wait for The Thurderbolt, but maybe they’ve already begun.

Because as Boer War General Christian Frederick Beyers would most certainly agree, sometimes the greatest journey of all is finding your way back home.