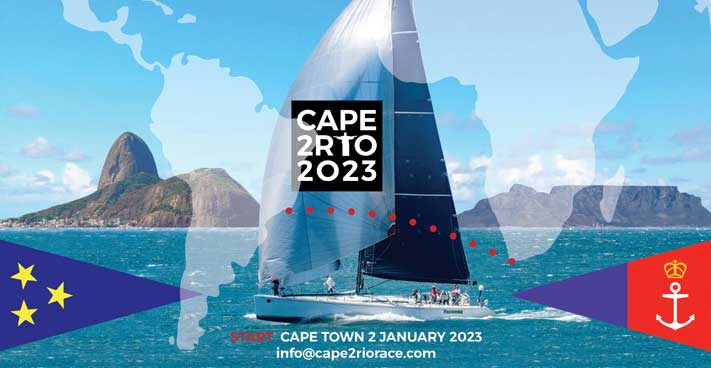 Just when we thought nothing could ever be the same, the Royal Cape Yacht Club has confirmed the 50th anniversary Cape2Rio Race, now entrenched on the sailing calendar.

Against all odds the home-grown sailing odyssey will go ahead in just over two years time thanks to some dedicated trans-Atlantic networking.  The 2023 event already has its first confirmed entrants, less than a year since the conclusion of the January 2020 edition.

The admin triumph is thanks to sterling efforts of a core race organising team, according to RCYC Commodore Neil Gregory. “We initially said, right, if we had another race in 2023 where would we go to?” Gregory told SABBEX. “A whole lot of locations were identified, and we wrote to a whole lot of yacht clubs. We got very good responses.”

Gregory singled out the networking prowess of Race Director Anthony Spillebeen in sealing the deal with the Brazilians: “He had somebody in Brazil who was able to broker the deal,” Gregory said.

Once the participation of Clube do Rio de Janeiro had been confirmed, the next step was for the Race Committee to decide on the format of the 2023 Race. Said Gregory: “We will consider single-handed entries for the first time since 2006, but it will be at the discretion of the Race Committee.” The fourth and final key step was the confirmation of the starting date, January 2.

Not only would the Race guarantee a cash injection into the local economy, it would further consolidate Cape Town’s growing international standing as a sailing destination, according to Gregory.  “One aspect we learnt is that Cape Town has really been put on the map thanks to recent events such as the TP52 Super Series, the Cape 31Invitational and the arrival of some of the Vendée Globe boats.”

Last month RCYC confirmed “Black Pearl” as the first official entry.  Other confirmed entries to date include an all-female crew aboard the “CRILOA’ , an entrant in 1976.  She continues a lengthy tradition of all-female crews in the Cape2Rio: “Female led crews are not unfamiliar to the Cape2Rio Race,” the Race Committee said in a statement. “In the inaugural 1971 race Molly Warr of the Royal Cape Yacht Club led an all-female crew of five to Rio, sailing the 9.7m Sloop Sprinter.  They crossed the finish line in 44th position and ended up 27th on handicap.”
“In 1976 an all-female crew from Italy led by Zara G. Pascoli arrived in Cape Town with the Impala35 Criloa built in 1973 and a crew of 6 to compete in the race. Zara, an accomplished sailor, had previously sailed in The Whitbread Round the World Race 1973/4 with her husband Erik on Tauranga. Looking forward to 2023 we will be able to witness the return of Criloa who will be skippered by Carina Joana and together with Maritza Oliveira they intend to lead another all-female crew,” the statement said.

Cape to Rio was first staged in 1971 and has since become one of the world’s foremost sailing events.