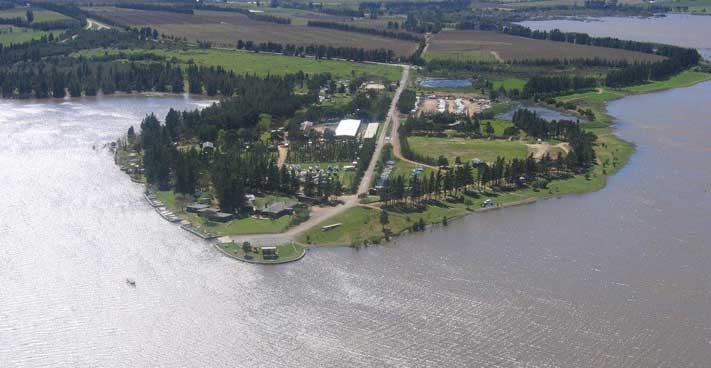 An overflowing Theewaterskloof Dam is great news for water supply, but it comes with an unexpected conservation challenge: illegal fishing.

Members of the Western Cape Bass Angling Association last month removed a kilometre-long gill net in the Dam’s shallows, presumably deployed by subsistence fishermen who used bits of old rubber slip-slops as floats. The find has raised concern about rampant poaching at the resurgent freshwater site which has rebounded after dropping to just 10% water level at the height of the recent drought.

“A bunch of our small craft league guys got hold of me and said they had found the net,” Marc Bywater told SABBEX. “It was too big to pull out, so they asked for help from some of the boats. They helped get it out and released some Carp and other fish stuck in the net.”

The group then notified Cape Nature and contacted some local farmers who burnt the net in a safe location. Pictures were also supplied to help local authorities with their investigation.

Although the culprits were not identified, they had left behind evidence in the form of clothing and a fire on the bank.  Authorities said they would conduct additional patrols in case the illegal fishermen decided to deploy another net.

“This is really the first sign of any gill netting that I’ve heard of in years,” Bywater said, adding that the concern was that the practice may catch on, to the detriment of the natural environment.

The use of gill nets, condoned in some areas such as in the Van der Kloof dam where government has authorised an experimental inland fishery, is controversial, particularly among recreational fishermen who fear negative environmental impacts.

However the good news is that the Theewaterskloof Dam is currently looking better than ever, Bywater said. “It is looking very, very very positive. The water is clean, allowing the fish to spread out more and there’s a lot of activity in the shallows. Everything seems to be coming back to life.”

“There has been an increase in the bass population and I saw fresh water terrapins which I haven’t seen in a while.”

“Blesbok are feeding in the river channels and bird life is incredible,” Bywater said.

The good conditions are welcome news for local anglers who were stuck at home during Covid-19 hard lockdown. Now angling is back in force thanks to a range of health protocols and the use of an innovative app (Weighmasters.net) to record daily catches and add to a database of tournament records.

2020-11-05
Previous Post: ST FRANCIS CATAMARANS  WEATHERS THE STORM
Next Post: HOW TO CHANGE THE WORLD IN 28 DAYS