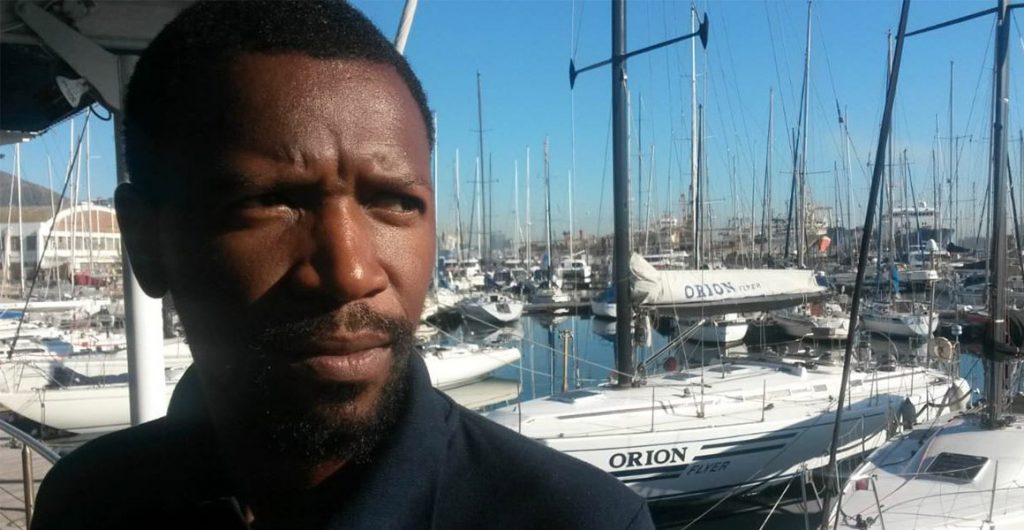 SABBEX: Did the appointment come as a surprise or has it been on the cards for a while?

LM: I was busy negotiating a contract with some people and there were some difficult aspects of the contract we needed to get our heads around. I reached out to a few people for advice and one of those people pointed me in the direction of Abro, many people will know Abro is a man of many talents, so he happened to be well versed with this particular issue. As Abro was going through my contract he was impressed by my CV as it were. A week later after I had finalised my contract Abro said to me, ” Lindani I have an interesting idea, let’s go for coffee in Newlands. Next thing I know Abro is offering me a role in his Brokerage and it just seemed like a good day to accept. If you are going to make a silly decision do it quickly, lucky for me it turned out to be a very smart one.

SABBEX: Sharp/Abro is a key player in the boating market. How does it feel straddling both the leisure and commercial boating worlds?

LM: Ignorance has always worked in my favor at times. I always set my sights on the stuff that seems far away only to realize at a later stage just how high I actually jumped. I don’t think it gets better than to be learning from the best in the game, it’s what we all hope for. You are only as great as the greatness around you. So yeah I am in great company and that can only bode well for my future endeavors. As you know, my passion is the Youth, specifically historically disadvantaged youth, a majority of that youth is Black and probably Female. Every space that I encounter I occupy it with the view of opening a door. Leisure and Commercial boating fall into that ethos.

SABBEX: The appointment comes at a time when industry is under pressure to transform. Your can-do approach and skill-set could help move things along. Would you agree?

LM: Transformation must be mutable otherwise it will not live up to its ideals. Once we start using words like pressure, we are already on thin ice. In my mind business is about success. It is the success of a business or industry that allows the opportunity to do more. The industry should not have to be put under pressure to transform, the industry should see transformation as an essential component in creating more success and my belief is that’s what has inspired Abro/Sharp to approach me and make me a part of their operation, my being black won’t mean anything if I don’t bring value and in turn success, yet if I do, it will mean everything.

SABBEX: Will this new role involve some traveling up north? How do you foresee juggling this with your RCYC / SABBEX and other work commitments?

LM: Motion. Motion is everything in this part of the universe. I learned that doing deliveries, no wind no motion, no motion no direction, no direction no destination, no destination no arrival. Indeed I will be doing traveling up Continent and I look forward to it. I believe Africa is still a sleeping Giant even though it has given the world so much already the world keeps wanting more. Yet the Continent itself remains a paradise that yearns to be explored. The West and East coast have incredible Islands and pristine waters that could easily become the future Caribbean. In terms of RCYC and SABBEX, I believe it is in the interest of the whole industry for me to spread the Gospel as it were. I have a strong support system behind me.

SABBEX: Rob and David are not alone in targeting West Africa in particular for market growth. However we live in uncertain times. What to you are the biggest challenges with regard to economic growth here and in Africa generally?

LM: Very few people can claim to be the first of much anymore, whether we like it or not we keep recycling old ideas with new approaches. Political instability is always a thorn in our side in Africa, I won’t go into the forces that bring it about, but we can tackle the cornerstone of Africa’s problems, poverty, which is fertile ground for every sort of horror this Continent has had to endure. Yet all over this continent, you find huge multinationals doing business, creating success, even though there is lack of infrastructure and so forth, Big business is still doing business on the Continent. What that tells me is there is an opportunity to engage with locals on the ground and do business. My biggest challenge therefore will be finding partners on the ground.

SABBEX: You’re passionate about development sailing and recently had to stall new recruitment into the RCYC Academy programme due to funding issues. Is this due to Covid-19?

LM: I am extremely passionate about development sailing and indeed the funding issues we are currently experiencing are due to Covid-19 and the subsequent lockdowns we have had to endure. The funny thing is we were all probably safer out at sea. I remain optimistic that we will get funding once the wheels of the economy start turning again.

SABBEX: Does development sailing go beyond producing skilled sailors? Does it also address boat ownership or is that a whole different tin of sardines?

LM: Development sailing is about the full spectrum of our industry, our core purpose is to empower youth from historically excluded and under-served communities not only to sail and be confident on the water but to thrive in the blue economy as a whole.

SABBEX: In the past yacht clubs were perceived as lily white. They still seem fairly white. Is this testimony to ongoing structural inequality and what more can clubs / sailing associations do to become more diverse?

LM:I wish I had all the answers, I wish I could just tell everyone that is willing, to do just one thing and we would wake up living in a transformed society. Yacht Clubs are a microcosm of South Africa at large. This is a country that was forged in race and class politics. The work we are doing is generational work. The only question we should constantly ask ourselves is whether we are still moving in the right direction. We all know what we want to see. We want to see diversity in all its forms, that is the destination. How we get there will vary according to the conditions on the ground, when we get there will depend on the energy of the people. Segregation laws are gone, we all know that, yet the outcomes of those laws still remain with us to this day, some perceived and some real. Unfortunately, perception feeds into reality and vice versa. Clubs remain white because they have always been white, people of colour perceive that reality when they come into direct contact with clubs and then that keeps them away which in turn keeps them white. How to get around this? We have to keep trying until we retain a critical mass that will pull the rest. Most clubs have development academies, for youth; the next step is to get the parents involved.

SABBEX: You also spoke of your appreciation for RCYC members coming to the rescue of the Academy during Covid by funding electronic devices for remote learning. So it seems there is hope? How did this come about?

LM: Spes Bona. There will always be hope for eternal optimists and realists alike. In the midst of the Pandemic, we at the RCYC Academy suddenly found ourselves cut off from our learners. It was like a severed umbilical cord, some of our youth do not have phones let alone laptops to do school work or communicate. We suddenly found ourselves having to innovate and make our product offering available online, lucky for us there was a member of the club who had an online learning platform for grade 10-12 students and she said she could offer this to our learners for free, I then asked her whether she could turn our sailing manual into an online curriculum with assessments and tests. She did one better, she took our manual incorporated it into her platform with diagrams to teach the practical aspect of sailing too albeit visually with illustrations. When we achieved this milestone the next challenge was finding affordable devices and someone who would pay for them. I found the devices through a contact at Law Hill maritime school, they had just procured them for their learners. I was almost there. The last mile was the funds. So I did what I do best: I wrote a letter to the members of the RCYC and just told them the truth, we were stuck and we needed funds. The letter went out on a Thursday and on the Saturday of the same week I received an email from Phil Wade and David Abromowitz. Phil Wade heads up Marine inspirations an NPO based in Palma de Mallorca, raising funds within the Yachting community in Europe to sponsor South African from historically disadvantaged youth to travel to Europe and experience the industry first hand. I am always amazed at how many people actually want to do good in this world.

SABBEX: Do you think the lessons learnt during Covid lockdown could accelerate action needed to address economic growth? Do you perceive a greater urgency in the corridors of power?

LM: If Covid-19 does not accelerate action then we are all in big trouble and everyone should buy a boat preferably from me at Abromowitz Sharp and Associates, ask for the Associate, and we should all become water people. On a serious note, I don’t like to comment on politics and those that play that game. What I know is that if they don’t get their act together there won’t be a country left to govern. South Africans are an ingenious lot, look at our exports, Elon Musk is on his way to becoming the richest man in the world. That tells you everything you need to know about us, we have the ability, all we need is fertile ground.

SABBEX: At a personal level, what drives you? What is your measure of personal success?

LM: My father tells me that my grandfather was a wealthy man, during deep Apartheid in the ’60s and ’70s, he had a factory in the township, employing over 200 people, he came home at 14:00 every day to have lunch with his kids and had a chauffeur, my father told me my grandfather never worked for a white man again from the age of 30 or so. In our family my grandfather is a looming shadow, towering above us. I think what my father was saying is no excuses Lindani, no excuses. Through insurmountable odds, our people make it and prosper. I think this is what drives me at a personal level this family story, I come from a bloodline of men and women who scoffed at Apartheid all it did was limit their movement but not their minds. The measure of personal success? Well here is the thing: most of the small victories I have celebrated in my short career in this industry have been either alone or with white people, who are genuinely happy for me. Most of the time in meetings I am the only black guy, whether at RCYC or elsewhere. In a country of 35 million or more Black people that is crazy. How can you be the only black person in any room? My personal success is directly linked to my people, I want to leave a wake of blackness.