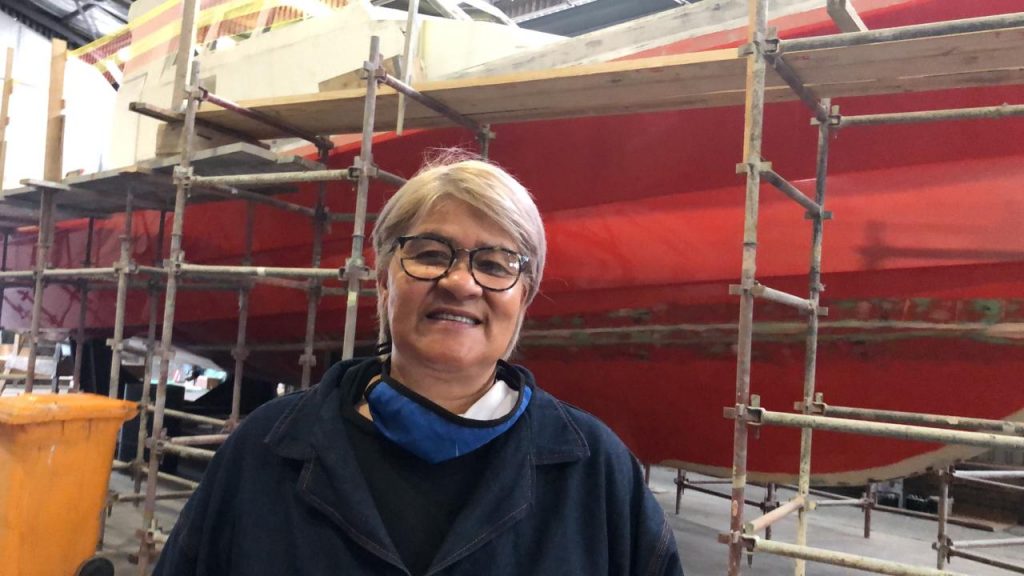 Margie Hannie sits opposite me, her head almost completely covered by a facemask and a thick woollen beanie the colour of tuisgemaakte trifle. I see only the slits of her eyes, smiling at me through a pair of tortoise-shell spectacles.

Hannie is sitting in a board room inside one of South Africa’s busiest boat yards, our introduction accompanied by a background hum of heavy industry. Her hands, clasped business-like in front of her, suggest a life story of unusual texture. Her branded Two Oceans facemask would raise a few eyebrows back in her hometown of Suurbraak, as would her factory floor boots. The sleeves of her denim jacket are rolled up in the style of somebody who likes to be busy, rather than sitting in the Klein Karoo sun.

By her own admission Hannie’s journey from a poor rural town that most people would struggle to find on the map, to being head of production and lamination of a global player in marine manufacturing is more than a little surprising.  To achieve this she overcame not just gender inequality, but class and race barriers that came to define South Africa in latter half of the twentieth century.  Now 64, Hannie’s career has spanned several governments, the end of the Cold War, and the advent of democracy. Not to mention marriage and three kids.

And she did it all largely by herself, having lost her father early on in life. Her mother worked in a bed and breakfast to support six children, which meant she and her siblings had to do what they could to help out.  She attended high school in Riversdale and couldn’t always afford to travel home.

“My father was not a healthy person and only my mother worked,” recalls Hannie. “So the two eldest (siblings)  left school early to help, because they had to.”

It was a sacrifice that enabled Hannie to finish her own schooling and move to Cape Town where she initially followed one of the few career paths available for young women at that time, teaching, encouraged by her family. She duly enrolled for teacher training at the City’s Zonnebloem College.  It was an uphill battle, even with English lessons from English-speaking relatives, notably her aunt. “Suurbraak  there is just Afrikaans, so when I came to Cape Town it was like, yoh! And Zonnebloem College was English, so even though I got through it was difficult for me.”

But it was the chaos of small children that prompted Hannie to strike out on her own, convinced her future lay beyond the classroom. “I just decided it was not for me,” she chuckles behind her mask.

It was a defining moment, for her job search nudged into a manufacturing orbit in Cape Town’s northern suburbs, first at Nylon Spinners in Bellville and then at Golnix, the latter a well-known manufacturer of polyethylene and glass fibre electrical kiosks and enclosures used in the Electrical Reticulation industry.

“That is how I got into fibreglass,” says Hannie of her five years at Golnix. “They built fibreglass boxes and small ski boats. They took me on as a laminator.”

If Hannie had an instinct for opportunity, she also knew when it was time to let go – an aptitude that goes a long way in explaining her success. She left Golnix when her first child was born and didn’t go back. But if Golnix had been her induction into lamination, her next opportunity put her on the fast track to future success – a job with Stan Robmarine under industry stalwart Stan Roberts.  That was 1985, the dying days of the Apartheid regime and a time of tumultuous change. Dynamics on the factory floor changed too, with new opportunities for women and the lifting of the colour bar restriction on grades of work. “A lot was different,” says Hannie. “When I started in fibreglass it was more coloured laminators and the office staff was more white people. Then more Xhosa people came in.”

Working in the engine room of the South African economy, Hannie had a front-row view of history. She worked 12 years for StanRobmarine before the yard closed.

For Hannie it was another case of turning adversity into opportunity as she quickly found work with what was then a little-known start-up, “a small little factory”, called Two Oceans Marine. “June 13, 1997,” remembers Hannie, her hands now unclasped and talking along with her, warming to her story. “You could only fit three or four boats into the factory. And he was just a piekenien,” she gestures towards chief executive Mark Delany on the other side of a glass partition. There is a hint of matronly affection when she laughs at the dizzying timeline stretching out before her.

In Two Oceans Hannie discovered more than a job; the melting pot of skills acquired across the years allowed her to thrive where others might have wilted under pressure. “I loved it from the beginning,” she beams, her eyes lighting up.  She ascended quickly, working her way up from laminator to leading hand, and then to supervisor.  Her time in education paid off for she was soon instructing others on the finer points of lamination: “I like to work with people (not with kids),” she agrees, “I am a people’s person.”

At one stage even her husband worked in the factory.

As the factory grew so did Hannie’s role within it. A bigger facility in Paarden Island beget bigger boats, much bigger; she recalls renovations to the factory roof to accommodate a large ferry build: “I just grew as the company grew. To come to work every day, it was just lovely.”

“We built small boats, and then started on bigger ones.”

And the trajectory continues, with Hannie now juggling job cards for some of the biggest hulls in the industry.  She now supervises a team of male and female staff, working across numerous boats.  With great glee she walks me through the new Two Oceans facility in the Port of Cape Town, already bustling with activity. In the far corner a Magnum in the final stages of production; in the foreground the beginnings of a Balance 482. Around the corner we pause for a photograph in front of one of several new NSRI rescue craft.

Hannie insists she is still learning something new every day, with every new job requiring new specs and new instructions: “Every day I learn something about boatbuilding. That’s why I say I’m never too old to learn.”
“Sometimes there are things on a drawing that I don’t know, and I’ll just phone him and ask him.”

Does the pressure get to her? She smiles. “Today I have four people absent, and I must start Balance Number three.  I must catch up.”

“It starts by me. If I am behind then this morning they come to me and say, then you must take on more people.”

Hannie says she has also learnt how to assert her authority when necessary, particularly in relation to sexism. “I make it clear with everyone,” she says, a steely look in her eyes. “I can be a woman but people must remember that I’m in charge.”

Hannie is less certain on the subject of her retirement, due in September next year. “I will miss this,” she says, casting a look around the room. “Just my husband and me in the house – what will I do the whole day? “

“I must just get used to it. One can’t work forever.”

Her attention turns to her three children, all married, all on their way with tertiary qualifications thanks to their mother’s financial support. Her resolve to see them succeed is stronger than vacuum bag fibreglass. Like the boats she helps build, she is a class act.

Hannie may not know what the future has in store but one thing is clear: she has more than earned the right to pull her beanie down over her eyes and retire to a stoep in Suurbraak, should she so wish.