MAN FOR ALL SEASONS 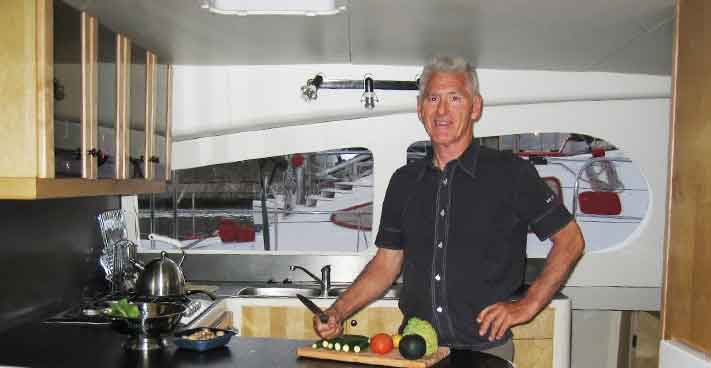 Fred Scholtz casts his mind back into a deep pool of long ago and fishes out the moment he is looking for.  He is a teenager again, the 1950s, working in the garage with his dad. They are building a sailing boat, by steaming oak frames, bending, and covering with Mahogany planking.  “The old traditional way,” Fred says of his early woodwork lessons at his home in Durbanville, Cape Town.

It is the moment Fred became a boat builder, there or thereabouts, because that first small boat when he was 12 beget another bigger one, as is the way with most boat builders. From small beginnings come multihull endings, and so it was for Fred Scholtz who built his way up one hull at a time to himself become part of the woodwork of the South African maritime industry.

Now 78, Fred is talking to me from his current home in Sundays River where he lives with his girlfriend Juanne. My call was unexpected, and it takes a while for me to rouse his life story that, like most stories these days, lies buried beneath layers of pandemic doom and gloom.  “What is it you want to talk about? Why?” he wants to know straight up, apparently surprised that anybody should wish to go rummaging through his past.

But the past comes streaming back as I invite Fred to indulge my curiosity about the early days in Cape Town when there were still fish in the sea and boatbuilding was mostly an inconvenient noise in somebody’s back garden. Fred is 1000km away but the telephone line is taught with nostalgia as he describes the lessons he learnt from his coachbuilder dad, who as much as he liked building boats did not much enjoy playing with them. “He couldn’t handle the sea – he got very seasick,” chuckles Fred. “So I ended up owning the boat and sailing it. I was about 14 when I started taking people out on trips, fishing in False Bay. Kabeljou and Geelbeck. That is when I learnt a lot about boats. It was a good time of my life.”

While the first family boat was built as per written instructions – Fred’s dad had bought a DIY book – the next phase was all trial and error. Fred matriculated and started work at the post office where he received in-service training and qualified as a technician. Thus began a double life of postal service during the week, boatbuilding over weekends. “We would start work on the Friday and finish by Sunday. From that I learned fibre glass skills,” explains Fred, who discovered his technical skills had broad application. Some of his first ever boats were a small ski boat used for water skiing, and a buccaneer sailing boat for class sailing.  Recalls Fred: “That sailing boat put you right down in the water, and with the south easters in the bay it was how I learned my racing skills.”

At the time Fred was also building houses, all the while earning income that would help equip him for the next phase of his building career – full time boatbuilding.

A big turning point was a timely commission to build a deck for one of his building clients. He took a mould from the hull he was working on, which formed the basis for his sideline business.

“The boatbuilding industry had just started then and I was still building houses, but then I decided I would just build boats,” Fred recalls with obvious satisfaction. “I got a very good design from the US called a Peterson 33 (33ft monohull). I built quite a few monohulls, including a Montevideo 43 which was my own design. I learned a lot from those and that helped a lot.”

By now Fred had a busy factory in Brackenfell, working as Fred Scholtz Marine. But fate dealt another wildcard in the form of a request to build a fibre glass mould for a 47ft Angelo Lavranis design. “I said fine, but I want one hull for myself.” 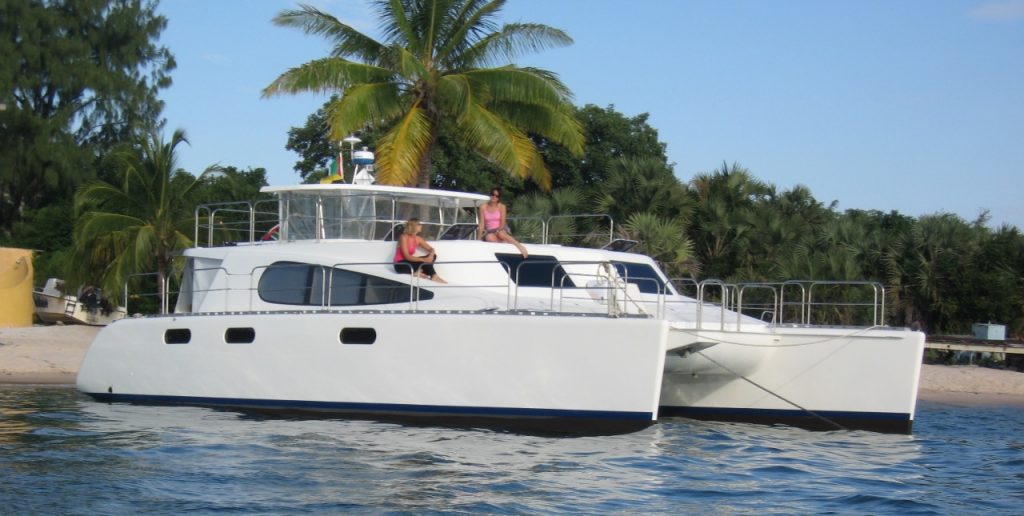 That hull took pride of place in Fred’s backyard, marking an adventurous new phase in Fred’s boating career – cruising.  Two weeks after it was launched he and two of his children set off on a journey that would last several months. They spent two months in Rio and then along the Brazilian coast and across to the Caribbean. It was Fred’s first real exposure to the anthropological highs and lows of the cruising lifestyle, and he recounts the surprising reception he received in Brazil. “We had quite a big boat and they all thought we were rich. Meanwhile we were broke most of the time.”

Fred was a willing convert to catamarans, and found himself pitched into the cat frenzy that gathered pace in the 90s. He built a 47ft  Alex Simonis design, and about that time built himself one too. Now divorced, he launched the boat and sailed off to Mozambique for his next life phase – luxury yacht charter. “Most of the time I was in Queliman doing fishing charters,” says Fred of that time. “The boat could take six guests and our customers generally loved fishing.”

As one of the early pioneers in Mozambican waters he had access to pristine locations, such as a deep water pinnacle where he and his clients caught massive fish. “We found a spot where nobody else had been,” he says dreamily, his voice conjuring images of azure waters and bikinis.  “We would put an anchor on the pinnacle and anchor there for the night.”

From Mozambique he sailed across to Nosy Be in Madagascar, staying there for about a year before ‘retirement’. He sold his boat there and flew back home. “And that was the end of my story,” concludes Fred, with just a hint of an untold story wafting in the ether.

Now in the Eastern Cape he still dabbles in boats, such as a recent interior on a 30ft monohull. But Fred has other interests these days, such as developing a wind turbine which he says will produce enough electricity to run a household.  “Here I am in the Sundays River,” he chuckles, mindful of the distance he has come.

Fred may live downstream these days but one suspects he has a few rivets left in his workshop before he drifts out to sea.