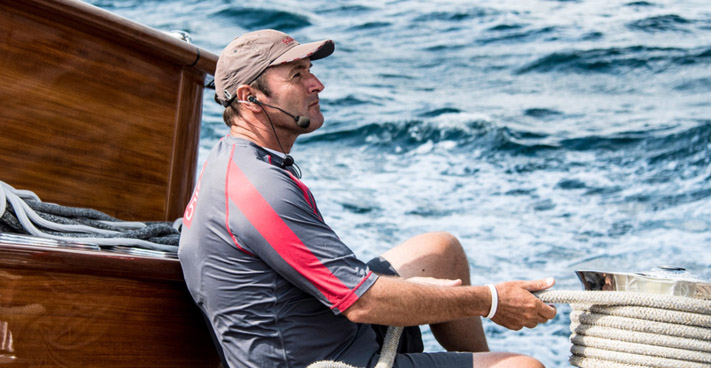 SA Sailing’s very own Mr ‘Can Do’ doesn’t want to leave anything undone. 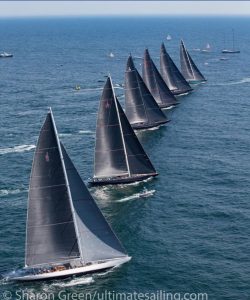 If seagulls could talk they would probably want to know about Mike Giles.

They would ask us why the man has spent so much time sliding across the sea, for no apparent reason.  Not chasing fish nor fish guts; not going anywhere in particular.

What’s he doing out there chasing the wind, in his sun hat and slip slops?

The answer lies partly just to the north of Port Elizabeth, in the tidal waters of the Swartkops estuary where Giles grew up. These sailing-friendly waters proved the perfect incubator for a storied sailing career that has done more to promote the SA leisure boating sector than almost any other. From lasers to 80ft keelboats, from Shosholoza to the Cape 31, Giles has set the pace in most sailing endeavours since he was a lightie messing around in the shallows of the Eastern Cape.

“I was very lucky that I grew up on the banks of a tidal estuary,” says Giles of his upbringing spent sailing everything from windsurfers to dabchicks. “My father used to run a small sailing school from the Swartkops Yacht Club. It was a safe sailing environment. You have the boundaries of the sandbanks, it is not in the open ocean, and it doesn’t matter what the wind is doing – you can always get home safely.” 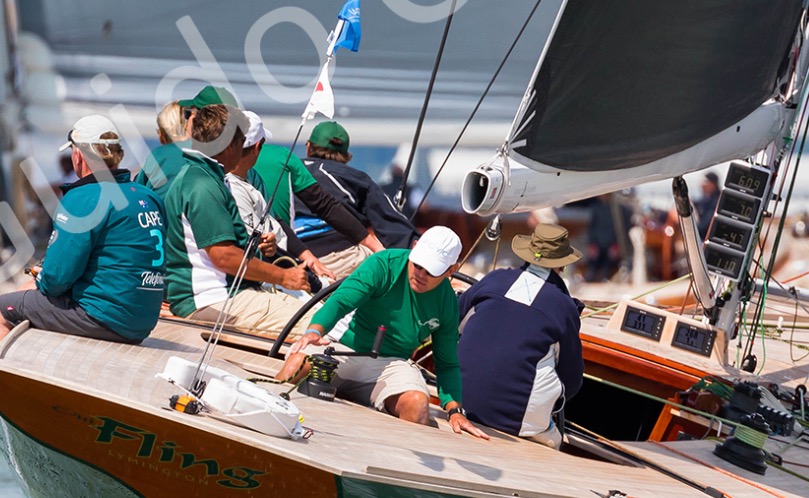 Giles also credits his father Vaughan, who ran a full time business when he wasn’t at the sail school, and two elder siblings for actively encouraging his love of sailing and the ocean. As a result water sports for him became second nature, as did basic navigational skills that quickly became more sophisticated the more he was able to compete. Explains Giles: “You start in your own little area, your own bubble, then start competing and might go down to Swartvlei (outside Sedgefield), then go to national, and then bigger.”

Each step up was an opportunity for growth and learning.

With hindsight Giles also recognises how social networking during this time effectively set the stage for his future career. Friends and acquaintances made during sailing events have, like him, evolved into key stakeholders in global sailing. Says Giles: “It sounds weird but those connections you make at a young age are the same people you keep on seeing in the sailing world today – now they are in the field of the top races, the Volvo and the America’s Cup.”

“You should take any opportunity you can get to go and mix and be among really good competitors, because it is all about networking skill. You might not see the benefit immediately but you will definitely see it down the line.”

For Giles the networking continued right through high school and university, and even during his military conscription when he was lucky enough to be posted to Saldanha. Sailing continued to be the mainstay of his life. 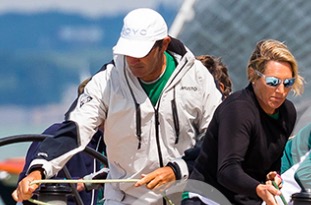 While studying for a BSc in construction project management at the University of Port Elizabeth he coached the young South African Optimist team for the 1995 World Championships in Mariehamn, Finland.

After obtaining his degree he opted to travel overseas and seek out sailing opportunities, specifically laser sailing. “I wasn’t doing it to make money out of it,” says Giles. “It was kind of like having a gap year and trying to make the most of opportunities that came along the way, whether round the world races – whatever. I was pretty focused. I wanted to sail.”

And so sail he did, lasers mostly, but much bigger boats too.

His mission to be top of his field was buoyed by the laser’s admission as an Olympic class sport, prompting fierce global competition. While this created many more opportunities it also turned Giles into a partial sailing refugee, compelled to keep travelling the world in order to keep up with the pack. At the same time there was the niggling business of making a living beyond what he could earn sailing keel boats. This required jumping into work projects along the way, whenever required. “You might have several jobs at the same time – you have to make a plan, “Giles recalls. “The downside is that your sailing is compromised a little bit – you want to go full time but you can’t because you have to break even, get cash and at some point your learning curve will be flatter. You just do the best you can.” 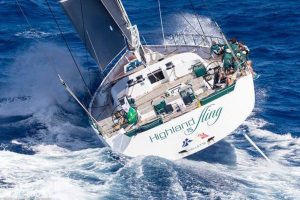 In his case this translated to regular seasonal migrations, from the States to Europe for the summer sailing season, to Australia /New Zealand in November December, and back home in between. Giles clocked as many air miles as sea miles. Although he just missed qualification for South Africa’s Olympic team, he established himself among the world’s sailing elite and, via an American contact, soon found himself diving into the boatbuilding sector – a landmark project to build two performance cruising catamarans in Cape Town with Harvey Yachts. At the time Giles had no idea the project was a prelude to the painful Gunboat episode; his role was to work on the specification list for the first two boats and source the necessary material from around the world. “They were happy to have me on board on a full-time basis and I was happy to settle in Cape Town.” 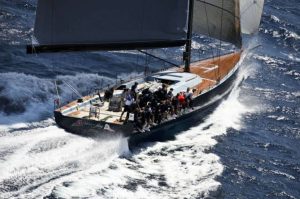 He says the boats themselves were a huge success and he has fond memories of launching a world class product: “It was a global project, a really nice journey,” he explains, adding that the initial success prompted US businessman Peter Johnstone to found the Gunboat Company with an impressive order book.  Although Giles was not involved with the Gunboat company, which filed for bankruptcy in 2015, he says the saga unfolded like a cautionary tale for other industry stakeholders: “It is just unfortunate that they got caught on the wrong side of an exchange rate curve – the strengthening of the South African Rand.”

From Cape Town Giles moved to Valencia, Spain, to form part of the now-famous Team Shosholoza, SA’s inaugural America’s Cup crew. It was yet another step up in yet another dimension of sailing, a three-year stint that stands out as one of the highlights of Giles’s career: “It was just an amazing thing. I don’t think I realised the benefit of doing that until afterwards.” 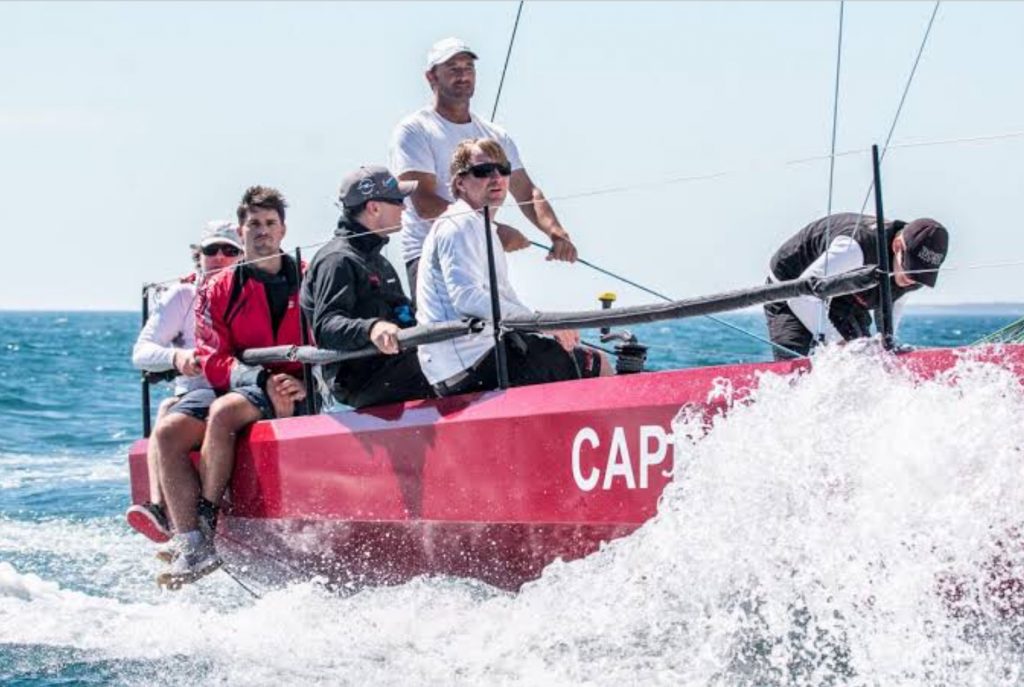 Giles says the Shosholoza campaign was to SA sailing what Mandela’s release from jail was to the democracy – a moment to savour. Not only did South Africa punch above its weight against the world’s best, the opportunity to sail on the biggest stage opened doors for all involved. For Giles it meant an invitation to work as part of the team Telefónica in the Volvo race, helping to reconfigure the boat. “Another amazing journey,” says Giles with a wistful tone.

The experience stood him in good stead a few years down the line when asked to step in to help another Volvo Race yacht, Pirates of the Caribbean, which needed a repair job in Cape Town. Giles was able to draw on his networking and industry skills to get the job done. Says Giles: “The structure of their boat was compromised and I was asked to step in, to get it to Cape Town. It was cool then to be on the logistics side.” In typical can-do fashion Giles cast the net wide to source the services he needed: Antonov Airlines, a trucking company, Pescanova which built a makeshift facility to accommodate the vessel: “Then it was about using contacts of project management from stuff I had done before in Cape Town. Every single Volvo ocean race thereafter I would get involved with a team to help with logistics.” 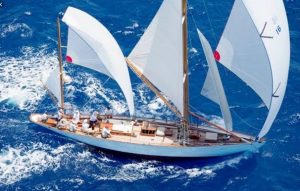 No surprise therefore that Giles emerged as a key figure in Irvine Laidlaw’s Cape 31 project, another success story for SA sailing. Giles is quick to credit Laidlaw’s visionary role in the key concept of a fun boat that could “get some of the youngsters back into keelboats”. The project has since expanded and looks set to make a global impact. 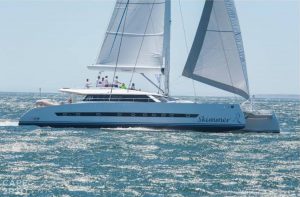 Through it all Giles has proved his credentials as the ‘guy who can get it all done’, an aura that has followed him from the Swartkops estuary to most of the world’s sailing hotspots. His ongoing success is as much about versatility, so evident in his sailing as well as in project management, as it is about his holistic approach to whatever the job at hand.

He now splits his time between professional sailing, worldwide logistics and project management.

Regarding the future he sees sailing forming an integral part of the local tourism trade. A flotilla of boats is worth a small fortune in hotel stays and restaurant meals; why not work together to maximise the destination?

Maybe just like the seagulls it is all those sea miles that allow Giles to see over the horizon.