Fisher is a busy man. He is also an interesting man.  SABBEX talked to him about his past, present and future. 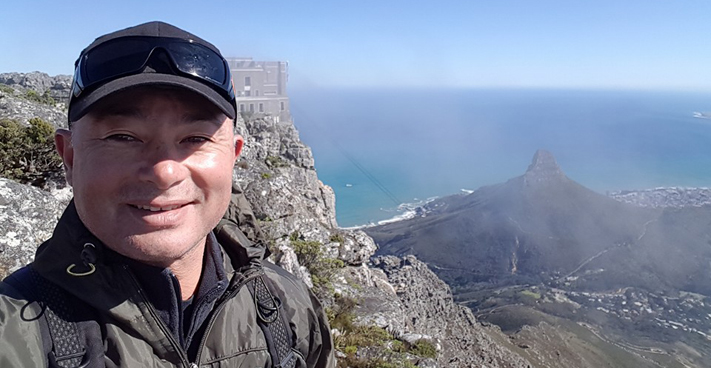 SABBEX: Tell us a bit about your early life.

JF: My father is from Japan and came to South Africa for business purposes. My mother was a white South African. In the old days of Apartheid that wasn’t a good place to be – we weren’t accepted by either community. I am the oldest of 2 sisters and one brother. I have 3 children.

At one stage my mother was booted out of her house (because she now had a coloured family).  We then lived in District Six until we were forcibly removed.

My mother didn’t want to move back with my father to Japan – she said she can’t go there — and we haven’t seen him since I was about eight.

JF: The only schools that would accept us were Catholic schools. Things were tight, we were on welfare, and so I was sent first to Nazareth House and then to Salesian Boys Hostel (shelter for vulnerable youth). I would stay there and go out to school. It is quite ironic because although I was first classified as coloured, my mother got us classified as white. Which meant as soon as I finished matric I was called up to the army.

I remember when I got the base at Zeerust the korporaal took one look at me and said: “Wat maak jy hierso? Die weermag is vir wit mense” (What are you doing here? The army is for white people) 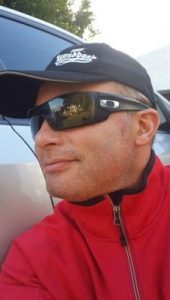 After that I was transferred to the Navy and joined MCM (mine countermeasures). I worked my way up through the ranks to Chief Petty Officer (CPO), and served as an instructor at the maritime warfare school.  I was there for four years and then went back to sea. The navy was busy acquiring new vessels; I signed up for the Corvette programme and went to Germany for a year, based in Kiel. Two of our Corvettes were built there.

We commissioned the boat there (SAS Mendi) and passed the Germany Navy test. They basically put you in the Baltic Sea for a  week and throw scenarios at you, with the German Navy on board. Then they have a debriefing session to see what you did right (or wrong). They throw you in the deep end, and it was a great learning curve.  Once we passed there the boat was stamped and approved to leave for South Africa.

SABBEX: Do you feel your navy experience was beneficial in light of your future career?

JF: The navy was where I got more au fait with docking, using dry docks and synchro lifts. I even did some yacht sailing in the navy. My time on a minesweeper taught me a lot of seamanship skills, such as handling of ropes. There I learnt a lot, such as skills for mooring ships – which now helps me when dealing with large superyachts.

JF: I got an opportunity to join a labour broker firm. They had a lot of government contractors and supplied a lot of staff.  It is where I learnt a lot about the CCMA (Commission for Conciliation, Mediation and Arbitration) and disciplinary matters. That taught me a lot about the labour market. I worked there for eight years and got to understand collective bargaining. That experience assisted me when I started at the Royal Cape Yacht Club, which was unionised.  Because I had that experience with the labour market I could put steps in place to benefit staff – acceptable working hours and that kind of thing. This was the reason I started my law degree but only did three years of it.

SABBEX: Tell us more about your switch to become RCYC marina manager? How did that come about?

JF: I was extremely depressed working in my previous job (labour broker) and was struggling to find another job. I applied for the RCYC job after I saw an advert in the job finder in the Cape Times. I submitted my CV and got a call from the general manager.

When I went for my first interview, the general manager was my former officer on the SAS Mendi, Marcus Reuter.  I didn’t recognise the voice until he introduced himself.

A month later I got a call for a second interview and then I got the position. It was a relief because I was so hungry to get back to the sector that I love (marine).

SABBEX: Where you worried about taking on the job?

JF: No I never had any concerns because I was very eager to learn and not scared to ask. I did have a mentor in (outgoing marina manager) Neville Norton. He helped me get an understanding about how the whole system works there.

During my time I tried to make more space for bigger yachts – the space is very tight and wind conditions very bad.  That marina is on chains, not on pylons.

What was important to me at that time was to try and accommodate as many vessels as possible to boost the Club’s income. Being a marina manager you see what generates the income, and the biggest income generators are the hard, the slipway, and visiting vessels.

SABBEX: And then from there to the V&A marina? How did that come about?

JF: The V&A harbour master Steven Bentley used to come to my office at the RCYC to discuss boats – general talks about marinas and yachts. One day he came for a cup of tea and asked me what I thought about the V&A.  I told him I was not too au fait with it, particularly with regards to the V&A development plans and intentions.  He asked if I would be keen to join the V&A team.

I told him I was extremely happy at RCYC. But two months later he spoke to me again and asked me to come for a meeting with his executives to hear about the V&A’s plans.

Andre (Blaine) met me for coffee and told me about what they want to see the marina become, and what the ocean economy means to the V&A Waterfront.  That got my ear. Then I asked Andre what my role would be, and it seemed like a progressive role.

It was strange because up until then I always thought the RCYC would be where I would retire.

SABBEX: And how is it going at the V&A?  How has it been?

JF: Andre is a great boss to have, and Steven Bentley ha

s a plethora of knowledge when it comes to the water. There are different silos within the Waterfront and I fall under marine industrial, the same as the cruise line terminal.

Right now a big priority is looking at our current water footprint and trying to maximise it. We are in the planning phase. V&A wishes to extend its waterfront footprint to cater for superyachts, other vessels and events.

SABBEX: What about boatbuilding?  How does that fit in with V&A plans?

JF: Boat builders are important stakeholders. This is why Andre and I had a meeting and came up with a recommendation to try and give back to the boatbuilding community by reducing the (berthing) rates proportionally amongst the different boat builders based on how many boats they bring us. That didn’t come from a place of wanting to attract more boat builders; it was because we already had Phoenix, Two Oceans, Tui, Robertson & Caine – they are already coming to us because they know it is a safe haven for their boats. A lot of guys want to come to the boats here because it is pristine. That is one of the things we are trying to do: create a water space for these boat builders for them to commission their boats.

SABBEX: Is it difficult to juggle all the different responsibilities and marina stakeholders, as well as the adjoining residents?

JF: What the Waterfront did many years ago was to sell ten year leases so that they could get boats in. That is how they tried to get marina off the ground. It means luckily we now have our long term and short term tenants. We have the boatbuilding companies that park here and the cruising fraternity, at different times of the year. Currently all these work so that the marina is seldom empty. We have that fine tuned machine working very much in our favour so that we can accommodate everybody.

We try to keep everybody calm. What is important is that the marina needs to work and it is important to keep that balance going. We need to cater for everybody but also make sure that people don’t break rules — like drilling at 6am.

This is a very busy portfolio. It never stops and one has to deal with everybody from mechanics, sail makers, skippers, crews, superyacht owners, and all the V&A’s tenants and tourists. We have so many different role players. It is a combination of so many different entities that speaks to employment and training. It speaks to the value of this piece of water, and speaks to marina real estate being so valuable.