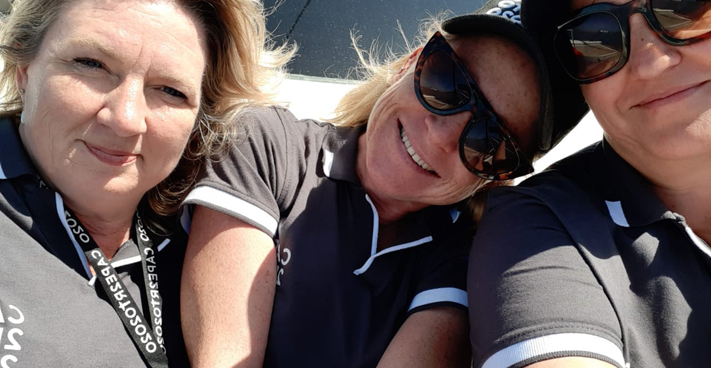 SABBEX goes behind the scenes as to what administering the race was all about.

Congrats on a wonderful race. Was it the result you expected?

Thank you but it was a HUGE team effort. I couldn’t have accomplished everything that needed doing from my side without the help of Kerry, Hilary and the entire race committee.

The results in terms of the finish was anyone’s call, the ‘drag-race’ between the trimarans was very exciting but it was more interesting for me to see how the smaller boats performed thanks to the ORC handicaps which leveled the playing field.

For me the most exciting outcome of this year’s race was the adoption by many of the fleet of the #SAIL4GOOD campaign. We encouraged each competitor to nominate a cause to sail for and this was embraced by most of the fleet.

Ciao Bella – JM BUSHA 54 Sailing Team were sailing for Peace in Africa, Indulgence opted to support the NSRI and have collected almost R20000 through their Back-a-Buddy campaign,  Almagores II were supporting the Southern Wind Shipyard’s charity, the Theodora Foundation.

Then of course there was Phil Wade and his Marine Inspirations that joined forces with Saravah, the Brazilian entry.

Tam Tam was sailing in support of CANSA (the Cancer Association of South Africa), Love Water were sailing for the World Wildlife Fund and Umoya through their “Save-our-Soles” initiative challenged fellow competitors to make eco-bricks on their voyages and have raised awareness of eco-bricks to the extent where they are now being adopted in Rio.

Was this your first time as Race Administrator? Were you apprehensive at first? Were you expecting this?

I’ve administered 2 Mossel Bay Races and 2 Spring Regattas (2017 & 2018 for both) but this was an exceptional challenge. I wasn’t apprehensive given that I have an administrative background, but the scale of the race was daunting. Thanks to my previous experience, I anticipated that dealing with the competitors is always similar to herding cats, but the other aspects of the race such as the on-shore events and entertainment, the media, marketing and logistics and the sheer amount of paperwork in general was astounding.

For those of us who know next-to-nothing about the world of ocean racing, what is the single-biggest challenge when preparing for a race of this stature?

From the perspective of someone at the coalface, and looking from the outside in, I think that the general perception of “preparation” is just making sure that the boat is ready. There are checklists and scrutineering done prior to the start to ensure that all the boxes have been ticked in terms of safety.

However, through dealing with the crews and skippers, I can tell you that the most important aspect is having the right mental attitude. Many of the crews doing it for the first time I don’t think anticipated what it would be like to spend 3 weeks in a confined space with the challenges of weather, breakages and watches that result in disruptions to your normal sleep patterns.

Where do I start?! Every entry was different and there were very few that didn’t give me at least one grey hair. Before the start we had down-to-the-wire crew changes, Maserati had a mechanical issue and only made it to the start line with seconds to spare, we had some comms issues with one or two of the vessels during the race where we had to resort to sms reporting, and the list goes on, but overall we had no stand out calamities.

The most difficult challenge of the entire race was with the sub-tropical storm Kurumi which developed off Rio as the fleet was approaching. We sent out three weather advisories and the tracking rate was escalated in order to monitor the fleet.

What did your team look like? Did you get good support?

I couldn’t have asked for a better team – the RCYC Sailing Office in Hilary and Kerry were amazing in helping with not only organizing the on-water management but also the shoreside entertainment. Toni Mainprize, RCYC’s General Manager, assisted with race admin in 2014 and 2017 was a mine of information and I couldn’t have done this without her. The RCYC Commodore and flag officers were also very supportive and Luke Scott, the Race Chairman provided important oversight.

Weather? Did it behave?

Of course not. In past editions of the race, the competitors anticipate some reasonably challenging weather leaving Cape Town for the first few days and then glorious downwind sailing once they turn left. The approach into Rio from the North has also been known to be demanding but still reasonably “smooth sailing”.

This year the weather gods turned everything on its head with just about no wind for the first start fleet for 6 days after their departure from Cape Town and then just as the second fleet were catching up to them, they found some wind but spent the next few weeks dodging high pressure systems all along the way. Just as they were nearing Rio, Sub-Tropical storm Kurumi developed which proved very grueling for some of the competitors.

The Zulu Girl team was a great human-interest story. Were their any other stories from the fleet that caught attention?

For me the highlight of the entire project were the daily comments and feedback from the fleet. The anecdotes and commentaries were phenomenal. From Adriana’s comment that a corkscrew should be put on the list of essential equipment, to Pierre Albertyn’s (Myrtle of Bonnievale) daily insights on how to live on board a catamaran that sounds like a steam train were very entertaining.

The best story of the entire race though came through a comment made by Almagores II in one of their daily reports that the person on watch had thought they’d seen a UFO. The day after this was published, a SAA pilot who does the route from Sao Paulo to Johannesburg contacted me and said that he’d been following the race and had plotted the fleet and had flown over Love Water and later that evening over Almagores II. He’d flashed various lights and given the timings we solved the mystery of the UFO sighting!

How has the Race evolved over the years in terms of technology and participation?

After the start, I took a weekend off to visit my parents. On the drive to Knysna I received a phone call from Mojie asking for some information (I can’t remember what now) but it was a mind-blowing realization after I hung up that I’d just been in a car, chatting to someone out in the middle of the Atlantic Ocean! Technology has come a LONG way!

Besides the comms, the Yellow Brick tracking was phenomenal. Being able to request adjustment of the “ping” rates during the storm to monitor the fleet and for the spectators as well being able to follow their team’s progress was tremendous.

This year we also offered spectators the ability to sail a virtual race on the Virtual Regattas platform on which we had over 50000 competitors register. Needless to say, I was too busy some of the days to keep watch and my course was definitely not what it should have been, although I did arrive before the last of the actual fleet…

Were there lighter moments? Was it fun, or just hard work? Will there be a next time?

The best part of administering the race was getting to know the crews. Meeting people from all over the world and of course meeting up with the people that I knew from other races or from within the sailing industry. I got a huge kick out of being able to help whoever needed assistance, like Jasper from Tam Tam for example, who needed a sail repaired on the 3rd of January when everything was closed and I could call in the network.

The most difficult part of the job was working flat-out, full days while friends and family were on holiday. As for the next time…watch this space.

Time for a holiday?

No, Unfortunately. No rest for the wicked.

I’m back in the hot-seat doing a brand-new website project, updates are well overdue on the Boating South Africa website thanks to Thina for collecting all the new members info over the past few weeks. I’m also busy re-branding and planning a new marketing strategy for my web design business having just taken a new person on board and I need to complete my Diploma in Digital Marketing which was shelved in November when things became a bit too hectic.

It’s going to be a great year!