FACE OF THE FUTURE:  BOATING WORLD SA GIVES YOUNGSTERS A FOOT IN THE DOOR 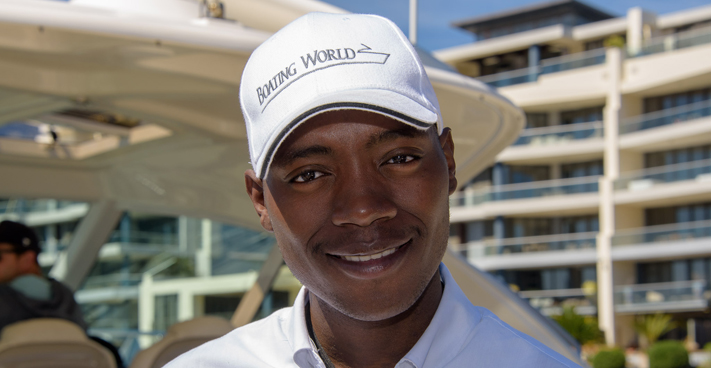 You don’t have to sell boats to spot a buyer, student tells SABBEX

Nkosinathi Mhlanga is a fast learner.

He knows, for instance, that a man wearing slip slops and old high school rugby shorts is more likely to buy a R20-million yacht than is the fancy pants with ten grand shades.  “You don’t underestimate anybody who comes in,” Nkosinathi says, keeping an eye on the latest visitor to the galley of the S53 luxury motor yacht where we are seated. “Just a guy with flops and glasses, that could be a buyer. You don’t judge them. You must treat everybody equally.”

Nkosinathi also knows that a serious buyer is likely to ask sensible questions about the engine or vessel specs, rather than pose for selfies on the prow. “Sometimes you see that a person has a background knowledge of a boat, or sometimes they actually just tell you they are interested in buying,” says Nkosinathi, smiling at the thought of it.

Personable and cheery, Nkosinathi is soaking up all he can in preparation for a career in tourism or hospitality. He was one of three youngsters chosen to work with Boating World SA at this year’s Cape Town Boat Show, and it is easy to see why the eager 25-year-old student has caught the eye of Suzanne and Derrick Levy.  Currently studying hospitality management in Granger Bay Hotel School he has already obtained a M4 tourism qualification and can now add a stint at the Boat Show to his CV. “Suzanne (Levy) approached our school and said she is looking for people who can express themselves – I was one of those chosen,” he beams, exuding a quiet confidence not out of place aboard the S53.

Not only is Nkosinathi hungry to learn, he is entrepreneurial, an attitude he believes he may have inherited from a family member back in St Lucia in KwaZulu-Natal. “My mom is from that side and my uncle was a big motivation to me. He has given me so much, and said I can go back when I am finished my studies – so that was always the plan from the beginning.”

Nkosinathi is also motivated by the need to help provide for his 12-year-old sister, particularly since the death of their mother last year. His father is estranged from the family

But Nkosinathi is clearly more energised by the future than the past, and says he has enjoyed broadening his horizons with the Levys. “I had no experience (in boating) – nothing,” he chuckles when asked how much he knew about the sector before joining the sales team. “I have gained so much experience,” he says, adding that his strategy was to listen carefully to other members of the sales team when they interacted with clients: “Whenever that person is answering, I’m listening.  Then next time I answer the exact same thing.”

He says he is also heartened to see more black people accessing the historically white leisure boating scene. He admits the luxury was surprising at first, particularly from the perspective of somebody brought up in Pinetown. However is also not one to be intimidated; he says he would like to launch overnight boat charters that could give more people a taste of life aboard a luxury boat.  “There is a lot of money in this market and is it definitely something I wouldn’t mind doing. There are quite a few black people now who own boats now that we all get equal opportunity.  I can’t blame a white person if I don’t have a boat.”

“Things are changing,” Nkosinathi says in conclusion, his eye picking out a new visitor in the saloon.

As I leave I notice he is looking at my mismatched socks – a dead giveaway. No sale here.  I take a selfie and slink away.

2019-11-09
Previous Post: Boats, Boerewors and Bokke: Expanded Cape Town International Boat Show Gets Thumbs Up from Key Stakeholders
Next Post: A WORD FROM SABBEX BOARD MEMBER LINDANI MCHUNU ABOUT THE ANNAPOLIS BOAT SHOW