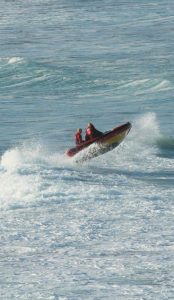 The 4,2m GRP composite Sea Ranger is a cross-breed of two popular existing craft – the RIB (Rigid Inflatable Boat) and the PWC (Personal Watercraft). The concept grew out of a jet rib project for a Mauritian client, and will be introduced by the NSRI as existing craft come up for replacement. The first batch has been ordered and will be deployed at several NSRI stations before the summer season begins.

The vessel is the culmination of a four-year development joint venture between Admiral and Droomers Yamaha, who believe the design could have a major impact on the global marketplace.

“The Sea Ranger is a perfect combination of RIB and PWC in one incredibly capable package,” the companies said in a joint statement. “With the fully-in-tact jet powered PWC bonded to a partial RIB hull and tube, the original integrity is unaffected. This is a big plus.”

“Taking the best of both worlds and putting them together in an innovative way that does not compromise either’s original benefits, has resulted in a craft that is unequalled in the Surf Rescue role,” the statement said.

Admiral MD Alan Geeling told SABBEX the Sea Ranger resolved a long-standing rescue conundrum: how to achieve high-speed manoeuvrability in the surf zone without the safety risk posed by outboard engines or hard hulls.  The new design allows rescue crews to get out to the backline even in the worst conditions, Geeling said: “The biggest problem now is that after you get used to this boat it is difficult for anybody to go back to jet skis or ribs,” he said. 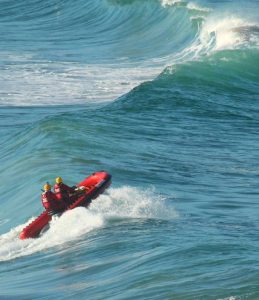 In addition to sea rescue the Sea Ranger was a boon to recreational fishing due to its greater stability compared with a normal jet ski: “Fishing is a big market for us because fishermen are already kitting out jet skis and going out to catch game fish. This will be a better alternative for them, not only because it is more stable but because you can take someone with you. But it is still the same jet ski, with the same trailer and format,” Geeling said.

The joint venture grew out of a commission to supply a Mauritian client with 25 hybrid jet ribs, which involved cannabilising jet ski parts and inserting them into a purpose-built hard-bottomed RIB. Said Geeling: “Through that project we learnt a lot about small jet boats and all the issues. We thought there has to be a better way of doing things.”

“We thought why not take a jet ski untouched and bond on the semi-hull. We thought that was a good idea,” he said.

The concept gained traction after an initial prototype, which gained further momentum after the NSRI came on board last year. “They (the NSRI) made some suggestions and we came back to the factory and spent the next three months changing the tooling, and then we made the second prototype version. The NSRI trialled it in Blouberg and they were just thrilled,” he added.

Geeling sees a further business avenue in retro-fitting existing jet skis, thereby allowing owners the added Sea Ranger benefit: “The idea is you bring your jet ski and we will fit the partial hull tube – and you take away a boat. But that is more long term.”

Currently they can do the EX and VX models from Yamaha and plan to increase the range in future.