LOOKING SHARP:  THE MARKETING MAN BEHIND THE CAPE 31

LOOKING SHARP:  THE MARKETING MAN BEHIND THE CAPE 31 SPEAKS TO SABBEX ABOUT THE SOUTH AFRICA’S NEW KEELBOAT SENSATION

2) The Cape 31 project seems to be going from strength to strength despite difficult economic conditions. How does explain this success?
The Cape 31 is an enormously successful boat and suitable for the conditions that we experience here in the Cape. Mark Mills has delved deeply into the research for the boat which is sailable virtually anywhere in the world. For areas that are plagued by predominately light airs, we have the option of increasing the sail areas, and this obviously for boats that will be racing under ORC or IRC handicaps. For Class racing there is a standard sail area that one needs to fit into and of course the agreed upon panelled sails that we are using here to keep the costs down. For handicap boats racing elsewhere they can use 3Di sails for example — but they do come at a cost — so for the Class they have decided to reign it in to keep the costs down and make the overall boat more affordable across the board. With regards to the “difficult economic conditions” you mention, indeed we do find ourselves in tight times, but serious buyers seem to always make a plan! The max weight rule allows for normally seven crew which makes it much easier to find crew as opposed to a boat demanding 16 or more. The exhilarating ride onboard these boats off the breeze makes it a very attractive option and a reasonable price.

3) My understanding is that Lord Irvine Laidlaw provided the initial impetus. How important was his involvement and are there others who need to be acknowledged?
Lord Laidlaw was indeed the brainchild of the Cape 31 and involved a few outstanding local sailors to contribute to the design of the boat. Mark Mills embraced the concept and came up with the Cape 31. The likes of Mike Giles, Hylton Hale, Paul Standbridge and Geoff Meek were involved from the outset and have been instrumental in getting the class going.

4) Uwe Jaspersen is building the boats. A natural fit, given his expertise in composites? Uwe is by far the most appropriate boat builder for this class. His understanding of “getting it right” is key for a Class boat. He weighs everything that goes into the boat and all the boats are within a couple of kilos of each other. He has been building in composites for as long as I can remember and his race boat build knowledge is unsurpassed in this country. A great fit for the team.

5) I believe there have been some foreign buyers, including Francois Kuttel.  Do you foresee more offshore sales?
We have also sold a boat into the UK to expat Mike Bartholomew, of the Tokolosh fame, who has been campaigning in the UK for years – so his switch to the Cape 31 is very encouraging for us as he is a force to be reckoned with in the Hamble and people listen to him. When they see his Cape 31 blasting all over the Solent we hope to see a flurry of UK orders! We are also currently exploring opportunities in Canada, the Caribbean, Australia, New Zealand and the Baltic. So, yes, our vision is definitely to see more offshore sales. Having said that we are keen to see more local owners step up and grow the class further here. To watch 10 or more of these boats in action in a brisk South Easter is a sight to behold never mind the exhilarating experience for the guys and girls onboard! 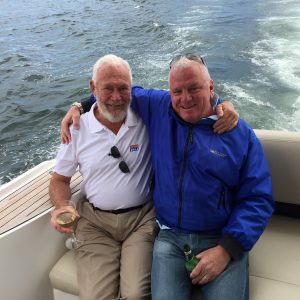 6) Abromowitz and Sharp is a key broker in this part of the world. How does this project fit in with the company’s vision for SA’s boating industry?
We embraced the opportunity afforded to us by Hylton and Uwe and saw it as a perfect fit for the sailboat side of our business. The South African boatbuilding industry is predominantly made up of Catamaran builders, and the monohull guys have all come and gone so to speak. (aside from Southern Wind Shipyard who are in a different league). Our relationship with the industry is close and goes back to 1976 when David started Central Boating, set up Keith Bellamy in the Mast Business and Geoff Meek in the sails business. I was involved for 22 years supplying all the yards, so we have a close affiliation to the industry here. For us we would love to see the Cape 31 Class grow here and for international sales to increase. We have put a lot of effort into the international sales side and are already working closely with a network of dealers.

7) Is the current economic ‘calm’ a serious challenge for future growth of sailing in general and the Cape 31 class in particular?
Undoubtedly, this is our biggest concern for the sport of sailing and the general wellbeing of the industry as a whole. The weak Rand helps a bit for the foreign guys but the local costs are spiralling and in some cases outweigh the rate of exchange. The builders get more Rands for their export orders but have to pay more Rands for the imported equipment, so generally no gains there. But where there are gains to be made is where you get more Rands for the $ and in theory your local costs stay steady, but as mentioned the volatility of the likes of Eskom and their one way trend for cost of electricity, labour disputes over wages, the threat of load shedding when the demand increases, makes it extremely difficult to remain on the right side of the balance sheet. Having said that, the class is already strong and hopefully will grow both here and offshore.

8) The Lipton Cup / Cape 31 marriage is surely a tonic for future growth; do you foresee other races following suit?
The appointment of the Cape 31 as the Lipton boat was a breakthrough not only for the class but for sailing in general. The outdated L26 was long overdue for a replacement and we saw the Lipton Cup dissolving into a development/school kids regatta when in the past the Cup attracted SA’s top sailors year in and year out. The L26 for sure played its part but like everything there is a time to move on. This year saw an emergence of many old faces and was so encouraging for the sport in general. The fact that these boats are fast and furious made it interesting when the “old school” guys were up against the fitter younger guys, and in fact the proof was in the results with Mike Hayton and David Rae taking the Cup with a team of young(ish) guys!!! Having said that the elder statesman are not put off by the physicality of these boats as the exhilaration both on and off the breeze outweighs the odd knocks and stiffness the next morning. It was a brilliant breakthrough for the inclusion of the Cape 31 as the Lipton Cup boat and the naysayers have hopefully eaten their words. Lipton Cup is the only keel boat class regatta sailed here so other races will not follow suit. The Cape 31 Class is strong and well managed and they have a healthy calendar of races with an annual invitational whereby we attract overseas guys to come here and race and then experience our lovely country. When there are not enough Cape 31’s in a particular regatta they sail under handicap and the rating is pretty handy anyway, so in reality a true all rounder on the race course on and off the breeze and in class or handicap racing.

9) Are there any other exciting projects you’re busy with?  (something along those lines).
We are currently busy with a few deals and have been busy throughout the winter which we are very grateful for. The world is generally in a mess but somehow the guys that are involved in our sport always seem to find the time and the requisite financial commitment to stay afloat!

2019-09-05
Previous Post: Abromowitz-Sharp Signs With Uwe Jaspersen to Spearhead Cape 31 Sales and Marketing
Next Post: Famous Motor Yacht Named After a Horse to be Restored in Saldanha