SA Boatbuilders Launch into the Digital Ocean: The Rise of the Open Ocean Vlogger

If you see a cop behind a camera it is usually too late – you’ve run a speed trap. 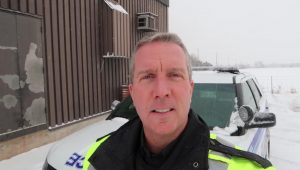 But if you see an officer in his socks on the prow of a swanky catamaran then it has to be Craig Bowman, and you’re going to be OK.  The well-known sailing vlogger and smiling face of Youtube channel Cruising Off-Duty is about as threatening as an unopened Windhoek Lager, which is what he offers me as we sit down for a chat in the V&A marina.   I have come to find out how a man with 25 years police service, including eight as a Fatal Motor Vehicle collision Investigator, can blossom into a social media sensation who commands attention from some of the world’s top boat builders.

More importantly, can he teach me how to do it?

To be fair Bowman is more of a sailor these days than a cop, with only four years left in Canadian law enforcement before he swaps his squad car for something more trans-Atlantic.  His career highlights are already staked out with nautical reference points – the Annapolis Show, The Great Lakes – rather than notable arrests.  On the other hand there is enough cop left in him to infuse his cruising commentary with an unmistakable air of moral certainty that explains why his Youtube channel has over 20 000 subscribers. His last post about the Phoenix Marine Factory tour ( https://www.youtube.com/watch?v=zKiEHEYEOdI&t=160s ) , sent from his temporary home aboard an Xquisite X5 a few days ago, has clocked up over 15000 views, and he expects far more than that once his latest adventure gets underway – a 10 000 mile trans-Atlantic return trip home.

Bowman is taking his vlogging to the next level.

In as much as Bowman’s current mission is a personal sailing milestone, it points to a fast-growing trend in the boating industry: the rise of social media as a marketing and sales tool. Bowman’s trip over to South Africa isn’t costing him a cent, at least not in air fares and lodging. Neither is he forking out for the sea voyage back, other than paying for his impressive arsenal of video equipment. His is on a most-expenses-paid trip courtesy of various sponsors including Xquisite Yachts and their latest yacht owner, Shaun, who view Bowman as a value proposition. Both are interested in Bowman’s videos, for slightly different reasons. In the case of Xquisite a single Bowman video can reach an online audience that includes their target market.  For Shaun the video will document his epic crossing for posterity in a manner way beyond all expectations. 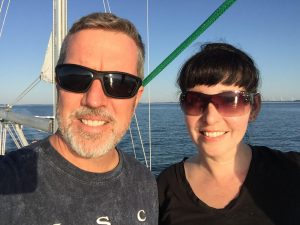 Bowman meanwhile scores the chance to grow his online audience aboard one of the hottest multihulls on the market, among a crew that for the first leg will include both the owner and the owner of Xquisite Yachts, Tamas Hamor. In the words of Tamas, it is a ‘win win win’ situation.

None of it would have happened had Bowman not started mucking around with his camera during a sailing holiday on the Great Lakes in Canada with his wife.  He downloaded the content onto the Facebook page of his local sailing club, but was advised to move it across to his own channel. “When I first started I said to my buddy that I would be lucky to get 200 subscribers,” recalls Bowman. “But within a month I had 2000 subscribers. I was getting people watching in Ireland, Australia and New Zealand – all people who like sailing.”

His hobby did not go unnoticed back at the police station, where his colleagues became increasingly curious. ”I am from Ottawa, it is not even on the ocean,” he chuckles.

However it was a decision to go searching for a bigger boat that ultimately led to his big video ‘break’ at the Annapolis show. He and his wife resolved to document their shopping experience on camera, resulting in a growing fan club. “That is when my Youtube channel exploded,” confirms Craig. “We wanted to buy a catamaran and we thought, Let’s do a quick video of what we think of each boat. We started putting out episodes like that, and the views on these were people looking to buy a boat.”

The couple realise they were tapping into another audience: people fascinated by the cruising lifestyle. “They love the dream – the love to see what other people do,” says Craig of that segment of his fan base.

There is also something serendipitous about the Bowmans’ Off-Duty escapade. Their cruising ambition and channel happen to coincide with the exponential growth of social media, with vloggers and video in particular at the forefront of redefining how content is consumed. Phoenix Marine – along with Maverick Yachts which also hosted Craig during his South African visit – are not alone in realising they need to reach potential clients online.  Entertaining ‘lifestyle’ vlogs, of which Vagabond is the current benchmark, also offer builders the chance to reach potential clients who haven’t yet realised they are potential clients, who are watching as voyeurs with no serious boat buying plans but who nevertheless harbour fantasies of one day disappearing into the blue.

For Phoenix Marine and rivals in boat building the vlogger is the new newspaper consumer columnist, except with a much bigger audience. “Social media is super important for business,” Tamas confirms, adding that online newsletters and emails were vital in connecting with a digital database built up over many years. He says a turning point for him was inviting clients to sea trials, only to hear them say ‘yes we liked the video of your boat’. Says Tamas: “People have been saying they are so excited to watch the crossing. The people booked next month to come to sea trials say they will be watching Craig do the crossing.”

Clinton Johns from Phoenix Marine is equally enthusiastic about the social media revolution:  “It’s at a boom stage – there are hundreds of these channels popping up,” says Clinton, adding that vloggers have had up their game to keep viewership, now having to offer far more than shaky hand-held point of view. “They’re having to edit it, colour grade and sound over and make them more professional.”

But power of social media could also work the other way, to one’s detriment, cautions Tamas: “We do realise the risk – this is not child’s play. A bad story could bring the company down.”

But one suspects it would take a fairly large iceberg to unsettle Craig Bowman as he sets off across the Atlantic with his video equipment. “The biggest obstacle is finding wifi fast enough to download videos,” he says, adding that each episode requires about eight to ten hours of editing. On his current trip he plans to file the first video from St Helena Island.

Does being a cop make him a better vlogger? Maybe says Craig: “I feel people watch and think I am being honest about it. There’s a bit of trust. I like to be straightforward with people.”

Does being an ocean sailing vlogger make him a better cop? It makes him a peculiar cop, particularly in Ottawa, concludes Craig: “When I tell people that I am sailing across the Atlantic to the East coast of the US they almost don’t believe me,” he chuckles. “People are just shocked.”

“I had to get permission from the chief of police to get the extended leave, and it took a bit of wrangling.”

Craig’s plan is to take early retirement in four years in order to finally hoist the mainsail of his cruising and vlogging lifestyle:  “I can leave with no penalty to my pension in four years — that is the timeframe,” he says. “Buy a boat in four years, take some time to stay on the cast and get used to it.  Get boat outfitted.  When we feel confident then we will do full circumnavigation. We’re not gonna do it in a rush.”

No more squad cars and wailing sirens. The only thing Craig wants to chase is the wind.