If it was science fiction it would be funny – an alien weed creeping up on a quiet inland yacht club, and swallowing it.

Unfortunately that’s the situation at the Transvaal Yacht Club on the Hartbeespoort Dam, where members have been unable to sail, or even reach their yachts, in over a month due to a plague of water hyacinth weed that has completely clogged huge parts of the dam.  “We’ve been locked in for about 30 days,” Club manager Fred Supple told SABBEX. “The situation doesn’t seem to be improving. You can’t get to your boat.”

Boating enthusiasts are pinning their hopes on cold winter weather which tends to limit the spread of the prolific weed, considered one of the world’s most invasive alien species. Up to a third of the surface of the dam has at times disappeared under a green weedy carpet due to hypertrophic conditions brought about largely by polluted water flowing into the dam’s catchment area.

Supple said club TYC members were still visiting the clubhouse for social events, but sailing was now impossible. He said initiatives to reduce the plant biomass did not appear to have worked. These include a financial injection from beverage giant Coca Cola Beverages South Africa (CCBSA) which has invested R25-million (£1,35-million) in a company that turns the weed into products like fertilizer and animal feed. Coke’s new partner, Hya Matla Organics, has already begun harvesting hyacinth at the dam.

John Kondowe, executive director of Hya Matla Organics, said hyacinth harvesting served a dual purpose of removing pollutants and turning them into nutrients to feed plants and animals. “Thus integrating the cycle back into economic ecosystems which benefit the economy at large,” Kondowe  said in a statement. 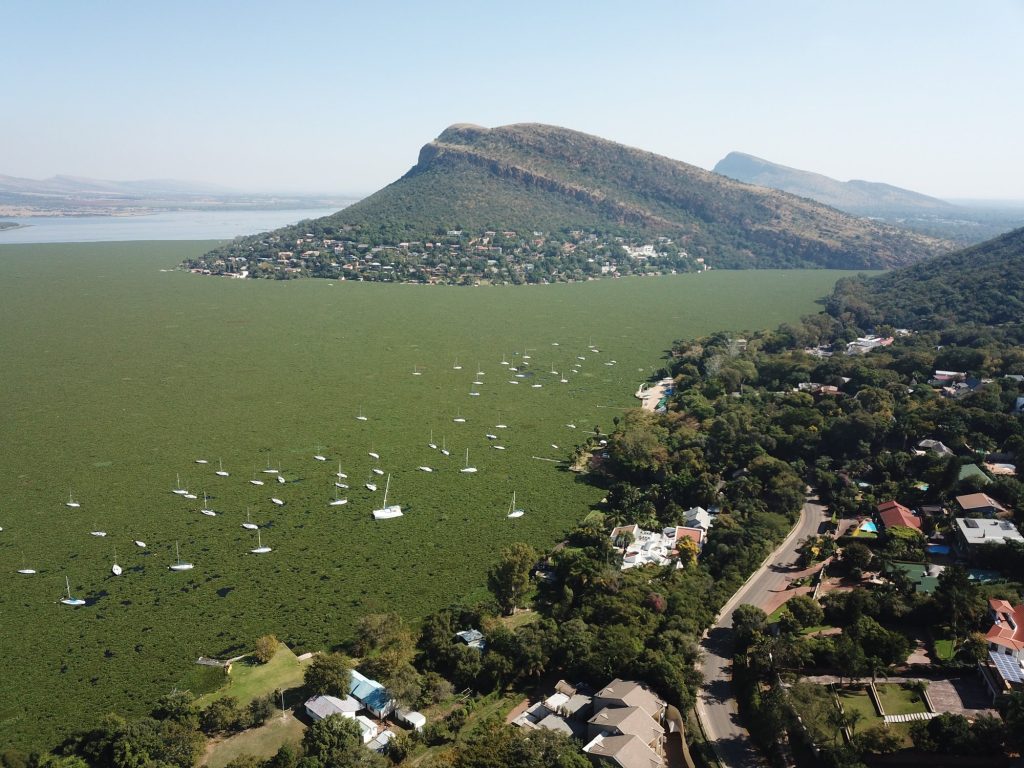 The Hyacinth problem at Hartbeespoort has been linked to deterioration of water treatment infrastructure upstream of the 20 square kilometre dam, as well as the termination of a government weed clearing programme.

A similar hyacinth bloom in the 1970s had been treated with a poisonous crop spray that had damaged other organisms.