Local entrepreneur plans to offer much more than a booze cruise

With its old timber mill and paddle cruisers, Knysna has long been a place of historic charm. 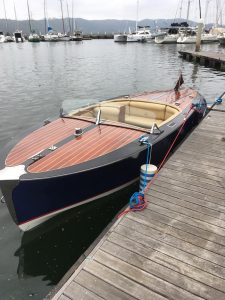 No surprise therefore to see the introduction of classic boat charter trips to the famous Knysna Heads thanks to local entrepreneurs Peter Edgar and Orbert Mkhwananzi.

Visitors to the picturesque Garden Route town can now explore the lagoon aboard a Chris Craft replica, with a Riva replica likely to launch later this year.

The classy addition to the town’s tourism sector will build on the recent success of the Knysna Antique & Classic Boat Show, which harks back to the days when wooden boat construction was the mainstay of the local economy.  Although carbon fibre and epoxy have since replaced wood in the leisure boat building sector, classic wooden boats have seen a resurgence in interest, with a second wooden boat festival recently launched in Stanford in the Western Cape.

Edgar says he had originally been looking for a ferry, but changed course when he caught sight of the Chris Craft replica during a visit to GAW Marine in Johannesburg. “We looked at it and we knew this was the boat,” says Edgar. “We did a trip on the Vaal, and ten days later we had paid for the boat.”

“The boat takes you back in time a bit, just like Knysna.”

The project has been in development for the past three years and finally came to fruition late last year with licence approval from the South African National Parks Board. The approval coincided with an opportunity to launch from the Knysna Waterfront. “It has all come together quite nicely,” Edgar says.

Another interesting feature of Knysna’s new classic boat charter is Edgar himself, an engineer by training who once ran a conservancy in Peru.

However Edgar is gracious enough to admit he is not the first classic boat charter on the Knysna lagoon: “Apparently there was a couple with a wooden boat who launched from the angling club,” he explains. “They went straight into a sandbank and totalled the boat.”

The service launched over the Easter weekend, several months sooner than expected. Edgar is now gearing up for the Oyster Festival weekend and beyond that to prime tourist season.

2019-05-09
Previous Post: SAVED! NSRI Welcomes the First of its New Fleet of Search and Rescue Boats
Next Post: End of an Era as Balance/Nexus Launches Last of 601 Series