Sabbex caught up with the new man at the helm of the Knysna Yacht Company: 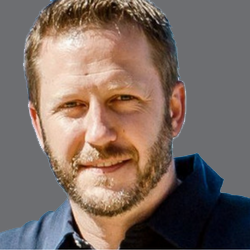 SABBEX: There’s a rumour you’re from Joburg. Is it true? How did you escape?

GB: “Escape” is a good way of putting it. It was carefully planned and orchestrated and I’ve not looked back. Yes that’s true, well I actually grew up in Pretoria but spent most of my working career in Johannesburg.

SABBEX: The switch to boatbuilding. Had this been on the cards for some time, or was it more spontaneous?

GB: The decision to leave Johannesburg and to make a change in career was on the cards for a long time. I’d say the opportunity to get into boatbuilding was more of a “means to an end”. My brother, Craig Boshard and I shared a common dream to step out of the “rat race” and settle in a place that could offer a better quality of life for our families. Craig was living overseas at the time and I was running my own business in Johannesburg. We’d taken steps to start looking for businesses (preferably in export manufacturing) along the Garden Route and had been put in touch with Kevin Fouche via a local Knysna business broker. In December 2016 we made the first trip to Knysna to meet with Kevin and Rika to explore the possibility of acquiring the Knysna Yacht Company from them. The meeting went well and we embarked on a period of negotiations that concluded in July of 2017, that ultimately resulted in me moving down to Knysna in August with my wife and 2 kids shortly after. Kevin stayed onboard full time for 12 months to show be the ropes until August 2018 and Craig then made the move from Poland back to South Africa to join full time from January this year.

SABBEX: Where did you grow up and was there an interest in sailing / the water?

GB: Sailing has always appealed to me but growing up in Gauteng the opportunities to get involved were few and far between. I had a childhood friend whose parents invited me on a sailing holiday during which we sailed on a mono-hull from Hout Bay to Knysna, little did I know (some 27 years ago) after making my first entry through The Heads that I’d eventually call Knysna my home. After taking a “gap” year and travelling abroad I returned to study in Port Elizabeth during which time I belonged to the UPE sailing club and also had a part time job working on a day-sailor called “Millennium Explorer”. I’ve learned a huge amount over the past 2 years but still consider myself somewhat of a novice. It’s my dream to go sailing (on a Knysna cat of course) with my family for a couple years, hopefully in the not too distant future. 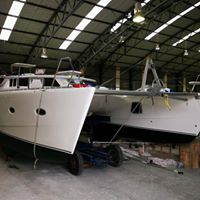 SABBEX: How well did you know Knysna before moving down?

GB :Not very well, It’s a town I’d driven though plenty of times but never had an opportunity to spend much time in.

SABBEX: What was it like settling in? Was it what you expected?

GB: Up-rooting your family, moving away from your support system and making a complete change in career all at the same time was always going to come with some challenges. I’m fortunate to have 2 amazingly resilient kids and an incredibly supportive wife. Kevin and Rika were also very supportive and have exceeded our expectations in every respect as far as the “hand-over” of the business was concerned. They remain very involved and will continue to sell and market the Knysna catamarans for the foreseeable future. As far as settling into the town goes… it’s really helped having 2 small kids… we spend most weekends at kids birthday parties which has opened the door to a number of   blossoming friendships.

SABBEX: They say you’re into systems and processes. What does that actually mean? 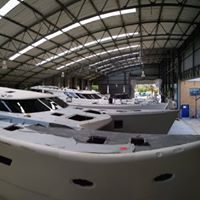 GB: Well, I did a BCom degree in Information Systems and worked as a business consultant for a couple years before starting my own business in the same industry selling and implementing SAP Software Systems into businesses mostly in the manufacturing sector.

SABBEX: What did you make of the systems and processes at the Knysna Yacht Company?

GB: It’s easy to implement and automate processes and procedures into a business where there is already a culture of good business practice. This was certainly the case and we’ve had a solid foundation from which to continue building.

GB: Absolutely, the company and its staff were part of Kevin and Rika’s extended family. Fortunately, they had the foresight to put people in place that were able to ensure its’ continuity. The staff at Knysna Yacht Company have been fantastic and have all been incredibly supportive.

SABBEX: Do you plan to steer the company in a different direction or are you happy to keep the course?

SABBEX: What is your take on Brand SA in the luxury cat market?  We have an impressive share of the market — do you feel it’s a case of ‘use it or lose it’?

GB: We do indeed have an impressive share and a solid reputation on which to keep building. I believe that innovation is the key to remaining at the forefront of any industry. Economic climates change and any business whose competitive advantage is based on price could quickly be found wanting when circumstances outside of their control are no longer favourable. I believe that in order to retain our share we need to focus on building a reputation for producing innovative products of the highest possible quality and standard.

SABBEX: People like Phil Berman believe SA builders are still too ‘solo’ and need to collaborate more to gain global market traction. Would you agree?

GB: There are a number of different builders in SA catering to different markets. I believe there is definitely room for collaboration when promoting “Brand SA” as a boat building destination in the luxury cat market.

SABBEX: Would you say Knysna could grow its share of the luxury build market? Or should it concentrate on being a niche player?

GB: I believe we still have massive potential to grow within our niche of building semi-custom luxury blue-water cruising catamarans that are comfortable to live aboard yet still exciting to sail.