From Dead Pigeons to World Beaters: the Story of GEMINI MARINE

What do Dassen Island, dead pigeons, and the South African National Defence Force all have in common?

They are all plot points in the remarkable story of Gemini Marine, the Rigid Inflatable Boat manufacturer currently celebrating its 40th year.

So widespread are Gemini’s eye-catching red RIBs that it’s fair to say they are today a semi-permanent feature of South African coastal life, thanks largely to the National Sea Rescue Institute which relies on the boats’ rugged seaworthiness. But few people know that the company’s success is also the result of fortuitous circumstance and an ongoing love affair – both involving co-founder Jeff Stephens.  It was Jeff’s love for the ocean, starting in Mossel Bay where he grew up, which set in motion a string of events that ultimately gave birth to Gemini.

A visit to the company’s yard in Epping reveals how much has changed since 1979 when Jeff and his father Mel first began work in a tumbledown building in Cape Town central, on the corner of Hout and Bree Street.  “It was stuffed with dead pigeons and things,” says Jeff with a trademark wry grin, still looking relatively youthful for a man who has built almost as many boats as the Vikings. “We swept all of that up, my father and I, and we started laminating.”

40 years and several factories later, he’s still at it, except the company now employs around 135 people and sends boats to countries the Vikings never dreamed of. 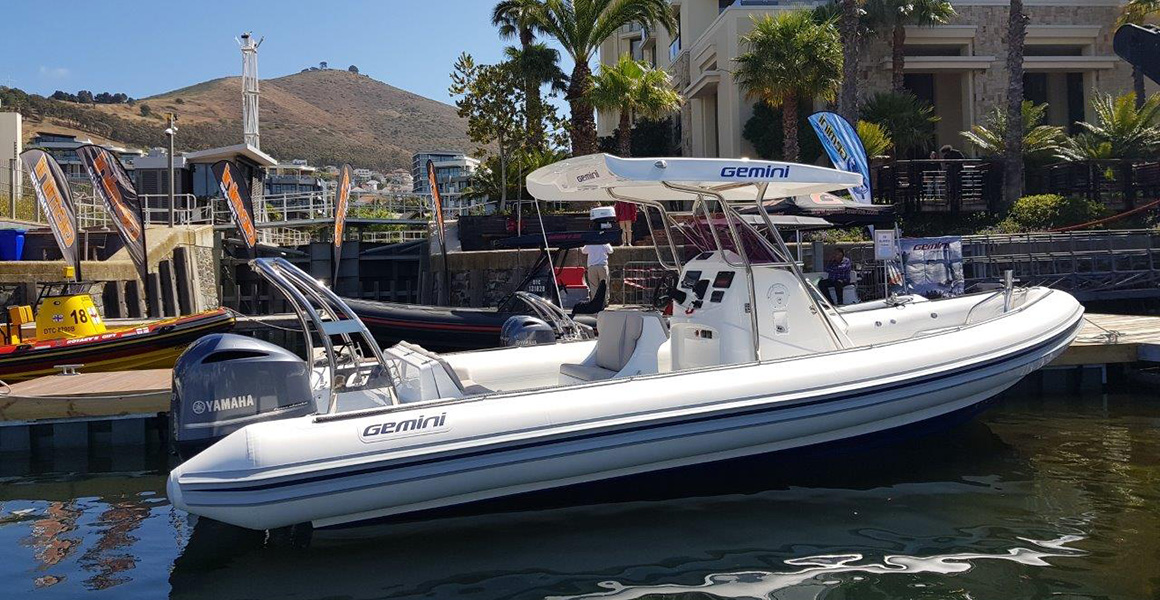 But just as remarkable as the company’s success is the back story to Gemini Marine, starting with Jeff’s early boating career, in particular a small inflatable he used while visiting Dassen Island while when he was just 14. The boat made such a lasting impression on him that he was still thinking about it when pondering his future after school. Fate then intervened in the form of a chance meeting while in the navy, with a man who posted Jeff to the navy’s inflatable boat department. By then Jeff was already an accomplished sailor, but the chance to work with inflatables was an unexpected bonus: “I was astonished that this guy I had met in the navy followed through,” recalls Jeff, who is quickly sentimental about the ‘early days’. “I had met him down in Simon’s Town after a yacht race and he asked my name. He was in charge of apprenticeships. After my basic training he followed through.”

That’s how Jeff landed up running his own ‘inflatable’ workshop, aged 20, at taxpayers’ expense while others were eating bully beef under Acacia Trees in Angola. “We even got a budget to design and build our own inflatables which was unheard of for a serviceman. I learnt an enormous amount.”

If things were busy during military service they became crazy busy afterwards. After completing an apprenticeship at an inflatable manufacturer in the UK Jeff wasted little time kick-starting Gemini upon his return to Cape Town.  “At the time there was zero market for inflatables. Less than a 100 boats had ever been sold in South Africa — tiny little things with oars. So I set off going against the flow. Everybody was saying ‘Inflatables? You are crazy!’  I persevered.”

A turning point was a bad weather encounter outside Hout Bay which convinced Jeff to design a new kind of hull suitable to South African conditions – a boat built “to go out when other boats are coming in”.  He approached the NSRI with his concept design and, with the help of Angelo Lavranos, secured their business, a relationship that continues to this day with weekly meetings between the NSRI and Gemini staff. The Gemini RIBs could handle heavy weather unlike any predecessor. Says Jeff:  The NSRI found that it was the first boat they could operate at night without seeing where the boat was going. The crew felt totally comfortable because they knew the boat would just find its way through the conditions, whereas before they just had to take it really easy in these conditions.”

“After that the NSRI decided that all NSRI stations needed the boat.”

“Things just grew from there.” 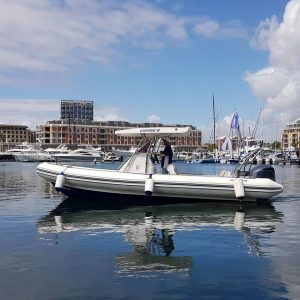 What followed was an inflatable ‘golden era’, Jeff says, when guys racing in the surf became cooler than Saturday afternoon braaivleis and rugby: “Inflatable boating became so popular that rugby clubs were battling to field B teams or C teams because everybody was out inflatable racing,” he recalls.

The racing scene was a worldwide phenomenon and put inflatables on the centre stage of water craft, not least because of the outrageous images of airborne freaks ramping through building-size waves – a marketer’s dream.

However a walk through the Epping facility reveals how far RIBs have come in a relatively short time. The hugely popular 5m Gemini waverider is small fry next to the new 10.6m ribs, and there are plans to go bigger. The larger designs now have cabins, and inflatables are now venturing where RIBs have been before, including into remote latitudes for polar exploration or secretive military manoeuvres. “Waveriders have been used virtually all over the world, in Antarctica and on Zambezi river. Can you find  two areas more unlike?” says Jeff with obvious pride. “We helped create the market. Inflatables have proven themselves as the best for the job: they are intrinsically seaworthy. They bounce. They can take an incredible amount of abuse – it is actually mind-boggling.”

And what of the future?  Jeff hopes for even more success, buoyed by South Africa’s relatively low labour costs and valuable marketing ‘cachet’ of producing rugged boats tried and tested in the infamously troubled waters of the Cape of Storms: at times we’ve thought about building hard hull boats. But what we do is inflatable boats, especially RIBs.”

“We have always been very focused,” concludes Jeff.