SABBEX: Hybrid boats seem to be ‘on the rise’. Would you say this is largely due to environmental awareness?

KO: This has to be the only motivation; it’s not just an eccentric choice.

KO: Not quite. The green version can add up to 33% of the base price to it and many Cruising clients work with a limited budget.

SABBEX: Are there other reasons to ‘go green?’  Would you agree that in the long term the costs would come down?

KO: One can go totally philosophical about the reasons to go green but this is not the place. More people are getting interested (for different reasons) and buying into it.  The electric option will become much more cost effective and will challenge the diesel propulsion systems in the long term. However Volvo and Yanmar have plans to reduce and eliminate diesel as the fuel driving their engines, which in turn will put pressure on the electric propulsion manufacturers. Interesting times ahead indeed.

SABBEX: Some builders claim their electric system is as efficient and cost effective as diesel engine. Is this on the horizon?

KO: Presumably battery storage is the limiting factor right now. What are the comparative ranges of these two systems? Cost is a driving force. A client of ours worked out that changing from diesel propulsion to hybrid would save him money within five years when taking into account maintenance of the diesel engines, wear and tear, diesel cost versus the purchase cost of the electric propulsion including batteries. The batteries are not cheap and need a certain amount of knowledge/awareness to operate them. For a boat owner who uses his boat a lot, an electric system will pay off.

SABBEX: What are some of the key challenges with hybrids that still need to be overcome, or are there no major challenges left?

KO: No major challenges. However, as the need for more power and speed increases so will the challenges. The electricity storage (batteries) is the main challenge. Far more development is needed to make them more user-friendly, more affordable and able to last longer.

KO: All required components come from either Europe or US

SABBEX: You’ve gone with Oceanvolt. Why?

KO: We started to follow the “new propulsion technology” many years ago. Reports did not read well, promises were not kept or manufacturers did not respond well to enquiries. Oceanvolt did a lot of research and kept informing us about developments. They offered a package which not only appealed to us but also complemented our style and quality.

SABBEX: Are we reaching the point where a builder’s default design /model will be a hybrid?

KO: From the Voyage Yachts perspective — yes. The new design Voyage 575 was designed as a charter vessel with electric propulsion in mind with the option to go diesel; not the other way around. Will other builders follow this approach? I hope so.

SABBEX: Are there lessons to be learned from the automotive industry?  Hybrids are commonplace in some markets, but lagging far behind in most areas.  Is this a concern? 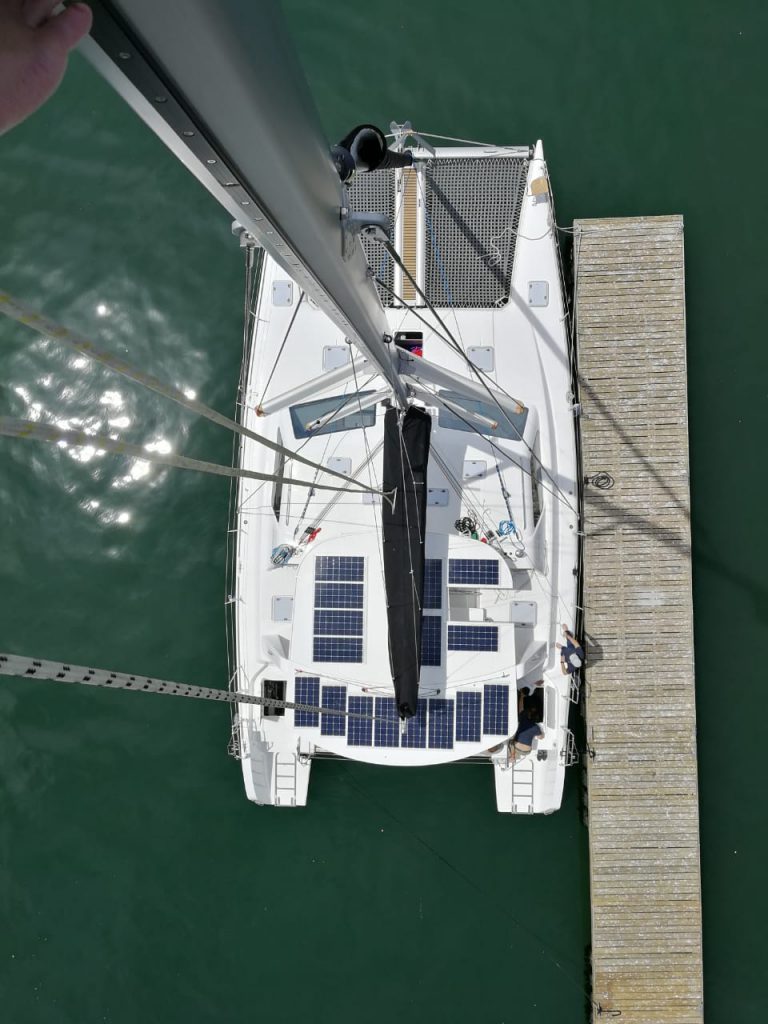 KO: Time will tell. Every industry has its own dynamics. Boatbuilding, in many aspects, gets often compared to the automotive industry. But it’s not that easy. It’s what an individual learns from it that is important.

SABBEX: You’ve spoken of the eerie ‘silence’ when first trying out your own hybrid. Were you surprised?

KO: I knew what it should be like, but after launching close to 200 catamarans with diesel engine propulsions one subconsciously expects engine noise, vibrations and fumes. But there were none although the vessel was moving (sails were not on board yet). I thought that this has to be the future.

SABBEX: Do you think there is a case for ‘incentivising’  hybrid boats, ie with some kind of rebate, given the move towards reducing carbon emissions etc?

KO: Governments around the world should be incentivising any carbon reducing system.

SABBEX:  Your first hybrid launched in December and the first of the new series is a hybrid too. Sounds like the second of the series could go that way too. Is this a sign of the times?

KO:  Definitely is. The December boat and the first Voyage 575 are destined for charter operation with Voyage Charters in the BVI/Caribbean. The Voyage 480 “Electrified” has now been put into charter service and time will tell how successful it really will be. The owner of “Electrified” took his vessel out for almost a week and was extremely happy about the performance; so much so that he is in talks with Voyage about a possible 2nd Voyage 480.

SABBEX: Any more thoughts / comments on this subject?

KO:  Comparing AC systems to DC systems would be like saying; an AC generator is like a running water tap (kWatts), when you need power you put your cup into the stream. What you cannot capture in the cup spills over into the drain. A DC generator is like filling the water drum (batteries) and then just tapping out (kWatts) what you need into your cup. Ultimately it is hugely more efficient converting diesel to usable electric energy (kWatts) in this manner.

The magic of the system is the generation of DC power and the storage of this DC power. Because the DC generator has one duty only, which is to fill the battery bank as efficiently as possible, the use of the systems such as air-conditioning, water making, water heating etc are very easily operated at any time without having to start the generator.

Once this DC installation has been achieved then it makes sense to install electric motors. The vessel will have the ability to store the regeneration of the electric motors energy and store whatever solar energy that is generated. The system becomes “magical” and therefore very desirable from a user friendly point of view and also becomes very economical as typically the fuel consumed is 20% of what would normally be consumed. Having to find diesel is no longer much of a requirement!