From calamari rings to catamarans: the rise of St Francis Bay

6th Avenue in Sea Vista Industrial Estate, a buggered little stretch of road in need of a bulldozer. My skedonk lurches between potholes, desperate for tar. The air is howling, the same wind that sunk ten ships in under a century around the corner at Cape St Francis where the waves are the size of Eskom pylons.

Fat lot of good is the lighthouse here – this place needs an evacuation plan.

Not so, says a jovial Roger Paarman, happily ensconced manager at Nexus Yachts where my car eventually finds refuge in the parking lot of an enormous boat yard. Rugged and weather-beaten 6th Avenue may be, a dead-end it is not. 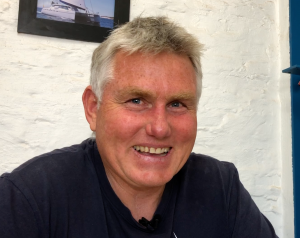 Against the odds I have arrived on the doorstep of an international success story. Three brothers, a family friend, and a small gang of marine manufacturers have turned a gale force tourist town on its head – from a shipping graveyard into the birthplace of world champion catamarans.

St Francis Bay is now better known for its resin-infused buoyancy than barnacles and whale bones.

Explains Roger: “My brother Mark had this brainwave idea that he was going to build a 60ft catamaran and go to Indonesia and surf, and immediately when we all heard ‘surf’ we got excited. And he put this proposal together that we could come to St Francis, surf, build boats and sail off into the sunset one day.”

The plan found obvious appeal with the close-knit – and surfing-obsessed — Paarman clan who grew up in Bukoven on Cape Town’s Atlantic seaboard. The family already had a foot in the fishing industry, but boat building was new territory. New swell.

“Mark discussed the plan with his long term friend John Henrick who said he had been thinking of building a yacht to go fishing on,” says Roger. “The two of them got tougher and basically that is how Nexus Yachts was born.”

Of all the flotsam to wash up in St Francis, Paarman and his brothers are among the most valuable. Their story would be pure Hollywood if it didn’t end in manufacturing. Surfer brothers from Cape Town seek a boat to go exploring waves. Oldest brother wants to build it himself and asks his bros to help out. They set up shop within a frizbee throw of one of the world’s great surf spots. Moral of the story: if you braai with enough gumption you can actually have your vetkoek and eat it too.

By 2007 the Paarman brothers had relocated to St Francis Bay to build their first 60ft vessel: Mark the co-owner, Jonathan the production specialist – ex Voyage Yachts – and Roger the hands-on whizz-kid who could Mcgyver a fibre-glass surf fin out of a packet of Rothmans and a koeksister. Serendipity helped too in the form of a vacant piece of St Francis land owned by long-time family friend-turned business partner John Henrick, without whom the project would almost certainly have been based in Cape Town.  Henrick and Mark were already established in the fishing industry, specifically chokka, operating out of St Francis Bay harbour. It was this business relationship that formed the bedrock of Nexus Yachts and turned a boating daydream into reality.

“We were looking at building the (60ft) boat in Cape Town — that was the plan,” recalls Roger. “We looked at premises in Montague Gardens. We also looked at the Southern Spars factory, but at that time they decided to do carbon masts.”

“Then John (Henrick) said he had a plot of land in St Francis, and the idea was that maybe it wouldn’t be such a bad thing to get out of Cape Town and go do it there. When I got here we were still putting the roof on this factory.”

More Paarmans arrived (Jonathan and Co) and the project moved up a gear, The family knew that piecing together a 60ft behemoth exploration/fishing catamaran would take more than a bit of sex wax, but there was little trouble making the drop into manufacturing. They settled on building one spec boat to debut at the Annapolis Boat Show, where the name Phil Berman was top of their list.  “I had hoped to sell (him) our Nexus boats, but Phil had another plan in his head,” Roger says. “When we met (in Annapolis) he didn’t discuss it, but he already knew he wanted to develop the Balance range and he saw that what we had already built would fit in well with that range. And so we ended up rebranding our boats.”

Thus began another bromance: Berman in the North, an adventurer in both deed and dollars, as savvy in business as he was in his competitive sailing days when he won the Hobie 14 World Championships; Paarmans in the South with their never-say-die philosophy and practical expertise. Berman the consummate marketer who could sell multihulls in the Maghreb; Paarmans in the takeoff zone to get the job done.

The result was the now famous marriage of convenience called Nexus Yachts/Balance Catamarans, currently busy with hull number seven after an auspicious start culminating in the coveted Cruising World Boat of the Year Award in 2017.

Berman describes the marriage as one underpinned by the age old principles of trust and common sense. In a media interview in 2016 he described his partnership with Nexus as “a desire to co-design boats that I believed would sell in our markets.”

“But those boats had to be well built and come in at affordable prices. In the end, however, no long term business relationship can work with deep trust in the partners, and in this case, the builders and their ownership. I spent a great deal of time vetting my partners. To make anything such as this work you require deep trust and almost a family approach,” Berman said.

Did the scale of success come as a surprise? “We knew we could do it,” says Roger, whose upstairs office at the Nexus Yard looks onto the incomplete hulk of the latest 526. “I don’t think we anticipated being two year on the (first) build, but for us it was more important to have the boat right than to just get it out.”

While many will be familiar with their boats, the yard is itself a sight to behold in the middle of Sea Vista industrial park. Artisans scuttle across the current build – the third one this year – like oyster catchers looking for limpets. Man and machine locked in well-oiled symmetry, all-the-more remarkable against the backdrop of a quiet fishing dorp.

Even more surprising than the Nexus/Balance yard is the fact that it has all been done before in St Francis, just down the road, by the man who almost single-handedly put St Francis Bay on the boatbuilding map over 20 years ago – Duncan Lethbridge from St Francis Marine. The Paarmans are quick to acknowledge Lethbridge as the original pioneer in this unlikely boat building location. If Lethbridge could do it successfully, why shouldn’t somebody else too? St Francis Marine provided the ‘proof of concept’ for the Nexus/Balance ambition.  “If Duncan could build a boat in St Francis, it was proof that we could do it too – that was definitely a factor,” says Roger. “It showed there had to be some skill in the area and it gave us confidence to know that we could build boats here – and launch them too because of the port.”

“What was important, though, was that we didn’t come in here and steal any labour.  So on my first day I went and introduced myself to Duncan and gave him an open door to my factory,” says Roger.

It’s a gesture that appears to have paid dividends, for Lethbridge speaks no ill of his high-flying neighbours during a two-hour visit to his family-run business on the outskirts of town, where no less than four boats take shape across a massive facility.

Lethbridge is to South African boat building what Gary Player is to golf. His association with designer Angelo Lavranos was a game changer for multihull construction. And just like Gary Player, who famously designed a golf course in the most unlikely location – Sun City in the Pilansberg – Lethbridge is a living legend whose commercial chutzpah paved the way for future generations.

What few people know is that it Lethbridge started building boats in St Francis Bay almost by accident, having been posted to the area to help sell – and later build – houses for a commercial property developer. At the time St Francis was in the midst of a growth spurt; Lethbridge adapted his skill-set to focus on boats. After a brief dalliance with monohulls he switched allegiance to multihulls, particularly after a shopping trip to Lavranos in Cape Town who convinced him to build his 43-foot catamaran design for a family cruise. “I got tired of houses and there was more fun in boats,” says Lethbridge, a genteel elder statesman of the trade who evokes a bygone era of pioneer business. He is quickly sentimental when talking about the early days when St Francis was still being developed as a holiday resort by the Hulett family of Hulett’s Sugar fame: “The first boat was a big hull for a monohull and then we expanded and expanded and now we have quite a big set-up,” he says with trademark understatement.

And so the unlikely boat building hub of St Francis Bay continues to grow, one hull at a time, buoyed by a history of resilience and passion. Never has one small town produced so much silicone and resin-infused fibre-glass.

You don’t need to be a Paarman to know there’s a fine line between catching a once-in-a-lifetime wave and a spectacular nosedive into the shell-line of the deep south. In life as in surfing, it helps if you paddle like hell.

Concludes Roger: “Two boat building yards in one small town winning these prestigious awards and recognised by the industry throughout the world is huge. We are now not just some little town, we are a town where people produce award winning boats.”