It was a moment of revelation.  Mark Delany, still a toddler, sketching boats with his father under a grey Belgian sky. His father draws a ski-boat; Mark turns up an enormous fishing trawler.

“He didn’t want little boats, he wanted big ones,” recalls Rod Delany with a smile. “We used to wonder where that was coming from and where it was going to end up.” 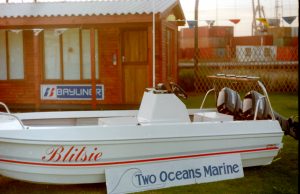 Fast forward thirty years and Mark is building South Africa’s biggest ever power catamaran at the helm of a business started in a 4x3m wooden ‘hokkie’ in Paarden Island. The kid who loved big boats is now the entrepreneur sketching big plans – with big numbers. Rod is not surprised: “He came back from studying marine engineering in America, walked into our little hokkie, and said Gee dad this is nice but this is a ‘mom and pop’ show. We have to go bigger. Either I am going to go bigger on my own or we can go bigger together.”

Explains Rod: “Mark is a lot braver than I am. He always wanted to build bigger boats.” 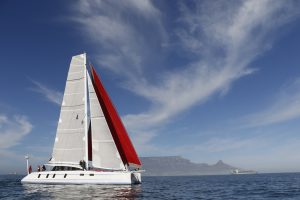 From humble beginnings Two Oceans Marine Manufacturing has grown into one of Africa’s boat building triumphs.  At heart it’s a family success story, staked out with the usual plot points of setbacks, fortitude, skill, timing, and good fortune.  It also owes much to a strong bond between father and son, which found expression in their shared love of the ocean. “We are friends, not ‘father and son’,” confirms Rod, who now lives in Knysna with his wife Irene, both of whom retain a keen interest in the business they started 30 years ago. “I miss it terribly,” says Rod, “I got out early because I realise you can’t have two bosses.” 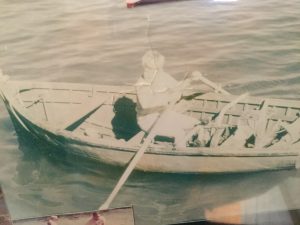 Knysna is a common thread in the Delany story.  Family holidays to this world-renowned lagoon were hugely influential in driving a family boating legacy originating further up the coast at Storms River. Rod’s grandfather owned a farm overlooking the river mouth, and lived in the house that later became the famous Storm’s River Restaurant.  Little surprise therefore when Rod began messing around in his own dingy with a dodgy seagull engine.  “In the early days we started in a rowing boat, and that progressed to outboards,” says Rod. “If you had a 5hp in those days you were a big deal.” 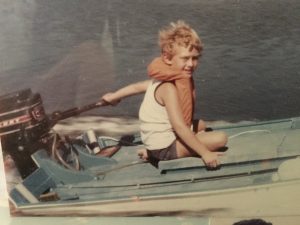 Rod was soon a big deal in waterskiing too, representing his school and later his country. At one stage he fancied a professional skiing career but was persuaded to pursue mechanical engineering instead; had he done otherwise there may have been no Two Oceans Marine. “All I wanted to do was go to America and ski, ski, ski – and luckily I didn’t in the long run,” he says.

However skiing did at least provide some impetus in his personal life; he first got to know Irene during a ski trip to the Vaal River, and they got married during an international skiing competition. For their honeymoon she got a trip to Italy for the European skiing championship. 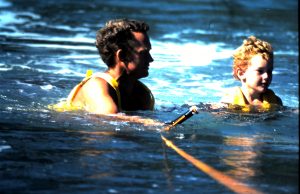 When Mark was born a few years later, he had little choice but to join in the water sports lifestyle: “He grew up in our training boat,” quips Rod. “We used to train with a massive G8 (engine). Irene used to drive, I used to hang off the back, and Mark was in his crib on the floor.”

At this stage, despite their love of boating, the Delany love affair with boat building had yet to materialise. Rod’s job in the oil industry led the family to Belgium where they were forced to spend most of their time indoors. They resorted to touring harbours to get their boating ‘fix’, while their hearts grew ever fonder for boating adventure back home. Fate then deposited them back in Cape Town where Rod bought a service station on Newlands Avenue – a fortunate move as it turned out. Explains Rod: “The service station not enough to keep us busy so we decided to do boats — so I kind of reluctantly made my hobby my business.”  Many Capetonians may still remember the line of ski-boats stranded on the kerb outside the Newlands Avenue service station in the late 1980s, a time of great turbulence in South African history.

The plan worked, and Two Oceans Marine was born, initially operating as a supplier: “We started buying  boats from Peter Lindenberg and engines direct from Mercury outboard motors – that is really how we started. We put them all together at home at night and moved them to the service station forecourt in the day.”

The biggest problem was moving the boat trailers on Saturdays when there was rugby down the road at Newlands stadium. 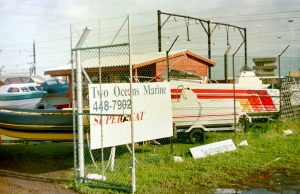 Within two years they had moved to Paarden Island, to the famous ‘hokkie’ that for a while was all they were allowed to erect. Eventually permission was granted to build a proper workshop where they quickly increased their boat range, incorporating hulls from Supercat in Port Alfred.

A key turning point was a chance outing in Knysna – there’s the Knysna connection again – in a small power catamaran, at that stage a boat seldom seen in Cape waters. “At the time Cape Town did not have cats – they were basically unheard of,” says Rod. “I too was anti them.”

But the trip through the Knysna Heads changed all that: “I couldn’t believe it — I said this is the way to go, and then we started working only on cats from Supercat Marine.”

It proved to be a fruitful partnership and springboard to future success. Neil Schultz, current Supercat managing director, recalls a “very successful collaboration” between his father Dennis and Two Oceans that involved around 100 boats and boat components up until about 1998. “Rod, his wife Irene, and son Mark were always very upbeat and delightful to deal with and they became close friends along the way,” Neil says. 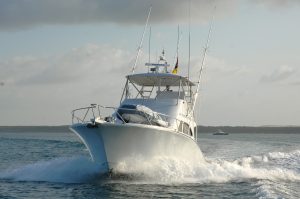 It was at around this time that business growth began to accelerate, coupled with a demand for bigger boats.  Rod says this was partly thanks to Dennis Schultz – “an extremely clever guy”: “We put pressure on him to build a bigger boat because we only had a 17ft and 20 ft,” recalls Rod. “We needed to go bigger because the cat market took off very quickly, and Dennis obliged with a 26 ft model.”

Fate then intervened in the form of a remodeled Mark Delany, fresh out of marine engineering college in Daytona Beach. He spotted the potential for massive growth – and was quick to act on it.

Rather than fetch the Supercat 780s from Port Alfred, the Delanys promptly bought the moulds and expanded their operation. Continues Rod: “I was reluctant to go into boatbuilding myself but Mark was keen. So we started a small little factory at the airport industria and at the same time built a proper workshop at Paarden Island.

The business was primed for takeoff.

Some major commissions also helped boost business confidence: a paddle cruiser for well-known broadcaster and former Knysna stalwart William Smith who owned the Featherbed Reserve;  a 780 for world famous novelist Wilbur Smith; and a commercial patrol vessel for IMT, a division of the SA navy.

Ironically it was also two unrelated setbacks that strengthened the family’s determination to succeed – and tested their resilience. The first was an ill-fated business deal with American partners that led to protracted legal action; the second was a devastating fire that destroyed the company’s moulds at their Paarden Island facility.  Both misfortunes, though distressing at the time, were nevertheless fundamental to the company’s emergence as a global player. Whereas the legal battle was a lesson in self preservation — which may partly explain why the company is self-sufficient in almost everything except stainless steel — the fire provided an opportunity to design new moulds to match the company’s new vision of bigger boats.

“After the ferry we decided we wanted to build bigger yachts. We worked with Alex Simonis to build two 50 footers, one for a customer and one for ourselves,” recalls Rod. “Our adage has always been you can’t build something if you don’t know exactly what is going on.” 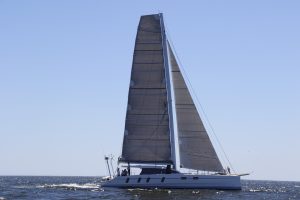 It’s an adage that translates happily into ocean cruising time, which was to serve up yet another fateful moment, on a family trip back from Madgascar. Explains Rod: “We sat there and said we need a bigger boat — the 50 footer is too small. So we did matchbox sketches of a75-footer, got back to Cape Town and took sketches to Anton du Toit — and the rest is latter day history.”

Sitting in his office adjoining the current gigantic Two Oceans yard on Neptune Street, Paarden Island, Mark is his usual affable self despite his restless cell phone. Phil Berman (The Multihull Company) is loitering downstairs, lost somewhere between towering multihulls; Anton du Toit is there too, clipboard in hand. But Mark is happy to pick up the Two Oceans story with genuine pride.  “Things really kicked off when we bought the moulds from Supercat and started building our own boats and coming up with our own designs,” he says. “Initially the boats were used predominantly for tuna fishing in the local market, but we ended up exporting them elsewhere such as East African and the Indian Ocean Islands.” 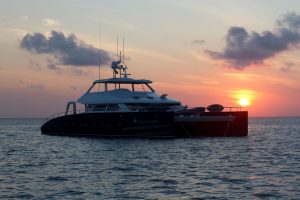 “Luckily we’ve always had our smaller boats as bread and butter, which gives us the freedom to work on bigger, unique custom projects which are incredibly exciting. Over time the custom projects have grown to become our core business.”

“Diversification has been important because it has kept us going, with the smaller boats filling the lull periods between big custom builds,” says Mark. 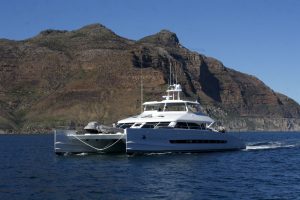 The company’s decision to pursue a niche market also enabled growth that might have been more difficult to attain in the production catamaran market.  Other success factors include: a top design and production team; South Africa’s competitive advantage – currently tenuous – of cheaper overheads relative to rival custom-build yards in Europe; and a savvy clientele willing to invest in what remains essentially a passion project, led by people for whom boats are more than hard currency.

How important are the family values and brand identity underpinning Two Oceans Marine, and the obvious affection between father and son? The question comes as a surprise to Mark, accustomed to more material concerns, but he concurs: family ties are a big part of the business story: “There has never been one tiny bit of conflict between us – he has always really supported my ideas, be they good or bad.”

As we exit Mark’s office past a two staff hard at work, one thing stands out from the pile of paperwork before them: boat drawings.  Lots of them.

The hulls are bigger but some things never change.