How did he do it? SA sailor solves wreckage mystery on St Helena Island

John Titterton earned high praise for identifying catamaran wreckage which had resurrected speculation about the missing TUI vessel that capsized in 2015. It turned out to be a different vessel.  The former delivery skipper talked to SABBEX about how he figured it out.

1) You were once a delivery skipper for TUI.  Is this how you got involved with the investigation into their missing Leopard (2015), on behalf of the families?

I am a delivery skipper who has taken a break from the business to look after my wife, who suffers from Alzheimer’s, and with an investigative background as an ex policeman many years ago, I enjoy trying to solve puzzles within the recreational sailing industry. This is why I offered my services to the families of the missing Moorings A5130 in January 2015.

2) Previously you concluded that the missing TUI vessel was most likely sunk due to a disastrous tow. Cold comfort for the families.  Is it case closed as far as you’re concerned?

Yes, the investigation from my side is closed. However, the families, to my knowledge, have reached an agreement with TUI but there appears to have been no final investigation report from SAMSA.

3) How did you first hear about the St Helena wreckage?

I am not only a sailor, but also an amateur radio enthusiast or HAM. Having stopped off at St Helena island during deliveries, around 40 times, I have built a friendship with many of the islanders. One of them, Bruce Salt, is also a HAM and he contacted me with the initial query for assistance.

4) From all accounts the wreckage was washed up in an inaccessible place. But you managed to get 20-odd photos. Who took these pics?

The wreckage washed up on Turks Cap Bay. They call it a beach, but it is actually just a rocky area at the bottom of a cliff. It must be remembered that the island was formed by volcanic eruptions and thus has, mostly, cliffs going straight down into the sea. The access is very limited (and technically challenging). The Sea Rescue Services on the island, which is a division of the St Helena Government Police Directorate, received reports from fishermen at sea that they had spotted what appeared to be wreckage on the rocks. As it was too dangerous to access the area by sea, a team was put together who climbed down to the wreckage, inspected and photographed it. A week later another climbing group, just interested residents, climbed down to the wreckage and took a few more photographs. It was one of these second batch of photographs, taken by Ed Thorpe, that I was able to first use to identify the type of boat the wreckage was part of.

5) It’s obviously not the first time you’ve been involved in these kinds of investigations.  What is the basic process one follows?

This was a bit of a strange puzzle to put together to build the end picture. There is no basic process involved. I could see the wreckage was the bridge-deck of a catamaran. But it had some unusual elements to its construction. Everything appeared to be built out of a cored material, including the bulkheads. It also had a few strange fittings, including trampoline fixture railings fastened directly to the forward section of the bridge-deck, a small nacelle moulded into the bottom of the bridge-deck and a couple pad-eyes located just under the trampoline track and outer ends – a strange fitting I had not seen on a catamaran before.

So, I wrote to a number of yacht designers – a few of them just wrote back saying they could not help but a few of the replies said that the design and construction looked a bit “French” – a light boat construction and methods used of putting a boat together.

I then put the puzzle on the table of a cruising forum and had access to cruisers around the world to assist me solving the puzzle. A few responded positively but I received a huge amount of vitriol from people thinking I had no idea what I was doing, I was crazy, I was just a plain idiot and other opinions that had nothing to do with finding an answer – the Internet is truly a strange place with a lot of strange people!

6) You contacted Samsa for a list of missing yachts. In addition to matching physical attributes of wreckage with yacht design. Does the process involve tracking currents / winds etc?

I did not contact SAMSA directly – I asked the editor of a local magazine to do it for me as he had a reasonably good relationship with them. SAMSA supplied a short list of 5 boats abandoned or lost in the Atlantic Ocean over the past five years. I checked all of them and found them all to have been monohulls, thus eliminating them all. However, they never bothered to include abandoned or lost yachts in the Indian Ocean. I then made a short list of catamarans that had been abandoned and was able to eliminate all of them with the exception of one.

The currents and wind information is available in the form of paper planning charts and show one thing – flotsam that originates in a hemisphere, will normally be moved around by the currents and winds and will mostly remain in the hemisphere. But, it will not necessary remain in the same ocean – they can move from one ocean to another. An example of this was the first Hugo Boss racing boat that was abandoned in 2006 about 1000 nautical miles from Cape Town. The well preserved wreckage was found in 2016, washed up on the southern Patagonian coast – is had been swept through the southern Indian Ocean, around the bottom of Australia and New Zealand and across the entire southern Pacific Ocean to be swept ashore in Patagonia. This is a drift of over 13,000 nautical miles in 10 years – well, nobody knows how long it had been onshore in Patagonia before it was discovered. It could have been for a few years. So, as a sailor we use currents and winds to move around, normally trying to keep “going with the flow”. So, I have studied them for years and know their power and ability to carry a sailing boat around the world, preferably the right way up – sometimes not! 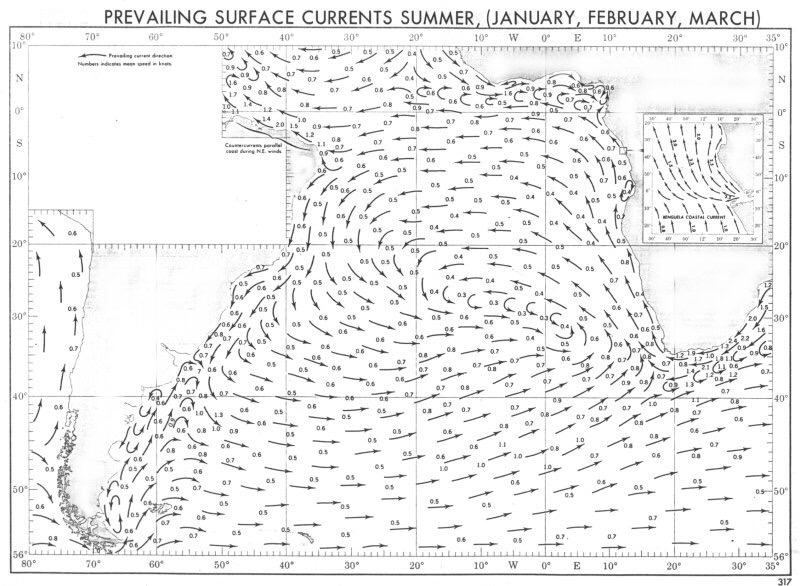 7) Presumably there is a typical circulation of flotsam / jetsam. Is St Helena quite a common ‘destination’ for wrecks in the southern ocean?

Hell, no. The likelihood of a large chunk of a vessel, abandoned in the Indian Ocean and swept by the currents and winds down to Cape Point and then all the way up the west coast of southern Africa, curve around and hit the only small chunk of rock known as the Island of St Helena, measuring about 7 x 15 km in size, is quite remarkable. But yes, flotsam does wash up there, but due to the form of the island with no easily accessible beaches, most flotsam will just stay out at sea and be swept away towards the South American coast and get washed up there.

8) You clearly have an interest in this work.  Have you helped with other investigations or conducted any out of curiosity?

No, I have been involved in a few rescues in various locations around the world but, it has only been over the past few years I have offered my knowledge to help solve or gain information with regard to helping others. I do it purely as a pastime and do not charge any fee for my time or help.

9) Regarding the latest find in St Helena, you also had dealings with R&C. Presumably they ruled out any match with their design. What made you think of Llamo Lo?

Yes, I spoke to a member of their design team who confirmed what I already had known – the wreckage was not one of their designs. I just needed that to be 100% confirmed.

10) Was it easy to track down the former crew members?  What was their reaction to seeing the footage?

I contacted him and sent the photographs to him. He immediately came back to me saying that it was definitely the wreckage of the Llama Lo due to one of the photographs. It was of an escape hatch that had bolts through where the handles had been. He told me he had done that as, whilst sailing, the hatch had been leaking profusely. He and Jean had discussed this problem and Kyle had been tasked to remove the plastic handles and replace them with some long bolts and then dogged the hatch down using a baton on the other side. So, wreckage identified.

11) Nice to be recognised by the St Helena government. Does this success motivate you to search for other lost vessels?  What’s next for you?  Are you busy with any other interesting projects of this kind?

Yes, it was good to be recognised. However, let’s hope that there are no other lost vessels that need a mystery to be solved. Basically, my future plans are to do a bit of cruising, visiting countries and places I have been to before, but never had the time to explore whilst doing deliveries – doing deliveries is a go-go affair and leaves little time to get to know the countries and places you stop at.