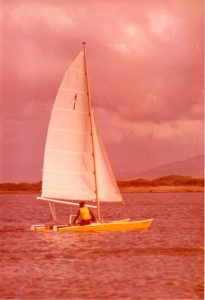 BOATING SA:  Your background in SA. Where did you grow up and how did you first get into design?

DIX:  I was born in Cape Town and grew up at Zeekoevlei. My dad was a Provincial champ in the FD class, so I grew up around boats. I have always owned at least one boat since I was about 15. I drew and built my first design in 1973/4, a 15ft plywood catamaran. I started studying yacht design by correspondence with Westlawn School of Yacht Design in 1975, while building a 36ft van de Stadt cruiser/racer. I won the 1979 Yacht Design Competition run by Cruising World magazine, with the CW975 design that I later built and sailed as “Concept Won”. Winning that competition landed me my first design commission, for a 35ft steel cruiser, from a friend, Brian Alcock. Brian later became a professional builder under the name Hout Bay Yachts and they only built my designs, from 30 to 57ft, all from steel.

BOATING SA: Which was your first successful commercial design?

DIX: My first successful commercial design was the Caribbea, commissioned by Imberhorne and later built by Nebe Boats. This was a quick little cruiser that still has a good reputation as a comfortable small family cruiser. My most commercially successful design has to be the Didi 38, of which the prototype was my own “Black Cat”. That boat caught the imagination of amateur boatbuilders worldwide and spawned all of the radius chine plywood designs that I have drawn since then, producing cruiser/racers, box-rule racers, modern trailer-sailers, modern classic cruisers and catamarans. Nearly 1/3 of my current design range would not have existed without the Didi 38 to start the process.

BOATING SA: When did you move to the US and why? Where do you currently live?

DIX: We moved to USA in January 2004. My business is very mobile and can operate from almost anywhere in the world that I have access to electricity and the Internet. We were very reluctant to leave SA but opportunities for the next generation were looking ever more bleak, so we decided to move to give our daughter more opportunities for her future. We now live in Virginia Beach, at the mouth of Chesapeake Bay.

BOATING SA:  How is it over there?  Biggest benefit?  Biggest challenge?  What do you miss most about SA? How is the sailing scene that side?

DIX: Life has its challenges wherever one chooses to live. USA is an expensive country to live in. I lost some of my international market when we moved, from people who don’t like the USA. But that has rebuilt over the years and I now have a good market in Russia and Eastern European countries. I have managed to build a good relationship with the Wooden Boat Group, who publish Professional Boatbuilder, Wooden Boat and some smaller magazines, as well as organising the annual Wooden Boat Show at Mystic Seaport. My builders have brought them some very interesting boats at the Wooden Boat Show, boats that are out of the mainstream of North American wooden boatbuilding and attract attention. What I miss most about SA is my many deep friendships built up over 6 decades, the sailing scene, the great surf and the beauty of Cape Town. I am not a member of a yacht club here and sail my dinghies (Paper Jet and Argie 15) from public launch ramps. I sometimes sail in the 150 mile Chesapeake Bay Schooner Race from Baltimore Maryland to Portsmouth Virginia but am not doing any club racing.

BOATING SA: Are you following SA’s economic / political fortunes?  Is SA a story over there, or just a faraway speck?

DIX: We follow what is going on in SA through family and news reports. The water crisis in Cape Town has suddenly brought SA into the spotlight, everyone knows about that. The socio-political scene in SA is not of interest to most Americans. They know that apartheid has gone but know nothing of what has happened since then.