The South African Maritime Safety Authority (SAMSA) and the South African Police Service Forensic Fire department are in the process of investigating the cause of the fire on board a Cruising Passenger Vessel  that led to the death of four people at Hartbeespoort Dam north of Pretoria on Saturday the 19th of November 2016. 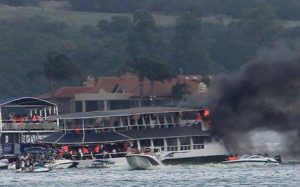 SAMSA will also from today start taking witness statements from all the involved and or affected parties, with primary focus on the cause of the fire.

The vessel, named Prime Time (DTD 1523 R), caught fire while cruising on the dam. The vessel is certified by SAMSA to carry two hundred passengers plus 3 crew on board. Initial investigations indicate that the vessel caught fire in the after part (rear of the vessel) where the kitchen, the bathrooms and the outboard motors (engines) are situated.

Presently, SAMSA can confirm the following;

SAMSA and the Department of Transport also send their condolences to the families of the deceased following this tragic incident.  (Source: SAMSA)