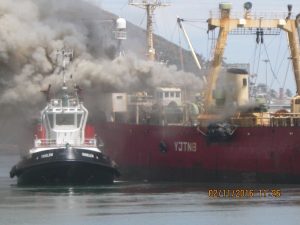 The following is an update on the fire reported on 2 November 2016 on board the MFV “Verano”, a fishing trawler berthed at quay 703 in the Port of Cape Town:
• The fire situation on the vessel continues to be at a moderate condition;
• An oil boom was deployed around the vessel to prevent any pollution that could occur and plans are underway to deploy an extra boom as a further mitigation;
• Transnet National Ports Authority’s Fire Department and the City of Cape Town Fire and Emergency Services are on site to apply boundary cooling from the tug and from three fire hoses on the quay respectively;
• The wind direction changed to a south easterly pushing smoke seaward away from the Container Terminal, thus not hampering cargo operations.
• The cause of the incident remains undetermined;
• Transnet Port Terminals Container Terminal is fully operational;
A Joint Operating Centre (JOC) are active on a 24 hour basis to manage the operation on quay 703. (SAMSA)
Share this: