PRESS RELEASE: The South African Maritime Safety Authority (SAMSA) is continuing with investigations of a Taiwanese fishing trawler nabbed off the southern part of the Indian Ocean and detained in Cape Town at the weekend on suspicion of illegal activity. 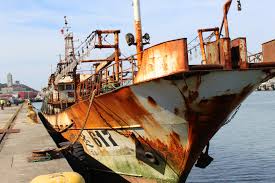 The arrest of the vessel, known as the Chin Jen Wen, was conducted by the Department of Agriculture, Forestry and Fisheries (DAFF) late last week after the trawler was spotted through the department’s Vessel Monitoring System (VMS) apparently entering the country’s Exclusive Economic Zone (EEZ) from Mossel Bay towards  Cape Town.

According to DAFF, suspicion had been aroused as the vessel had not applied for permission to be in the area. Fisheries protection vessels including The Victoria Mxenge were then set successfully on its pursuit and arrest eventually culminating in its detention at the port of Cape Town.

While in detention under the Marine Living Resources Act, according to DAFF spokesman, Ms Bomikazi Molapo, the vessel would undergo a thorough inspection conducted by all relevant law enforcement stakeholders, including SAMSA – the country’s maritime safety authority.

The Taiwanese trawler is the latest to be arrested and detained by South African authorities in 2016 due to suspicion of illegal or unauthorized fishing activity on the country’s waters.

In a recent incident also off the Indian Ocean along the Eastern Cape coast, a set of Chinese fishing vessels were arrested on suspicion of illegal activity. While initially suspected of illegal fishing, owners were eventually fined for a variety of law transgressions relating to general management of the vessels.

In Pretoria on Thursday last week, Ms Molapo said: “The Minister has undertaken to intensify the fight against any form of illegal fishing in our exclusive economic zone to ensure that our resources are utilised for the benefit of the country to reduce poverty and ensure food security for all. South African waters remain a sovereign jurisdiction and its marine living resources will be protected by the Department,” she said.

In Cape Town at the weekend, the Taiwanese vessel was inspected by SAMSA to ensure that it complied with all relevant international maritime conventions relevant to that type of vessel. SAMSA also used its jurisdiction as a Coastal State to ensure that the vessel was of no threat to the State from a safety and pollution perspective.

The investigation established that the vessel was non-compliant with International Convention for the Prevention of Pollution (MARPOL) as there was no record in the Oil Record Book of oily waste having been landed ashore or discharged through the oily water separator. The vessel remains in detention pending finalization of the inspection on Tuesday.