A group of student sailors are planning to turn their racing yacht into a science lab during next year’s Cape to Rio race. 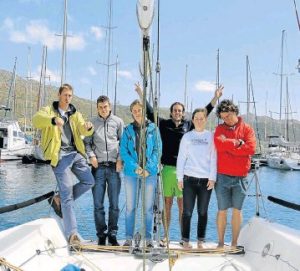 The six students from the University of Cape Town have teamed up with the South African Weather Service to collect valuable data during their trip. They will deploy three ‘surface drifters’ to gather environmental information such as sea surface temperature and sea level pressure. “Additionally, the team will be contributing meteorological observation data to the Voluntary Observing Ship (VOS) Climate Fleet,” the group said in a campaign statement. “This programme has been running since 1984 and data collected allows for a greater understanding of the role of oceans in the global climate system.”

“On their return, the team will host information sharing events regarding their observations as well as provide more information on the the international databases to which they will contribute. It is the hope that the data collected can educationally benefit not only students at UCT, but all over the world,” they said.

The group hope to raise R700 000 to help fund their campaign, but have apparently vowed “to row to Rio if they have to”. The campaign is backed by UCT’s Oceanography Department and aims to raise awareness about both the University’s SEAmester programme — described as “a floating university experience” on the polar research vessel the SA Agulhas II – and the Antarctic Circumnavigation Expedition (ACE), which involves 55 researchers from 30 countries.

The 44th edition of the 4000 nautical mile Cape to Rio Yacht Race starts on January 1 next year.

To assist the students contact Mikhayla Bader on mikhayla.bader@gmail.com or 079 888 9044.