His comments follow the launch of the second Balance 526 catamaran this past weekend, with a third due to be delivered to an American buyer early next year.

Berman told MIASA the Balance 526 had fulfilled expectations to become a market leader, thanks largely to a ‘dream team’ of South African and American expertise. “We set out to create a sort of BMW M series catamaran,” said Berman, who owns The Multihull Company in the US. 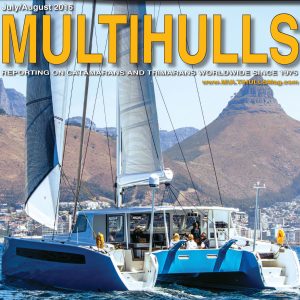 The boat is fast earning an international reputation. It featured on a recent cover of Multihulls Magazine, where it was described as “truly in a class of her own”. The first in the series was launched last year.

Berman, who also owns US-based Balance Catamarans, believes his SA joint venture illustrates the benefit of international collaboration in the boatbuilding industry. The project began a little over three years ago when he teamed up with Nexus and its highly-acclaimed production & design team, which includes Jonathan Paarman, Phil Harvey formerly of Gunboat, and naval architect Anton du Toit.

Paarman said the team planned to “slowly ramp up production” without compromising on quality. “We never want to become a full-on production yard pumping them out,” Paarman said. “Our product is special and when you step aboard one of our catamarans you can see the difference from your average ‘pop-them-out-the-mould’ builds.”

MIASA chief executive Vanessa Davidson welcomed the team’s success: “Balance Catamarans and Nexus Yachts continue to innovate and produce an exceptional quality catamaran. Based in the small coastal town of St Francis Bay they are testimony to the fact that world class boat building skills are not just found in the metropolitan hubs of South Africa.”